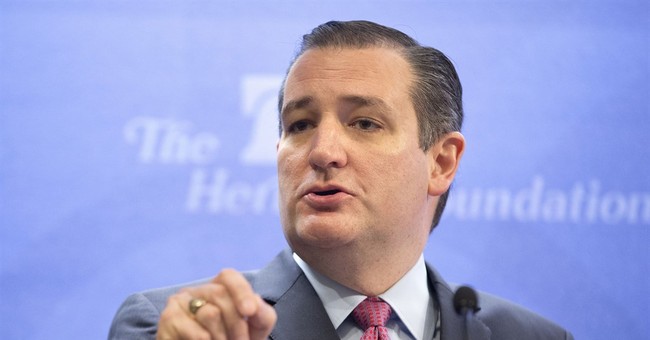 During the most recent presidential election, non-candidate Donald Trump crowned himself king of the "birther" movement, with his constant questions about whether President Barack Obama was born in Kenya or the United States. Now (it pains me to say) Trump is the GOP front-runner, and his closest challenger in the polls is Sen. Ted Cruz of Texas, who was not born in the United States. Cruz was born in Canada in 1970. His mother was born in Delaware. His father was born in Cuba. His family moved to Texas when he was 4. Cruz had dual Canadian-American citizenship until he renounced his Canadian citizenship two years ago.

So is Cruz a "natural born Citizen," a requisite for presidential candidates under Article 2 of the U.S. Constitution? PolitiFact looked into that question and determined that Cruz probably is eligible because his mother was a U.S. citizen: "Most legal experts contend (natural born Citizen) means someone is a citizen from birth and doesn't have to go through a naturalization process to become a citizen." But it noted that the issue is not "100 percent settled," as there is no official definition.

This month, GOP political consultant-turned-analyst Tony Quinn wrote a piece for the website Fox&Hounds headlined "Ted Cruz Cannot Be President: Take Him Off The Ballot." Quinn acknowledged the conventional view that Cruz is "natural born" but argued that the Framers added "natural born" to the citizen requirement to prevent the election of a candidate with foreign entanglements.

Quinn laid out four reasons he thinks Cruz does not make the cut.

2) Every past presidential nominee was born within the United States or a possession. Calgary never was a U.S. possession.

3) While his father was serving in the Navy, 2008 Republican presidential candidate John McCain was born in the Panama Canal Zone, a U.S. possession. Even still, the Senate unanimously passed a resolution conferring "natural born" citizenship on McCain just to settle the issue. The Senate has done no such thing for Cruz.

4) Cruz was a "natural born" citizen of Canada.

I sent Quinn's piece to John Yoo, the former George W. Bush White House counsel who teaches law at the University of California, Berkeley. "This case is much stronger than people give it credit," Yoo wrote. "The Constitution requires the president to be a 'natural-born citizen.' But no one is sure what it means. It's never been the subject of a definitive judicial ruling." Yoo thinks the term applies to citizens "born in the territory of the United States." That's a credible position that takes into account the Constitution's likely original intent.

Do I believe the men who drafted the Constitution wanted to keep foreigners out of the Oval Office? Of course I do. Does Ted Cruz care about the Framers' original intent? Usually, he does. I asked Team Cruz to respond specifically to the argument that "natural born" means born in the USA or a U.S. territory. No reply.

This truly is an issue that voters will have to sort out. Heidi Cruz, the candidate's wife, told a group in Missouri she expects Trump to play the birther card. She may be right. But will it stick to a candidate born in Canada?