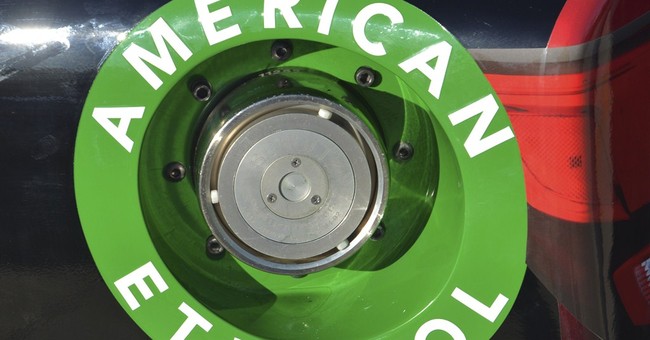 When President George W. Bush signed legislation to expand a federal requirement to blend gasoline with ethanol in 2007, he could claim with some credibility that he was pushing a renewable alternative to fossil fuels, on which Americans were so dependent. Yes, there were skeptics. I was one of them. But the Bush Renewable Fuel Standard flowed with the mainstream of American politics. In the 2008 presidential election, Sen. Barack Obama, D-Ill., was a big booster of the ethanol mandate.

Every year since then, ethanol has been harder to defend. A 2008 study published in Science magazine found that corn-based ethanol increases greenhouse gas emissions instead of reducing them. A 2009 study concluded that plowing fields to grow corn for ethanol could release more carbon dioxide into the atmosphere than ethanol offsets.

FactCheck.org looked at ethanol and found U.S. Department of Energy-sponsored research that concluded that ethanol reduces greenhouse gases. But it's hard to believe that the ethanol mandate is good for the environment when the Sierra Club, the Environmental Working Group and Friends of the Earth oppose the federal program. The Sierra Club describes claims that ethanol reduces carbon input as "extremely dubious."

Ethanol has fallen out of favor largely because it eats up so much of the corn supply. Some 40 percent of the U.S. corn crop goes into gas tanks, not stomachs. As demand for corn has risen, so have food prices. As the cost of feed has risen, so have beef prices. ActionAid USA and other anti-poverty groups also oppose ethanol supports.

Sen. Dianne Feinstein, D-Calif., has worked across the aisle to end ethanol supports, in part to spur the production of biofuels with smaller environmental footprints. This year, to her undying credit, she joined with Sen. Pat Toomey, R-Pa., to sponsor the Corn Ethanol Mandate Elimination Act of 2015.

Matt Dempsey, a former staffer for Sen. Jim Inhofe, R-Okla., of climate skepticism fame, has watched the left and right come together against ethanol for a decade. Now in public relations for the pro-business Center for Regulatory Solutions, Dempsey has been busy alerting states about the high cost folks outside Iowa pay for ethanol. Ethanol gets fewer miles to the gallon than gasoline. Thus, his group estimates that since 2005, the renewable standard has cost Californians an extra $13 billion at the pump.

With such a political heavyweight as Feinstein leading the opposition, you would expect California Democrats to support an effort that helps families keep groceries on the table. It says something about the political heft of the ethanol lobby, however, that House Minority Leader Nancy Pelosi co-signed a letter with fellow Democrats that urged the Obama administration to "keep in mind the need to reduce carbon pollution" as the president heads to the United Nations climate conference in Paris. The Environmental Protection Agency must release three-year ethanol standards by the end of the month, and Pelosi supports "a robust renewable fuels rule." Read: more ethanol.

Dempsey described the Pelosi letter as "a head-scratcher." He said, "It really stands out as one of the more bizarre moments for Pelosi." The only way it makes sense, Dempsey added, is if Pelosi wants to provide cover for the Obama administration to uphold a mandate that bites into everyone's wallet but, it seems, does not decrease greenhouse gases. Pelosi has to know how bad Obama would look touting ethanol as a tool to combat climate change. To pull off that stunt, Obama should avoid the City of Light and instead head for Iowa.