When in Riyadh, Don't Do as Royals Do 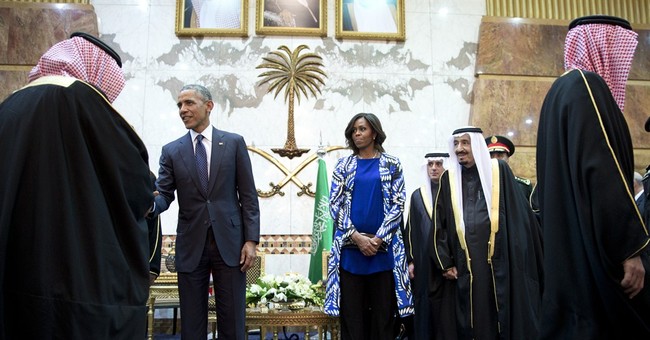 Trending
First lady Michelle Obama made an important statement when she showed up in Saudi Arabia with her husband Tuesday to mourn the death of King Abdullah and meet successor King Salman. Though the first lady dressed in a fashion respectful of Saudi custom -- in black pants and a long, loose jacket that fully covered her arms and legs -- she did not don a headscarf. Saudi women do not have that choice. Thus, the first lady made a fashion statement that sent a politely assertive message to the all-male Saudi delegation.

I approve. Saudi women cannot drive. Saudi law requires women to get a man's permission to go to college. In 2011, King Abdullah granted women the right to vote and to run for office starting this year. The kingdom's religious police, known as mutaween, infamously enforce dress codes and restrictions to segregate men and women in public. "Their low point came in 2002," New York Times columnist Maureen Dowd wrote during a fact-finding trip in 2010, "when they notoriously stopped teenage girls without head scarves from fleeing a fire at a school in Mecca; 15 girls died."

American presidents have been forced to walk a tightrope when dealing with the Saudi royal class. On the one hand, the oil-rich Saudis are valuable allies in the often hostile Middle East. On the other hand, the kingdom has a dismal human rights record -- and women are not the only victims. A Jiddah court recently convicted blogger Raif Badawi for "adopting liberal thought" and "insulting Islam" and sentenced him to 10 years in prison and 1,000 lashes.

Accompanying President Barack Obama to Riyadh, House Minority Leader Nancy Pelosi also eschewed a headscarf. In 2007, GOP hopeful Mitt Romney faulted the then speaker for wearing a scarf when she visited Syria in 2007. Actually, Pelosi wore a knee-length suit during her visit with President Bashar Assad, although she donned an abaya with a headscarf when she visited a mosque -- which shows she has good manners.

When you think about it, the first lady and Pelosi had little choice but to eschew scarves in solidarity with their Saudi sisters. It's hard to rail about the alleged Republican "war on women" if you cozy up to a government that won't let women get behind the wheel.

Some Muslims used social media to slam Michelle Obama for cultural insensitivity. Not Zahra Billoo, executive director of the Bay Area chapter of the Council on American-Islamic Relations. "As an American Muslim woman, I see it as a nonissue," Billoo told me. Billoo wears a headscarf. She sees it as her choice to dress modestly and Michelle Obama's choice to not wear a headscarf. What about the men in the Saudi delegation who would not shake hands with Michelle Obama? "That's their personal choice," Billoo answered.

Lucky Saudi men. They have choices.