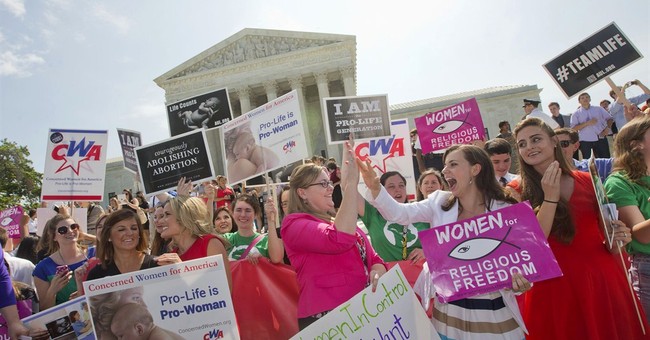 How did women get birth control before President Barack Obama's Affordable Care Act? Before Obamacare, a woman could go to a doctor and get birth control. She often had to pay or make a copayment for contraception. But in the 2014 political lexicon, that means she had no access.

On Monday, the Supreme Court issued its 5-4 Hobby Lobby decision, which recognized family-owned corporations' religious right to not offer contraception mandated under the Affordable Care Act in their employee health insurance plans. In her dissenting opinion, Justice Ruth Bader Ginsburg charged that the ruling would "deny legions of women who do not hold their employers' religious beliefs access to contraceptive coverage that the ACA would otherwise secure."

The Obama administration broadly prescribed what constituted health insurance coverage in 2012 when the U.S. Department of Health and Human Services announced that contraception constituted essential preventive care. Hence, under Obamacare, birth control is exempt from copayments and mandatory in most employer-sponsored health plans.

What if employers have deeply held religious objections against contraceptive methods that they consider to be abortion-inducing? Surely, the Obama administration expected resistance.

It came from Hobby Lobby CEO David Green, who, as a devout Christian, had been providing health care to his 13,000 full-time workers for years. The company plan included contraception -- but not four methods that Green and his family believe "risk killing an embryo." In a court brief, Hobby Lobby objected to being forced to be "complicit in abortion."

If the Obama administration were tolerant, then the White House could have worked to accommodate dissent by allowing employers with demonstrated religious beliefs to opt out of Obamacare.

Indeed, the Affordable Care Act already exempts grandfathered employer-sponsored health plans -- which means about a third of workers have health coverage that does not include birth control. Obamacare also exempts small employers from the contraception mandate. Surely, if the Obama administration can exempt millions of workers for reasons of political expediency, then it can find a way to exempt the rare corporation with strong moral objections.

Mark Rienzi -- senior counsel of The Becket Fund for Religious Liberty, which represented Hobby Lobby in court -- hailed the ruling as "a great decision for freedom and diversity." In a free country, he argued, the government knows that "the answer is not to crush people for having different beliefs."

Justice Samuel Alito Jr. wrote for the majority: "There are other ways in which Congress or HHS could equally ensure that every woman has cost-free access to the particular contraceptives at issue here."
Here's a radical idea: If Washington wants to make birth control free, let Washington pay for it.
Here's another radical idea: To paraphrase the U.S. Constitution, let Washington pass no regulations prohibiting the free exercise of religion.