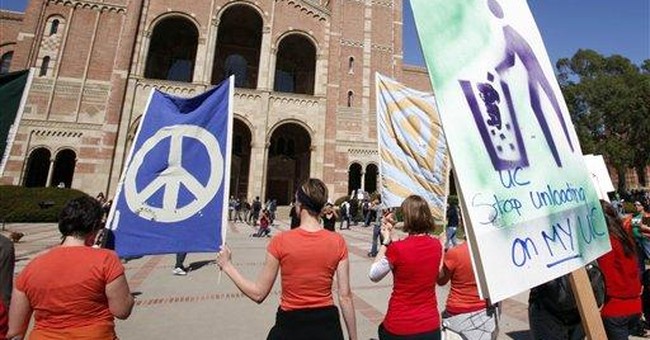 If you think that academia is not the exclusive playground of the academic left, consider the fate of UCLA epidemiologist James Enstrom.

In 2008, Enstrom thought that a report on the health effects of diesel emissions presented by the California Air Resources Board was faulty. As it turns out, CARB's nitrous oxide emission estimates were overstated by 340 percent. Enstrom and others had trouble believing that a Ph.D. statistician would make up some of CARB's findings. They dug around and found that CARB researcher Hien Tran had falsely claimed to have a doctorate in statistics from UC Davis. In fact, Tran had a master's degree from UC Davis, but his doctorate came from an unaccredited school.

CARB has since scaled back the diesel regulations it had previously approved -- although spokesman Stanley Young asserts that the policy change "was not related to the research" -- which officials have maintained were overestimated because of calculations made prior to the recession. CARB did demote Tran and cut his monthly pay by $1,066 to $7,899 per month.

In February 2010, after renewing his research grants regularly since 1976, UCLA notified Enstrom that he had lost his funding. Unlike Tran, he would be out of a job.

A July 2010 memo later informed Enstrom that Department of Environmental Health Sciences faculty had determined his work did not meet department requirements and "your research is not aligned with the academic mission of the Department."

Not aligned with the academic mission? That reads like academic-speak for: politically incorrect. Enstrom has little doubt that UCLA cut his cord because he was a CARB whistle blower. Worse, his 2005 study on the health effects of fine particulate matter essentially found that the diesel exhaust has slight, if any effect, on premature death.

"The timing is almost unmistakable because I had essentially no problems for a position that started July 1, 1976," Enstrom told me over the phone. "This is extremely dangerous for academic freedom and scientific integrity."

Enstrom has been fighting his sacking. Last week, the university held hearings on his case. The university won't comment, citing privacy issues.

The Foundation for Individual Rights in Education has taken up Enstrom's cause in the name of academic freedom. FIRE Vice President of Programs Adam Kissel explained, "We don't know who's right or wrong on the science, but we know that everyone has a right to challenge one another on the quality of the science if they do it in good faith."

CARB research chief Bart Croes said Enstrom's fine-particulates health study was not "inconsistent with ones we've used in our work," but he saw "deficiencies" in Enstrom's methodology. Some critics suggest that while his study aligned with other research, and has been cited by the U.S. EPA, his test group was too old; besides, Enstrom is too stingy with caveats and too activist in his interpretations.

Maybe the critics are right. Or maybe that's how they always go after conservatives. It's not simply that they disagree, it's that the scientist in question doesn't meet this hallowed academic standard that is rarely if ever applied to left-leaning scientists/activists. They believe in academic freedom, but that doesn't mean they should have to tolerate dissent.