When It Comes to Earmarks in DC, It's 'E Pluribus Oink' 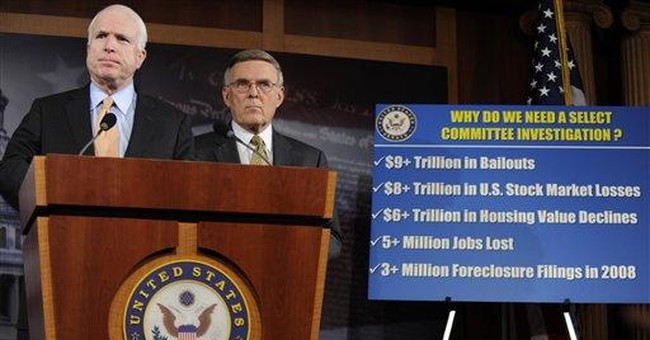 When he ran for president, then-Sen. Barack Obama argued that earmarks account for a mere "0.5 percent of the total federal budget," so eliminating earmarks would not solve the problem.

With that attitude, they ought to put up a new Welcome to Washington sign that reads: Prodigo ergo prodigo. I spend, therefore I keep spending.

Believe it or not, that's good news. As CAGW President Thomas A. Schatz told a Washington news conference last week, after "Congress has approved $700 billion for the bank bailout, $862 billion for the stimulus, a $3.6 trillion budget, a $1.4 trillion deficit, there's a little bit of good news for taxpayers: Earmarks are reduced from fiscal year 2009." Indeed, they're down 15.5 percent from $19.6 billion in 2009.

Drew Hammill, spokesman for House Speaker Nancy Pelosi, credited the "long list of reforms" the speaker began implementing in 2007. Members are supposed to place their names next to earmark requests and provide letters explaining where and why the money will be spent. In March, House Democratic leaders banned the practice of doling out big-dollar earmarks to private contractors.

The next day, the House Republican Conference countered by pledging not to request earmarks for one year, a notion the Dems considered and then rejected.

I can only say: It's about time, and the Republicans had better keep their word. As CAGW rightly noted: "After Republicans took over Congress in 1994, pork-barrel projects started to be used as a currency of re-election. Over the following decade, they became a currency of corruption, and the explosion in earmarks to their peak at $29 billion in 2006 helped erase the Republican majority."

Rep. Tom McClintock, R-Calif., who was elected in 2008 to replace the earmark-happy and scandal-plagued Republican Rep. John Doolittle, told me that there's a "new attitude" among House Repubs, in part because "a lot of those folks were replaced in the '06 and '08 election cycle."

According to CAGW, 48 members of Congress -- 37 Republicans and 11 Democrats -- were not requesting earmarks this year. Within 24 hours of the pig book's release, Sen. Bob Corker, R-Tenn., joined their ranks when he announced he would reject earmarks on the grounds that the appropriations process is "fundamentally flawed and lacks oversight."

Meanwhile, the Senate has no restrictions on earmarks. The Senate, you may recall, appropriated more than $200 million for Alaska's infamous "Bridge to Nowhere" when Republican Sen. Ted Stevens represented the state.

During the 2008 campaign, Obama pledged to reduce earmarks to less than $7.8 billion, the level where they were before 1994. Despite budgeting a whopping $3.6 trillion in federal spending this year, however, Obama and House Democrats can't shake the necessary pennies from the earmark piggy bank.

And Obama is just plain wrong that $16.5 billion is such a paltry sum that it does not make a difference. As Schatz noted, "When a member of Congress who might otherwise be fiscally conservative gets an earmark, the chairman of the committee will say, 'I'll give you an earmark if you support my bill.'" Thus, a $100,000 earmark for the local opera house turns into a vote for an omnibus spending bill in the billions.

Allow me to note that Obama and Schatz like to use 1994 -- the year the Republicans took over Congress, but President Bill Clinton retained veto power -- as a benchmark. Yet according to CAGW's own numbers, earmarks rose from $3.1 billion in 1991 -- the year of the first pig book -- to $6.6 billion in 1993, when Democrats controlled the White House, House and Senate. Define earmarks as a GOP-fueled phenomenon at your own risk.

In a recent town hall meeting, Obama returned to his earmarks-as-small-change rhetoric when he noted, "Earmarks, you know, pork projects, what everybody calls pork, those account for about 1 percent of the budget."

And if Washington can appropriate what CAGW described as "35 anonymous projects worth $6 billion" in the 2010 Defense Appropriations Act despite new rules that are supposed to deliver complete transparency, then the rules mean nothing.

McClintock described earmarks as inherently "unworthy projects" because they bypass the competitive process. But "even if there is such a thing as a good earmark, the price invariably is all the other earmarks that" are not good.

Unfortunately, that's a price Congress has been all too willing to pay -- because, well, Congress doesn't have to pay it.