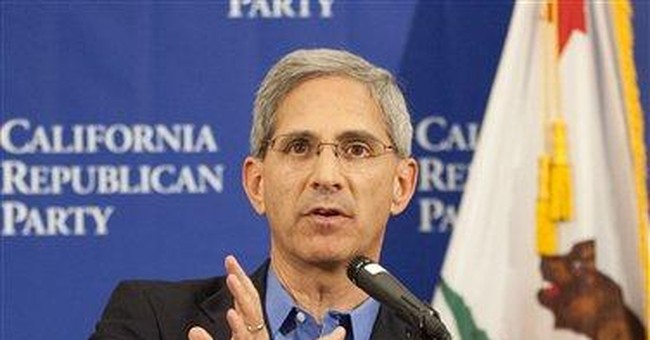 At first, it seemed like a bonehead move. On Monday morning, the campaign for Insurance Commissioner Steve Poizner's bid for the governor's office sent out an e-mail announcing that the candidate would hold a news conference at its headquarters. I was not the only journalist to wonder: Does this mean that Poizner is getting out of the race -- leaving the GOP primary to Ms. Moneybags, former eBay CEO Meg Whitman?

As it turned out, it meant that Poizner, who is about 30 points down in the polls, is less willing than Whitman to pour the millions he made as a Silicon Valley pioneer into the race. He was in desperate need of an excuse to put Whitman in a bad light. So he played -- overplayed -- the victim card.

Poizner released an e-mail that Whitman adviser Mike Murphy sent to a Poizner pollster, in which Murphy observed that Whitman was willing to spend $40 mil or more "tearing up" Poizner if he stays in the primary, whereas Poizner could enjoy full GOP support if he instead ran for a U.S. Senate seat in 2012. Team Poizner also released a letter sent to the FBI, the U.S. attorney's office and California Attorney General Jerry Brown (the presumed Democratic gubernatorial nominee), asking each to investigate Murphy's "misconduct."

In 1986, the state Sen. Ed Davis accused then-Rep. Bobbi Fiedler of trying to entice him out of the GOP primary for U.S. Senate. There was no prosecution, but both campaigns tanked. A fellow Republican called Davis' gambit "a murder-suicide."

Wednesday morning, when Poizner and I met for coffee -- in his case, bottled water -- I had to ask: You don't seriously think anyone is going to prosecute Murphy for this, do you?

"We're hoping you would," Poizner answered, as he began talking about the imperious Whitman strategy -- that is, throwing millions of dollars into the race to bankroll radio ads, ducking debates, generally avoiding California media and rigidly cleaving to a script. As Poizner said at the news conference, Whitman "doesn't want to run against me. She wants to be ordained."

Wrong, says Whitman press secretary Sarah Pompei. "Meg's looking forward to a spirited campaign, and believes that her experience and leadership and ideas make her the best candidate, not only in the primary, but in the general (election)."

But the Whitman campaign is about as spirited as a talking doll. While Poizner mixes it up with such groups as the California Newspapers Publishers Association, Whitman seems to be hiding in an undisclosed location.

Pompei says that Whitman has given 150 interviews -- but many of her appearances are on friendly radio venues or with East Coast talking heads, who don't know what to ask a would-be California governor. Whitman even has refused to debate Poizner at next month's state GOP convention.

Either Whitman Inc. is choreographing a dazzling surprise candidate rollout, or Whitman is a breathtakingly bad candidate. Maybe you can run a business that way, but you can't run a state by buying 30-second spots and ducking tough questions.