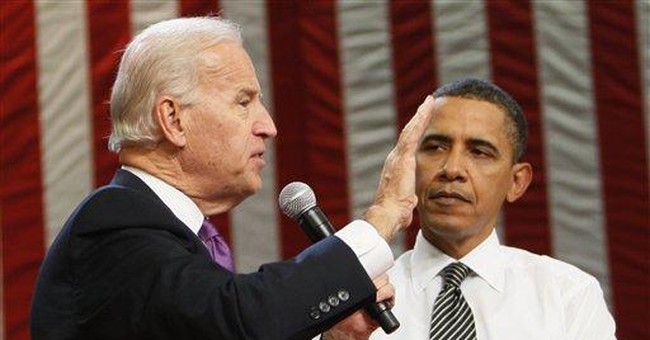 It all looked so easy in August 2008, when Sen. Barack Obama spoke before the Democratic National Convention in Denver. The Democrats were going to win in November, storm Washington with their reforming ways, and because they were so much smarter than everyone else, they'd know how to get the American economy cooking. There was no doubt as the enthusiastic Invesco Field throng cheered and chanted, "Yes, we can."

After the Democrats squeezed floor votes for unpopular health care legislation through the House and Senate, independent voters are turning on Obama, conservatives never warmed to him and the far-left base feels betrayed. It turns out that governing is a lot harder than lobbing mud and vitriol at the Bushies.

Perhaps that is why, after having won office, Obama can't stop.

The Democrats own the White House, the Senate and the House. If they want to, they can pass their own bill. But they can't. Obama can't make centrists in his own party vote for the final passage of a bill that their constituents vehemently oppose. That leaves him two choices: Pass a doable and more fiscally responsible bill -- yes, it will anger the base, but isn't that what Democrats used to argue George W. Bush should do? Or try to fob his own failure off on Republicans, while saying out of the other side of his mouth that he won't give up "on trying to change the tone of our politics."

Of course, Obama's big problem is that he cannot deliver more private sector jobs with a health care agenda that will discourage hiring, a global-warming plan that threatens to hobble industry and -- despite his too-modest spending "freeze" proposal -- huge deficits that have spooked the public.

His too-into-the-future spending "freeze" sounds nice. But do I believe? The president noted that Washington's annual deficit had exceeded $1 trillion before he entered office, because of "two wars, two tax cuts, and an expensive prescription drug program." So his remedy is continued runaway spending while fighting two wars, passing his own extra tax cuts and peddling an underfunded and overweening health care package? Where's the change?

Donning the mantle of reformer, Obama said he wanted to require that lobbyists disclose their contacts with his administration or Congress to erase the public's "deficit of trust." Why bother? Voters are angry about all the grease that changed hands out in the open.

The White House very publicly cut a deal with union leaders to exempt union and government workers from the Senate bill's 40-percent excise tax on employer-paid "Cadillac" health care plans. Then there were the very open giveaways handed to Sens. Ben Nelson, D-Neb., and Mary Landrieu, D-La. to win their support. Nebraska voters were so outraged that Nelson has since distanced himself from his own big-dollar bargain.

"I take my share of the blame for not explaining it more clearly to the American people," Obama said. "I know that with all the lobbying and horse-trading, the process left most Americans wondering, 'What's in it for me?' "

What's in it for me? Actually, it's Landrieu, Nelson and Big Labor who asked that question. Perhaps while they had their hands out, they also wondered if they dare be so brazen. And a little voice answered: "Yes, we can."