Sarah Palin: Going Rogue, Getting Even 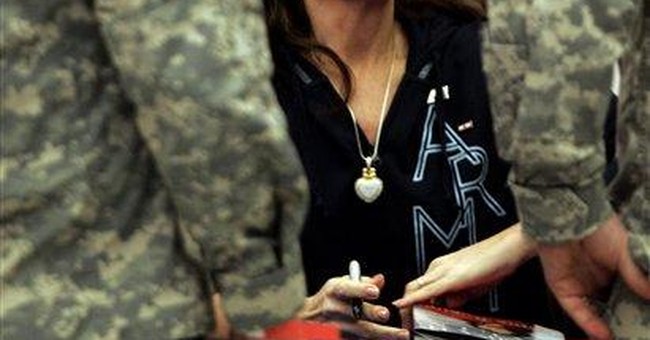 "Going Rogue: An American Life" acquaints the reader with author Sarah Palin's life and work before she was plucked from her Little House on the Tundra to serve as John McCain's running mate and turned into a national caricature.

Here you see the Alaska governor with the 90 percent approval rating, who took on not only what became known as the GOP's "Corrupt Bastards Club" but also Big Oil companies that were "just sitting on" their North Slope leases when they should have been drilling.

The 2008 campaign coverage portrayed Palin as a rigid culture warrior. Breaking with the stereotype, "Going Rogue" tells the story of a social conservative who in 2006 vetoed a bill to ban the extension of benefits to the same-sex partners of state employees because she thought it was unconstitutional. Despite her aversion to tax increases, the pragmatic Palin also championed a sales tax to fund Wasilla law enforcement.

Palin never addresses the frequent criticism thrown her way by journalists who wondered if Palin possessed any intellectual curiosity -- in light of her failure to get a passport until 2007. If she failed to roam the Tuscan hills in her junior year abroad, at least thanks to her teacher father, Sarah Heath grew up majoring in the exotic natural world around her. She knew all about the state bird (ptarmigans), the difference between glacial crevices and crevasses, as well as what differentiates the grizzly from the brown bear. Dang.

To establish her literary credentials, Palin offers quotes from Blaise Pascal and Pearl S. Buck. She was the reader of the Heath family. Growing up, she recalls reading "The Pearl," "Animal Farm" and "Jonathan Livingston Seagull" -- which probably had folks at the New York Review of Books howling. And that's OK because Palin never aspires to be seen as an intellectual -- not when she perkily observes, "Everything I ever needed to know, I learned on the basketball court."

Of course, no Sarah Palin story would be complete without a media pile-on -- and the virulently anti-Palin have been happy to oblige.

New York Times columnist Frank Rich whacked Palin for her "wide-eyed infatuation with show-business celebrities" because Palin mentioned talking to Bono and Warren Beatty on the phone. That's a choice hit, considering how star-slobbering and celebrity-waving Democrats tend to be.

Rich also went after the Alaska governor for drafting a letter from God to her family about Trig, the Down syndrome baby whom she was about to deliver. Now, I understand that in some exalted circles, it is fashionable to make fun of people's faith, even when a working mother of four is bargaining with her God as she faces the daunting prospect of bringing into the world a special needs child. So: Ha, ha, ha. Thanks for the lesson in liberal compassion.

Newsweek didn't boost its credibility with its cover of Sarah Palin in running shorts next to the headline: "How do you solve a problem like Sarah?"

The Associated Press assigned 11 reporters to "fact-check" the book. I use quotes because the article ignores big issues in the book while it selectively culls minutiae. For example, Palin writes that a Supreme Court Exxon Valdez decision went "in favor of the people." The AP story somehow ignores Palin's history in pushing for monetary damages for the victims, but instead quotes Palin having once said she was "disappointed" at the court's reduction in damages. The piece fails to give Palin credit for taking a position that put the pro-drilling Palin at odds with Big Oil -- in its trivial pursuit to bare a niggling inconsistency. AP used a lot of people to tell readers nothing.

Much ink has been devoted to Palin's salvos against McCain campaign gurus Steve Schmidt and Nicolle Wallace, whom Palin blames for over-handling her and underselling McCain. Schmidt told "Politico" that Palin's book is "all fiction."

Palin wants readers to believe that she would have been a better running mate if only McCain handlers had heeded a grassroots "Free Sarah" campaign. The problem is: Palin's failure to own up to her knowledge gaps on foreign policy -- she couldn't even answer a simple question about bad Supreme Court decisions -- suggest that if freed to just be herself, Palin may well have fallen flatter faster.

The book begins with an Arctic-centric map that shows "The View from the Top of the World." It's a nice touch that shows how insignificant and distant Washington looks from Wasilla.

While I appreciate Palin sharing the perspective, it would be nice if she had taken on many of the perceptions some voters have developed of her. There's no question that many in the media treated Palin -- and her family -- poorly. That said, Palin herself blew the Katie Couric interview, and not just because she appeared impatient. Palin herself quit her job as Alaska governor, despite her obligation to state voters. Palin herself seems happy to parade herself as the far right's favorite victim, when a serious politician would be out trying to woo skeptics.

Sarah Palin has her shtick down. She's folksy and quotable. She has delivered a book that will thrill a base that loves to shout, "They done her wrong." Her true believers will see even measured criticism as another assault on their gal. At the end of the book tour, she returns to her now-familiar role of victim, a victim on the top of her world.