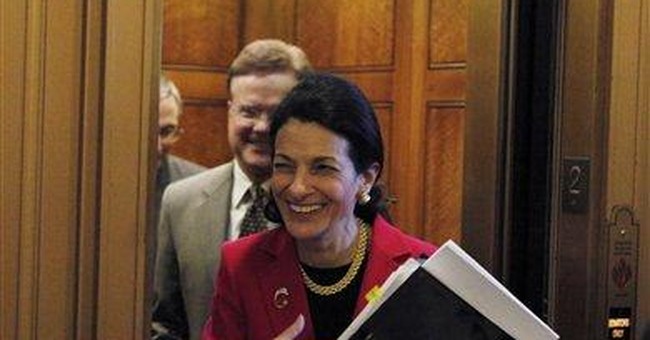 If the Democrats' health care package is so great, why are President Obama and Dem congressional leaders so hungry to share the credit for its passage with a Republican?

It's not as if D.C. Dems are opposed to hogging the glory when a federal program is popular. So why did Obama feel the need to announce after the Senate Finance Committee passed a health care measure with the support of Sen. Olympia Snowe, R-Maine, that the measure "enjoys the support of people from both parties" -- when this one bill enjoyed the support of one lone-wolf Republican?

Obama doesn't need Snowe's vote to pass a measure if he can draw the support of the Senate's 58 Democrats and two left-leaning independents. Snowe's vote was hardly pivotal, considering that the committee approved the measure by a 14-9 vote. Democrats hold a comfortable majority -- 256 members out of 435 -- in the House. So why are Obama and company so desperate to win over a token Republican or two?

Is it the idea that if ObamaCare fails, they want voters to blame the GOP? Or does the president want to be able to share the blame if a bill passes and inevitably fails to deliver as promised? No one knows what the final health care reform bill will look like, but plenty of reasons remain for voters to be skeptical. Until those who claim the mantle of reform acknowledge the cost of all the things they want to give families, they have too many incentives to over-promise and too few incentives to tell people they can't get something for nothing.

In Washington's standard hide-the-tax fashion, the Senate Finance Committee legislation would impose an excise tax on "Cadillac" employer-funded health care plans -- a 40 percent levy on premiums in excess of $8,000 per individual or $21,000 per family. So they're taxing a service to make it cheaper.

Big labor is opposed because "Cadillac" policies can be very working class. But some on the left support this scheme, in the belief that taxing health care will control costs by providing employers with incentives to offer less-generous health coverage.

If this plan passes, workers will have to pay higher premiums and/or taxes for what they already have. That's more cost shifting than cost savings.

The worst suspicions of the plan's critics thus have been confirmed. Under ObamaCare, those who have health care will be paying more -- fair enough -- but for less health care -- which is not so fair.

As for proposed limits on what insurers can charge based on age or gender -- again, these schemes don't control costs; they shift costs. And cost shifting is the practice that has led to runaway health care spending in America.

With all the freebies thrown into versions of the package -- with millions of additional people covered, no denials for pre-existing conditions, free checkups and preventive procedures -- ObamaCare can only increase the nation's health care tab.

"When history calls," Snowe said to explain her vote, "history calls." Maybe, but history can be like the Delphic oracle: It doesn't always tell you what you think you hear. The more Washington pads the guaranteed benefits package, the less incentive Americans will have to look for savings in their own health care. Snowe and the Democrats may believe that their plans will cut health care costs, but history suggests that these paper savings will not materialize.

Noem Slams Biden for Hypocritical Rules Surrounding 4th of July Fireworks
Landon Mion
Project Veritas: Here's Why Fox Corp. Allegedly Muzzled One of Their Reporters
Matt Vespa
Illinois Rep. Elects Not to Censure Marjorie Taylor Greene Following Her Apology for Holocaust Comparison
Landon Mion
So, Will Liberals Go Ballistic When They Figure Out Which Trump Positions Biden's DOJ Intends on Defending?
Matt Vespa
'Shut the F**k Up': Hollywood Actor Has Zero Patience for the Cancel Culture Mob
Matt Vespa
A Group Of Parents Sent Their Kids' Face Masks To A Lab For Analysis. Here's What They Found
Scott Morefield