It's Getting Cold Out There 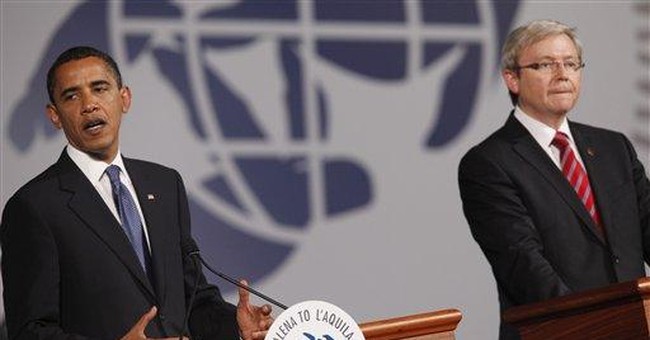 No wonder skeptics consider the left's belief in man-made global warming as akin to a fad religion -- last week in Italy, G8 leaders pledged to not allow the Earth's temperature to rise more than 3.6 degrees Fahrenheit.

For its next act, the G8 can part the Red Sea. The worst part is: These are the brainy swells who think of themselves as -- all bow -- Men of Science.

The funny part is: G8 leaders can't even decide the year from which emissions must be reduced. 1990? 2005? "This question is a mystery for everyone," an aide to Russian President Dmitry Medvedev said.

And while President Obama led the charge for the G8 nations to agree to an 80 percent reduction in greenhouse gas emissions in industrial nations by 2050, the same Russian aide dissed the standard as "likely unattainable."

No worries, the language was non-binding. Global-warming believers say that they are all about science, but their emphasis is not on results so much as declarations of belief.

Faith. Mystery. Promises to engage in pious acts. Global warming is a religion. While Obama was in Italy preaching big cuts in U.S. greenhouse gas emissions, he was losing some of his flock in Washington. The House may have passed the 1,200-page cap-and-trade bill largely unread, but Senate Democrats are combing the fine print and not liking what they see. As Sen. Claire McCaskill, D-Mo., said of the bill, "We need to be a leader in the world but we don't want to be a sucker."

Republicans who oppose the legislation are positively gleeful. For some issues, it can be more fun being part of the opposition, as Democrats are discovering.

During the last administration, Senate Dems could slam President George W. Bush for not supporting the 1997 Kyoto global-warming treaty, secure in the knowledge that they would never have to vote yea or nay on a treaty that they knew could be poison for the coal industry and family checkbooks.

That's why the Senate in 1997 voted 95-0 against any global-warming treaty that exempted developing nations like China. Now China wants none of the G8's goal for it to halve its greenhouse gases -- and the Dems are stuck with a leader who wants to save the planet.

When the GOP was in the White House, Democrats got to play scientific martyrs. James Hansen, director of the NASA Goddard Institute for Space Studies, would go running to the New York Times or Washington Post with the lament that the Bushies were trying to muzzle his pro-global-warming science. No matter how many times he appeared on TV, the stories kept reporting on allegations that Bush was censoring science.

Now GOP senators have their own Hansen: Alan Carlin of the U.S. Environmental Protection Agency. Be it noted, Carlin is not a scientist. He's an MIT-trained economist, albeit with a degree in physics from the California Institute of Technology, who has worked as an analyst at the EPA since 1974. In March, he co-wrote a 98-page paper that began, "We have become increasingly concerned that EPA and many other agencies and countries have paid too little attention to the science of global warming." He fears politics are steering what should be scientific research.

The analysis noted that global temperatures have declined over the last 11 years while carbon emissions have increased. It cited a 2009 paper that found "solar variability" may have had more to do with any warming over the last few decades than rising greenhouse gas levels. Carlin also wondered why the EPA bought into global-warming doom scenarios, when, despite increased greenhouse gas levels, U.S. crop yields are up, air quality is improved and Americans are living longer.

Did the EPA welcome a dissenting voice? Au contraire. According to e-mails released last month by Sam Kazman, general counsel for the Competitive Enterprise Institute, a free-market think tank, Carlin's supervisor told him not to "have any direct communication" with anyone in-house or elsewhere on the issue. And: "I don't want you to spend any additional EPA time on climate change."

Only later, Carlin told me, did the EPA grant him permission to post the paper on his personal website and talk to the media.

Kazman argues that the EPA's failure to post Carlin's paper officially violates court rulings that require agencies to disclose discarded evidence when making rules. And: "The bigger irony is that this administration has been touting its commitment to scientific integrity and agency transparency."

Now, you can argue that the Obama administration simply wanted to present a clear message on a policy on which it already had settled. But why is it muzzling science when Bush did it, but not worthy of a New York Times story when Obama does it?

Don't say that Obama has science on his side. As the Carlin paper noted, "We do not believe that science is writing a description of the world or the opinions of world authorities on a particular subject ... The question in our view is not what someone believes, but how what he or she believes corresponds with real world data."

The global-warming community's reaction to real-world data -- and the lack of warming in this century -- has been to remain true believers. Except now they call it "climate change."