Palin's Ship in the Harbor 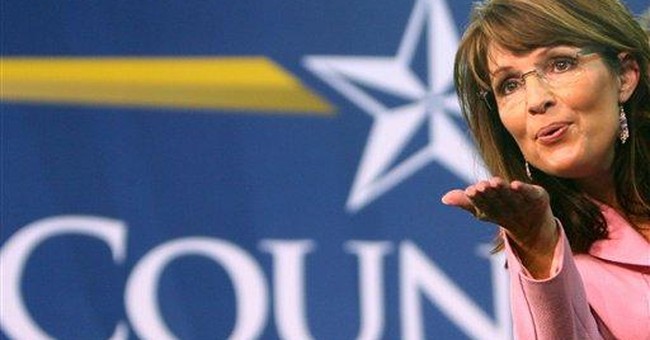 "A ship in harbor is safe, but that's not why the ship is built," Alaska Gov. Sarah Palin said last year to explain why Sen. John McCain picked her to be his running mate.

Those words may come back to haunt her. When she assumed office in December 2006, Palin committed to Alaskan voters to serve four years. Having failed to do so, she will be in no position to campaign in 2012 for four years in the White House.

As a presidential candidate, she is dead. As a professional victim on the conservative speaking circuit, however, Palin could be unbeatable. Sadly, Palin has managed to alienate many erstwhile supporters who, when McCain plucked her to be his running mate, cheered at the prospect of a reform-minded, pro-oil drilling, hunt-for-food governor and who proudly mothered a Down syndrome baby -- while looking great.

Critics dubbed her "Caribou Barbie." Such cheap personal shots only made the GOP base love her more. Pundits couldn't hit Palin for being a working mother, but they could not refrain from repeating that she was a mother of five. A press corps that barely seemed to care that Joe Biden voted in favor of the Iraq War, only to oppose it later, became absorbed with the question as to whether Palin tried to ban books from the local library. (She didn't.)

Alas, Palin was not without baggage. She couldn't pass an interview with Katie Couric. She alienated swing voters by referring to rural states as the "real America."

Some of her baggage was surreal. As Palin noted Friday, political enemies used state ethics laws to raid her family's assets. "Every one -- all of the 15 ethics complaints have been dismissed," said Palin. According to the Associated Press, all but two of the 15 complaints "have been dismissed with no findings of wrongdoing."

According to the Anchorage Daily News, Alaskan taxpayers have spent nearly $300,000 investigating those apparently baseless complaints. Palin's personal legal bills exceeded $500,000, while, as Palin noted Friday, it doesn't cost her political foes a dime to file complaints "so they're not going to stop draining public resources." There also has been no cost for smearing Palin -- a hobby that has become so reckless that the FBI announced Monday that Palin is not under investigation on corruption charges.

If Palin simply had announced Friday that she was done with politics because she didn't want to bankrupt her family defending against baseless charges, you could applaud. But in leaving the door open for a run-up, Palin blew that.

Instead, the rambling remarks served to reinforce the suspicion that Palin was not up to the No. 2 slot. She's stuck in the victim gear. On the heels of her orgy of indignation over David Letterman's jokes, there's too much "poor me." Palin's attorney told CNN Monday that Palin deliberately chose to resign on July 3 as a "declaration of independence from politics as usual." You would never guess Palin campaigned for the office that she now finds so confining. "If I've learned one thing," Palin said Friday, "life is about choices." Good, because in cleaving to the victim role, Palin chose her path. Americans don't elect victims to the White House. E-mail Debra J. Saunders at dsaunders@sfchronicle.com. To find out more about Debra J. Saunders, and read features by other Creators Syndicate writers and cartoonists, visit the Creators Syndicate Web page at www.creators.com. COPYRIGHT 2009 CREATORS SYNDICATE, INC.