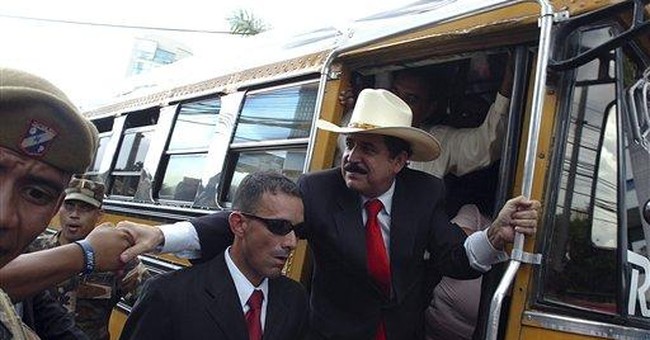 This is not a joke. Monday, the U.S. Supreme Court issued a 6-3 decision that required an Oregon public school district to pay a $5,200 monthly tuition (plus fees) for a private boarding school for a high-school senior whose psychologist had diagnosed him with ADHD, depression, math disorder and cannabis abuse.

Also not a joke: The Obama administration had urged the big bench to so rule. Thus the Individuals with Disabilities Education Act (IDEA), which mandates that all "children with disabilities" have the right to a "free appropriate public education," is turning into a cash cow for disability lawyers and private schools. According to an amicus brief filed by Obama's solicitor general, Elena Kagan, Oregon's Forest Grove School District had tested the student -- known as T.A. -- in 2001, but determined that he had no learning disabilities; specialists did not test for Attention Deficit Hyperactivity Disorder (ADHD), although they suspected he had it. Parents and school officials agreed to take a "wait and see" approach.

As he continued to have trouble in public school, T.A.'s mother e-mailed school officials that summer suggesting "there must be some method of teaching more appropriate for him."

In 2002, T.A. started using marijuana. In March 2003, Kagan wrote, T.A.'s parents sent the boy -- then a junior -- to a psychologist who diagnosed him with "ADHD, depression, math disorder, and cannabis abuse" and recommended that he be admitted to a residential program. The parents pulled T.A. from school, sent him to a three-week wilderness program, and then to the Mount Bachelor Academy, which specializes in students with "learning disabilities, substance abuse, and behavioral problems." The parents requested an independent hearing in April 2003 to get taxpayers to pay their son's tuition, as per the Individuals with Disabilities Education Act as the school district again determined that T.A.'s disabilities did not merit special education. But in January 2004, a hearing officer found that T.A. had ADHD and Mount Bachelor was appropriate for him.

A district court found against the parents. The Ninth Circuit Court of Appeals reversed the district court. Monday, the Supreme Court ruled that taxpayers should foot the bill for T.A.'s private boarding school.

At issue was a 1997 revision of the IDEA. Dissenting Justice David Souter argued the revision banned subsidizing parents' decision to send their kids to private school without getting approval from the district. The majority ruling, written by Justice John Paul Stevens and joined by conservative and liberal justices, argued that the revision did not change the law.

"The aggregate burden of this kind of policy is a tiny, tiny fraction of aggregate spending," said Greene.

On the other hand, the court arguably engages in policy-making when it tells districts how they must spend valuable education dollars.

Walter Olson of overlawyered.com nailed the problem with the majority ruling when he opined in an e-mail, "The impulse to get a better shake for one's kid is universal, but it's disproportionately wealthy and clever parents, with their hired lawyers and experts, who succeed in using these rules to obtain a private school education at public expense. In this case, the question was whether parents should at least try the public schools' proffer of special-ed services before declaring them inadequate, which doesn't seem to me to be too much to ask."

And what a test case. You could understand the court's order for tuition payments for private school for a severely disabled child -- but not a teenager who had managed to graduate without any special education from kindergarten to the 11th grade, when he developed a marijuana problem.

Sadly, many parents face a similar dilemma. But only parents with the resources to game experts (who will diagnose a disability) and lawyers stand to win full boarding school tuition.

Noting that Souter's dissent was joined by conservative Justices Antonin Scalia and Clarence Thomas, Olson noted, "I'm still trying to figure out why being progressive on this issue means siding with the private schools and affluent parents, while the conservative justices are the ones to defend the public school ideal of universal service."

It's one of those nice people things. The government has expanded the notion of disability to the point of absurdity. But nice people refuse to look at the impending drain on public school budgets, or how one child's boarding school tuition can mean that much less funding for all the other students' educational needs.