Cutting Off Your News To Spite Your Face 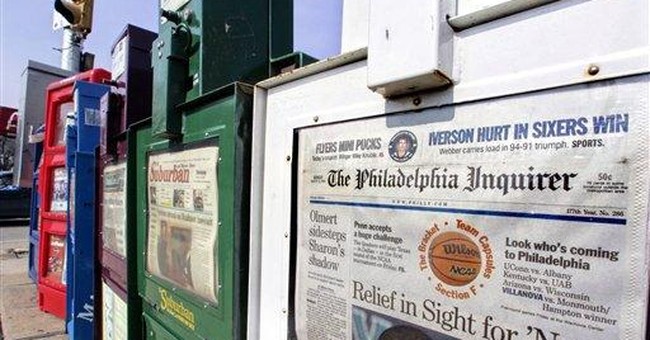 A couple of years ago, when speaking to a local group, I mentioned that The Chronicle was losing money. A couple in the back of the room rudely applauded. How thrilled those two must have felt when -- if -- they learned of San Francisco Chronicle Publisher Frank Vega's announcement Tuesday that the Hearst Corp. will implement "significant" workforce cuts. If the cuts don't pay off, then the Hearst Corp. will "offer the newspaper for sale or close it altogether."

Bloggers and e-mailers are crowing. If The Chronicle is shuttered, they'll be dancing a jig. Many conservatives feel a warm glow at the possible demise of an institution that they believe to be failing because of liberal bias. On the far left, that same glow will satisfy those who think newspapers are not liberal enough.

As for those who only read their news online, here's a news flash: News stories do not sprout up like Jack's beanstalk on the Internet. To produce news, you need professionals who understand the standards needed to research, report and write on what happened. If newspapers die, reliable information dries up.

Reduced ad revenue and falling newspaper circulation mean that there will be fewer people to cover the same number of stories. In the middle of an economic crisis and President Obama's federal spending bonanza, there will be fewer watchdogs to guard the shop.

So, to those of you who argue that the demise of liberal newspapers (The Chronicle in particular) is deserved, I offer a caveat: Be careful what you wish for.

Remember the ugly consequences of San Francisco's sanctuary city policy for juvenile offenders, who were sent abroad instead of to jail? Or Oakland Mayor Ron Dellums failure to tackle crime in Oaktown? Or reports on corporate bonuses for execs at bailed-out banks? Imagine that those things happened, but there was no journalist to investigate and report.

I wonder who will be around in five years to cover stories. Or what talk radio will talk about when hosts can't just siphon from carefully researched stories because they never were written.

Newspapers are the public's referees as to which information is credible. You can go online and read no end of fiction and smear about public figures. But when you read content in a newspaper, you consistently can rely on it.

As every conservative pundit knows, there is a special credibility that comes with being able to say, "as the New York Times reported," or "as the Washington Post reported." Even "as The Chronicle reported."

One of the great American pursuits in my lifetime has been to trash the local paper. It is a healthy, cathartic exercise -- and, at times, practiced in this column.

But at some point in recent years -- and publishers' decisions to post material online at no charge no doubt contributed -- this very American pastime devolved from spirited criticism to foolhardy prickliness. News consumers somehow moved from thinking their paper let them down to thinking that their paper was not worthy of them.

Despite all the solid stories, and all the reliable information, and all the articles that tell you something you did not know and all the opinion pieces that made you stop and think, a growing number of people have decided that it is more important for their news to be pure than it is for the public to be informed.

And I hear this from people who say they care about news. They look to the site-rich Internet for salvation, unaware that the decline of newspapers means that those shiny new websites are linking to fewer real news stories. What looks like more choice isn't. It's more doors leading to fewer rooms.

When a newspaper dies, you don't get a comprehensive periodical to fill the void. You get an informational vacant lot into which passersby can throw their junk.