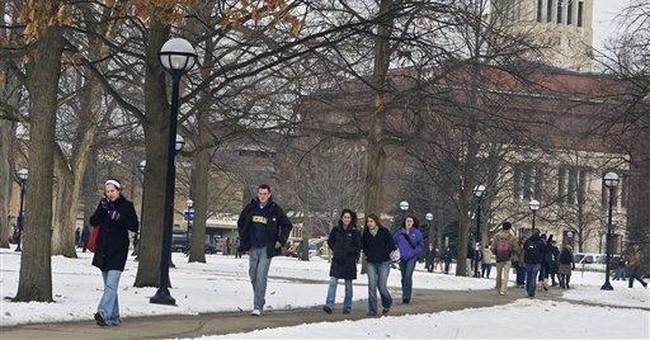 Back in October, after the Obama economic stimulus plan had grown from $60 billion to $175 billion and House Speaker Nancy Pelosi had doubled the amount she wanted to spend to $300 billion, I asked, "Do I hear $450 billion?"

Clearly Washington has moved beyond parody. President Obama's stimulus package started at $775 billion; the House enhanced the bill to the $819 billion mark; senators have been toying with a bill that flirts with $900 billion.

Tuesday, Obama told CNN that he thought the House was "remarkably disciplined" in putting together a stimulus package. Two weeks in office, and already Obama is talking as if he's been in Washington for too long.

Granted, Obama rightfully is concerned with containing the recession -- which he inherited. His first priority must be to staunch the loss of American jobs. Obama has little choice but to propose spending taxpayer money that Washington does not have.

Now the issue is how much.

Two schools of thought are at play. One side believes that the biggest danger is that Washington won't spend enough money to end the downward trend. Because this recession looks to last longer than your average nine-month slump and unemployment nationwide already is at 7.1 percent, only a huge swell can raise the boat.

They don't worry about how the accumulation of deficit spending will affect the economy in five or 10 years because, as economist Chad Stone of the nonpartisan but left-leaning Center on Budget and Policy Priorities explained, "We don't really have a choice. If we don't do the actions that produce the short-term run-up in debt now, then we just have the problem we're trying to avoid" -- more debt and misery.

If Washington acts to reduce federal debt after the economy stabilizes, Stone added, public debt will shrink to manageable levels.

The other philosophy was plainly stated by Sen. Tom Coburn, R-Okla., in the Wall Street Journal on Wednesday: "As a nation, we got into this mess by spending and investing money that didn't exist. We won't get out of it by doing more of the same." Aide John Hart noted that Coburn believes the stimulus bill "is about spending money we don't have on things we don't need." Sens. Susan Collins, R-Maine, and Ben Nelson, D-Neb., are talking about shaving as much as $200 billion from the Senate stimulus package.

"I'm not a big fan of the current stimulus bill," Bob Bixby of the fiscal watchdog group the Concord Coalition told me. "They should spend more time worrying about where to spend the TARP (Troubled Asset Relief Program) money and how to spend TARP II. I think that's much more important for the future of the economy than what's in the stimulus bill."

Some of the tax cuts and spending make sense, Bixby noted, as they're directed at "people who could use help, people who are out of work, or stuff that will be pretty quickly injected into the economy." Put together a plan with the right tax cuts and quick spending, and the total "might add up to $400 billion," he said.

As for the billions that go to "green" buildings, federal hiring and other programs -- that money should be allocated during normal appropriations.

First, Obama was right to argue with those who think that "tax cuts alone will solve all our problems." For one thing, some tax cuts won't stimulate the economy. "You lose the revenue, but you lose the revenue to people who don't spend it," Stone noted. For another, they add to the deficit. And worse, then you've got the problem of shutting them off.

The very fact that Obamadom hasn't even thought to push for more drilling tells you that maybe this stimulus package isn't about jobs. It's about politics.