The Sheriff and the Professor 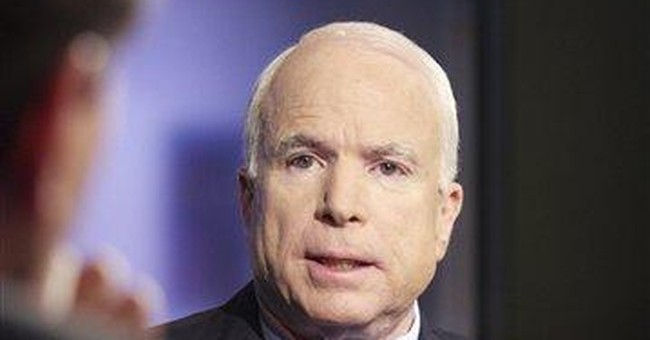 Before getting to Friday night's debate, let us look at what happened before the debate.

Yes, John McCain's suspension of his campaign earlier in the week and call for a delay of Friday's debate were campaign stunts. But his decision to go to Washington to prod political leaders to pass a sensible bailout measure, while political, showed America a candidate who will risk his electoral fortune to deliver the right policy.

McCain was in a corner. He clearly feared that if Congress did not approve a bailout measure, the economy would tank. Then, his bid for the White House would be doomed.

And while Senate Majority Leader Harry Reid derided McCain's appearance Friday, on Wednesday Reid declared a need for "the Republicans to start producing some votes for us. We need the Republican nominee for president to let us know where he stands and what we should do."

The alleged deal that had been cut before McCain landed in Washington Thursday did not exist. House Republicans had not signed on. Without them, Democrats would not sign on. On Friday, Reid falsely claimed there was a deal "and then guess who came into town."

And: "The insertion of presidential politics has not been helpful. It's been harmful." No lie, but it's Reid and company who appeared ready to scuttle any settlement lest McCain get the credit.

The campaign suspension did serve to add drama to a campaign season that has been provided a rush of roller-coaster moments -- making Friday's debate all that much more a high-stakes affair.

The consequences of this election are dire, but for pure theatre, this has been the most fun election to cover in my career. I pity young journalists covering this race because they'll have started with the best. They'll be talking about 2008 until they're as old as, well, John McCain. Or if they're lucky, McCain's 96-year-old mother, Roberta.

Who needs "Desperate Housewives?" Every week, this campaign has a cliffhanger.

On the day of the debate, Obama spokesman Bill Burton sent an e-mail to reporters that announced "debates are not a good format for Obama," who was expected to come across as too professorial. Campaigns do that sort of thing as they play to the chattering classes who are impressed not by the candidate who makes the better arguments, as much as the candidate who defies their often mistaken expectations.

In fact, for the most part, both candidates delivered strong performances with a presidential demeanor. Of course, I think McCain won.

What Obama did right: Obama was right to note that the $700 billion bailout will delay some of his spending proposals. He scores points with voters when he mentions the $10 billion-per-month price tag for the Iraq war when the Iraqi government enjoys a $79 billion surplus. Obama showed class when he commended McCain's opposition to the use of torture in the war on terror.

What Obama did wrong: George W. Bush is not running for re-election. The gratuitous Bush-bashing has gotten old -- and it makes Obama sound like a college student at a political rally. Maybe it works with the moveon.org crowd, but most voters are looking for a leader for the next four to eight years. And it takes no leadership to kick someone with an approval rate higher only than that of Congress.

Also, Afghanistan is not the "central front" in the war on terror. As McCain countered, "If we fail in Iraq, it encourages al-Qaida."

What McCain did right: McCain understands that "maybe to Sen. Obama" $18 billion in annual earmark spending is "not a lot of money," but earmarks are corrupting. McCain noted his opposition to earmarks had earned him the nickname of "the Sheriff."

Most important, McCain did not come across as bellicose, especially when he recalled his opposition to Ronald Reagan's push to keep U.S. troops in Lebanon in 1983. When McCain warned Obama about not brandishing a gun unless he is willing to pull the trigger -- in reference to getting too tough with Pakistan -- McCain showed himself to be the adult in the room.

What McCain did wrong: Jim Lehrer was practically begging McCain to look at Obama when he criticized Obama. "Say it directly to him," Lehrer chided him. But McCain would not, or could not, do so.

What they both did wrong: Neither candidate would articulate which of their pet proposals might have to be postponed if the $700 billion bailout passes. Then again, neither intended to be so blunt.

NYT Columnist's Op-Ed About Liz Cheney Shows How the Left Really Feels About Her...And It's Not Shocking
Matt Vespa

Guys, If Only Someone Made Ma'Khia Byrant a Sandwich, She Might Be Alive Right Now