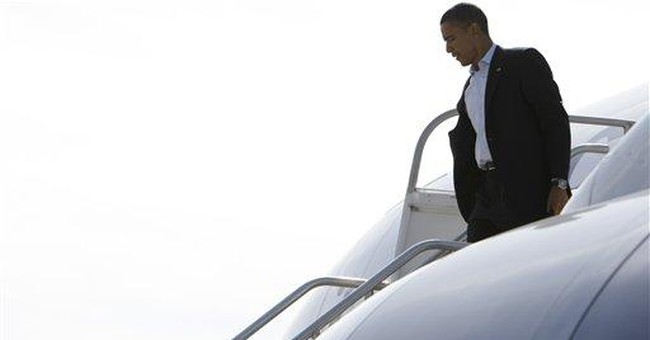 DENVER -- The goodie bag given to attendees of the Democratic National Convention includes maps, magnets and Dale Carnegie's Golden Book. The first principle for Carnegie's "How to Win Friends and Influence People" is: "Don't criticize, condemn or complain." No. 2: "Give honest, sincere appreciation."

Clearly Carnegie didn't write an opinion page column, but in that I think my original take on Democratic presidential candidate Barack Obama's choice of running mate was a tad harsh, I would like to address what was positive about his choice of Joe Biden.

My first take? I felt the same as when I watched the end of the last episode of "The Sopranos." Let down. The go-to-black ending may have been nuanced, but as far as I was concerned, the producers punted. They chose a non-ending because they couldn't decide on a strong ending.

Yes, Biden is considered a statesman with strong foreign-policy credentials. He also comes across as a very decent man. He has been an effective senator, who could work with Democrats and Republicans alike.

Politically, however, not choosing Hillary Rodham Clinton as his running mate seemed a gratuitous way of insulting Clinton's close-to 18 million voters. Worse, it must have felt like rubbing salt into the wound to Clinton and her supporters when Obama passed her over for a man who, months ago, was shooting for a third- or fourth-place finish in Iowa -- then dropped out after he came in fifth, having failed to garner 1 percent of the vote.

There are more than 1,500 delegates pledged to Clinton in this town -- and you know what they say about women scorned. So, if you have to pick the Iowa horse who couldn't win, place or show -- well, first, hide the ashtrays.

And it won't matter that Clinton ran a disorganized campaign, burned through $106 million before the first vote was cast and frittered away a solid lead. Clintonia will whisper that if the Dems lose the White House, then it will be because Obama didn't pick Clinton.

The upside of this gamble? If Obama wins, then he'll own the operation. He'll start with a clean slate.

One big problem with Biden: Like Hillary Clinton, Biden voted to authorize the use of U.S. military force in Iraq. Some liberals forgive Biden for his Iraq vote, noting that he has been highly critical of the Bush administration's handling of the war -- albeit with his quirky proposal to divide Iraq, Gaul-like, into three parts.

And like Obama, Biden said the surge could not work. Well, it has worked.

I think Clinton lost because she voted for the war. I think that Democratic primary voters chose not to forgive in 2008 a vote they forgave in 2004 when they nominated John Kerry. I remember looking out at delegates at the 2004 Democratic National Convention in Boston -- 86 percent of who, unlike me, opposed the war -- and thinking that if they wanted the party to be truly united, they should have nominated a candidate who did not support the war. As I wrote at the time, "They should have picked (Howard) Dean."

In 2004, Democrats thought they were being clever in nominating Kerry, whose vote rankled so many delegates. In 2008, they picked a clever candidate who opposed the war from the start.

Look beyond the convention. Even those voters who have strong misgiving about the war in Iraq nonetheless may not want a vice president who voted for a war, then walked away from that vote when it became politically unpopular.

Biden says that his old friend, John McCain, has changed his positions to win the GOP nomination. "I've been disappointed in my friend, John McCain, who gave in to the right wing of his party and yielded to the very 'Swift Boat' politics that he once so deplored. Folks -- campaigns for presidents are a test of character and leadership," Biden said.

Leadership? When the polls showed his support of the Iraq War could kill his chances in 2008, McCain stood firm. He even called for more troops in Iraq.