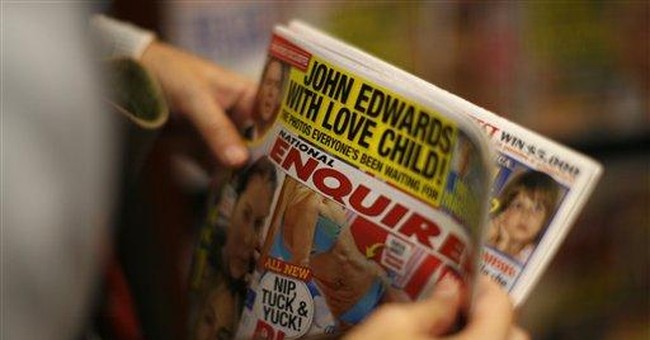 The pretty-boy candidate always was the biggest phony at any Democratic debate. He was the $400-haircut poster boy for poverty. The 28,000-square-foot mansion owner who preached about global warming. The candidate who demanded that other Democrats swear off accepting contributions from Fox News baron Rupert Murdoch, after he pocketed a $500,000 advance -- with an extra $300,000 for expenses -- from Murdoch's HarperCollins. The man who ran as the doting husband of the cancer-battling Elizabeth Edwards while he was boffing an overpaid campaign aide.

If I were a Democrat, I would be spittin' mad. If Edwards had won his party's nomination for president, news of the affair most surely would have gotten out and the Democratic Party's chances of winning the White House would have evaporated instantly, as would-be supporters would have realized they can't believe a word the man says.

Edwards had asserted that National Enquirer reports of an affair with Rielle Hunter were "completely untrue." In admitting to the affair -- but not the lovechild, if you care to believe him -- Edwards explained in a statement that he relied on inaccuracies in the story to deny it, "But being 99 percent honest is no longer enough."

99 percent honest? Even when he is coming clean, he's a snake.

And a cad. If he'd won the Democratic nomination, Edwards would have damaged his party. Having lost, he could only be a drag on his wife's reputation, and he was. By announcing that he told Elizabeth about the affair in 2006, Edwards has allowed his better half to share in his big lie.

Now neither Edwards is credible.

Edwards said in a statement, "If you want to beat me up -- feel free. You cannot beat me up any more than I have already beaten up myself." I doubt that.

See how Edwards beat himself up during Friday's interview with ABC's Bob Woodruff. He tried the everybody-does-it approach: "Well, what I was thinking was this was something that was personal to my own family. My family knew everything about it. Everything. And on top of that, if you look back, Bob, I mean, I've seen people like, for example, John McCain talk about the mistakes that he's made in his past, with respect to his first marriage and left it, I think, basically at that. I mean, I'm not the first person to do this, but I don't want to -- I don't want to talk about that."

Yes, McCain was married when he met his current wife, Cindy, in 1979. The former prisoner of war did pay a political price for his behavior. Last month, the Los Angeles Times reported how the breakup of McCain's first marriage "fractured" his relationship with President Ronald Reagan and his wife, Nancy.

That the L.A. Times would devote a story to a political rift that occurred almost 30 years ago only feeds the perception that there is a double standard in newspapers. Of course, the best exhibit of the double standard is the bogus New York Times piece in February that alleged, but failed to prove, that McCain had an affair with a lobbyist.

I believe The Chronicle was right not to report on rumored Edwards' story until his confession. Better to be late and right than early and wrong.

That said, only a double standard explains why the New York Times and other biggies failed to jump on reports that National Enquirer staff had caught Edwards after he met with Hunter at the Beverly Hilton during the wee hours of July 21. Sure, they first had to verify the story, as ABC News was working to do, but Times editors couldn't be bothered.

On the one hand, Democrats should feel good about having dodged the Edwards recklessness bullet. But the story has only served to feed the rage of Hillary Rodham Clinton supporters, some of who believe that without Edwards in the Democratic primary race, their gal might have won.

Or as former Clinton spokesman, Howard Wolfson, told ABC news: Without Edwards, "I believe we would have won Iowa, and Clinton today would therefore have been the nominee."

If only the cad had stayed home.