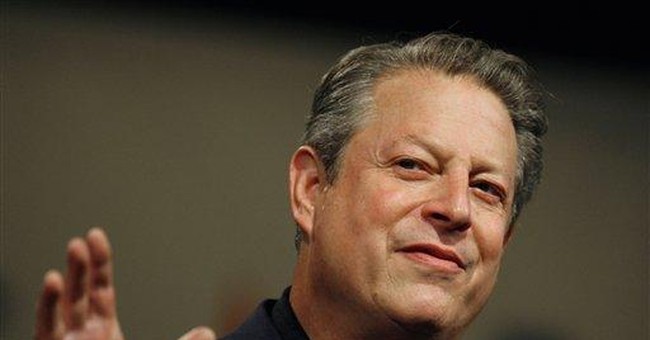 In a Washington speech last week, former Vice President Al Gore argued that America can produce "affordable" 100 percent carbon-free electricity within 10 years. My question: Why not five years? As long as Gore sees virtue in proposing completely unrealistic solutions, as in moving America from getting 3 percent to all of its electricity from renewable energy sources in a mere decade, wouldn't five years be twice as good?

And it matters that Gore is all wet because the longer Washington pols live in energy la-la land, the loonier and more costly America's energy situation becomes.

For decades, Democrats have dominated the debate, as they argued that Americans could become more energy independent, not by increasing oil production, but by focusing on producing more renewable energy. The result, as energy entrepreneur T. Boone Pickens so aptly points out, is a huge spike in the percentage of foreign oil America imports, from 24 percent in 1970 to almost 70 percent today.

Oh, yeah, and while we weren't expanding drilling to the Arctic National Wildlife Refuge or off the California and Florida coasts, Americans continued to buy gas-guzzling cars as they waited for miracle cars to magically appear. Until one day, prices at the pump jumped the $4 per gallon mark.

Let me be clear: A smart energy policy must include incentives to increase the development and production of wind, solar and geothermal power, as well as other alternative sources of energy. The serious advocate for carbon-free, affordable power would include nuclear power, which provides 20 percent of America's electricity, and cleanly, into the mix.

But because America's need for fossil fuels will not go away in the next 10 or 20 or 30 years, it makes sense to drill domestically for oil to ease the pain to the red-white-and-blue pocket book. Also, more American oil production means sending fewer petro-dollars abroad.

As for Plan Gore, while the goal will be reached some day, it won't be on his timetable. Today, industry can't keep up with the present demand for wind turbines. The electricity grid needs improvements to carry renewable energy where it is needed. And the infrastructure changes necessary to retool power plants don't happen overnight.

Most important: In the real world, American utilities are not going to dismantle the coal and natural-gas power plants that provide more than 70 percent of America's electricity. It simply is not going to happen because consumers won't want to pay for it.

Gore estimates that his plan can be implemented at a cost of between $1.5 trillion and $3 trillion. That does not jibe with Pickens' estimate that it would cost $1 trillion to generate 20 percent of America's power with wind power with an extra $200 billion to update the electric grid. U.S. News "Capital Commerce" columnist James Pethokoukis extrapolated the numbers and figured $5 trillion for Plan Gore is more like it: "That would be like creating another Japan. Or fighting World War II all over again."

Did Al Gore warn his audience that they would have to pay the price tag for a world war to pay for his plan? No. He started off his speech bemoaning rising electricity rates and high gas prices as if he had the answer. Toward the end of his speech, Gore explained how under Plan Gore there would be so much cheap carbon-free electricity that there will be extra power into which people will be able to plug their reconfigured cars. Voila, cooed Gore, "the equivalent of $1 per gallon gasoline."

This is important: If self-styled reformers cannot level with the American people as to the cost of their plans, nothing will change. If there is one thing America's energy situation should make clear, it's that when Washington doesn't ask people to sacrifice, they don't.