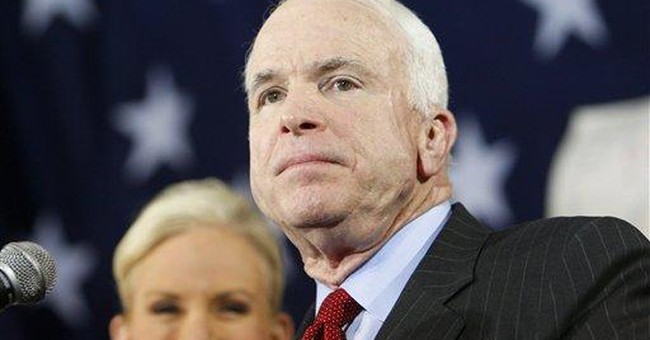 Rush Limbaugh launches daily rants against John McCain. Fellow conservative radio talk-show host Laura Ingraham dismissed the Arizona senator on Wednesday as the Democrats favorite Republican. Hugh Hewitt blogged on Townhall.com that a vote for McCain is a vote for an old warrior way past his prime and the prospect of three debates against Barack Obama in which the age and energy gap goes unremarked upon while devastatingly obvious.

A washed-up old warrior? McCain deserves more respect for risking his life in Vietnam and enduring five years in a Vietnamese POW camp, as he refused his captors offer to free him. Of course, engaged Republicans have a right to criticize McCain on the issues -- but they go too far, and they are sabotaging their partys chances in November.

According to the RealClearPolitics.com polling average, McCain is the nationwide front-runner in the Republican primary. Why bloody a man who could be your partys nominee, unless you see ideological purity as more important than winning in 2008?

Sure, Mac-bashers admit, hes good on Iraq and the war on terrorism, but look at his apostasies. McCain co-authored a campaign-finance reform bill that enraged far-right (and far-left) advocacy groups. He co-authored global-warming legislation with then-Democratic Sen. Joe Lieberman. McCain infuriated the GOP base last year when he championed an immigration bill that would have set up a path to citizenship for illegal immigrants. The bill tanked, and deservedly so, but not before McCain gratuitously insulted bill critics. I have to think that what really sticks in the Limbaugh/Ingraham/Hewitt collective craw is the fact that McCain has been a darling of the media. And some Democrats and independents say they could vote for him.

Like those are bad things in an election year.

Sen. Tom Coburn, R-Okla., returned my call from South Carolina after he had endorsed McCain on Wednesday. When I noted that some Republicans say that McCain is not really a conservative, Coburn answered, What Ive seen in the three years that Ive been in the Senate would dispute that.

Before the big 2006 GOP election losses, Coburn and McCain were fierce opponents of Republican pork-barrel spending. Because they are good small-government conservatives, both were willing to buck spend-happy party leaders. Coburn strongly disagreed with McCain on the immigration bill, but he remains impressed with McCains willingness to lose for himself so America gains.

Is McCain the most conservative conservative? No, thats me, Coburn remarked. But can I endorse John McCain and feel comfortable for the future of my grandkids? You bet. Note: Its also important for Coburn that he thinks McCain can win in November.

As for the McCain-baiters, if they feel the need to bash McCain with no restraints, it must be because they fear mightily that voters may grant him the nomination.

Their McCain pile-on would not be so egregious if only the White House -- and the perks of politics -- were at stake. With 165,000 troops serving in Iraq and 26,000 serving in Afghanistan, Republican voters must guard more than their party purity. They have to vote -- and at times hold their tongues -- with an eye on what is most important: Iraq.

As public support for the war has eroded, it has been disheartening to watch Democrats, who once supported the war, drop the ball on Iraq. Now, to watch Republicans bloody McCain, when they should be concentrating on keeping an anti-war Democrat from becoming commander in chief -- well, it makes me wonder how much they want to win.