David Williams
|
Posted: May 27, 2020 8:40 AM
Share   Tweet
The opinions expressed by columnists are their own and do not necessarily represent the views of Townhall.com. 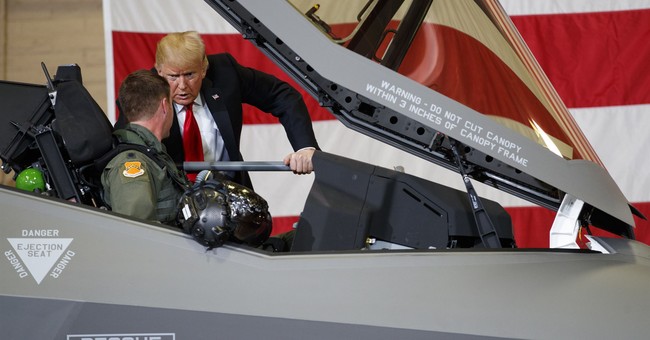 As the federal government spends trillions of dollars to fight the Coronavirus, it is more important than ever for Congress and the Trump administration to adjust spending priorities. In particular, lawmakers should be taking a long, hard look at the Pentagon’s costly, problem-plagued F-35 Joint Strike Fighter Program. At this difficult time, every dollar spent on bank-breaking boondoggles is a dollar withheld from struggling American households. Congress ought to axe the $1.6 trillion F-35 program and return these dollars to the people who need them the most right now.

With the national debt recently topping $25 trillion, the current path of government spending is perilous and unprecedented. To make matters worse, CNN reports that the most recent bill passed by House Democrats to combat pandemic problems would add another $3 trillion in new spending and contains many items that have nothing to do with the coronavirus (e.g. a $25 billion U.S. Postal Service bailout). Conservatives in Congress are expected to put the brakes on any new spending proposal until they can assess the effectiveness of the last $2 trillion in aid programs contained in the CARES Act.

Some in the White House are worried about the trajectory of spending. The Washington Post reported on May 11, 2020, “senior Trump administration officials are growing increasingly wary of the massive federal spending to combat the economic downturn and are considering ways to limit the impact of future stimulus efforts on the national debt, according to six administration officials and four external advisers familiar with the matter.” One approach is to look at expensive existing programs to find some savings, and a natural place to start is the bloated, debt-fueled Department of Defense.

For example, the F-35 Joint Strike Fighter Program is a paragon of waste and inefficiency yet has managed to survive serious scrutiny. The program was started in 2001 with the goal of creating a new aircraft with enhanced capabilities and loaded with novel technology. The problem occurred when government officials quietly realized that the initial contractor overpromised results and threw costs by the wayside. A May 2020 Government Accountability Office (GAO) report to Congress mapped out some of these problems, finding, “from 2018 to 2019, the total cost estimate of the F-35 acquisition program increased by $22 billion, from $406 billion to over $428 billion.” The overall cost of the program is far larger and the GAO reported that, in addition, “the program estimates that the sustainment costs to operate and maintain the F-35 fleet for its planned 66-year life cycle are $1.2 trillion, bringing the total cost of the F-35 program to over $1.6 trillion.”  At a time when Americans are hurting and massive resources are being marshaled for small businesses and unemployed Americans, Congress simply cannot afford this slow-motion disaster.

The GAO report speaks to some real problems with the program that require prompt attention. Astoundingly, the “F-35 program test officials had identified over 3,200 deficiencies.”  Those include “specific instances where the weapon system either does not meet requirements or where the safety, suitability, or effectiveness of the weapon system could be affected.”  Bloomberg reported in March on another GAO report that found $17 billion wasted on a “system used since 2009 to monitor F-35 fighter jets for repairs, parts replacement and general maintenance” that ended up being “rife with flaws, sometimes forcing personnel to spend hours entering data by hand, according to congressional auditors.” That $17 billion could and should have been given back to hard-working taxpayers struggling to get by.

Lawmakers should end the F-35 program before more taxpayer dollars fly off without a trace. Now is the time to help Americans down on their luck, not bureaucrats without any pluck.

David Williams is the President of the Taxpayers Protection Alliance.