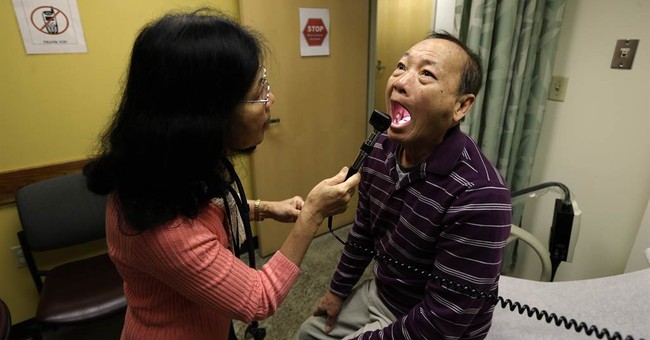 The Obamacare train is clearly in motion, and it has had quite a bit of trouble leaving the station. It’s important that we not let the technical issues with the rollout distract from the far worse consequences of the law that loom on the horizon, including a movement to re-define what constitutes a “doctor.” This change could harm patients and taxpayers.

Instead of at the national level, many healthcare fights will play out in state legislatures across the country. One of these battles is where the scope of procedures medical practitioners can perform are determined. Over the past year, legislation that would allow healthcare practitioners that are not medical doctors to perform increasingly complex procedures has been proposed in both red and blue states – Tennessee, Louisiana and California in particular. In each of these states, Democrat legislators have tried to give what are often termed “allied health professionals” – like optometrists, pharmacists, and nurse practitioners – the ability to perform procedures reserved for highly trained medical doctors.

The quest by non-M.D. health professionals to expand their scope – and with it, their paychecks – is not a new development by any means. Optometrist and nurse practitioner lobbies have been working to push the issue for years, culminating in a victory for optometrists in Kentucky in 2011, achieved largely through backroom legislative dealing.

The passage and implementation of the Affordable Care Act, with its anticipated spike in demand for healthcare services, has merely provided a fresh hook for these professional lobbies to frame their push for more power in the context of “patient access.”

But access to what, exactly? In Tennessee, Kentucky, and California, optometrists, who are not medical doctors, fought for the ability to provide “primary care” and even perform surgeries on the eye. At present, most of these complex procedures are reserved for ophthalmologists, medical doctors who attended medical school and completed a residency and medical internship – more than 17,000 hours in training in total, compared with less than 3,000 hours for optometrists.

Simultaneous with these legislative battles, allied health professionals are waging a public relations campaign aimed at glossing over the vast differences between them and medical doctors. For example, Tennessee optometrists changed their association’s name from the Tennessee Optometric Association to the Tennessee Association of Optometric Physicians.

Thus far, legislators in California, Louisiana and Tennessee weren’t fooled and ultimately rejected proposals that would compromise medical safety standards. But in each case the door was left open for future attempts, and now that the new healthcare law is actually being implemented, state houses across the country should expect a renewed push.

It stands to reason that by forcing individuals into the healthcare system without ensuring there is an adequate pipeline to treat them will create some bottlenecks. As these bottlenecks build, it will only add fodder for these specialties to push for expanded scope.

One of the proponents’ central arguments is that increasing the ability of non-M.D. practitioners to perform a broader range of procedures would free up access to care – particularly in rural areas – and reduce the bottleneck that may be created by thousands of new entrants into the healthcare system. The problem? No patient, whether rural, newly insured, or otherwise, deserves care from practitioners without sufficient training for the procedures they are performing. Substandard healthcare is not an acceptable solution to the problems created by Obamacare.

Additionally, these allied health professionals argue that their treatment will also reduce healthcare costs, since nurses, optometrists and pharmacists often bill at lower rates. This may be true at the onset, but what is the price of substandard care? More doctor and hospital visits that clog the system even further and add unnecessary costs.

States need to resist falling for quick fixes when confronting the challenges faced by Obamacare. The widespread unpopularity of the law makes it likely that significant changes will be made at the federal level, and in the meantime many solutions have been proposed to address the access issue. Legislators should keep their hands off of healthcare and not change the definition of who constitutes a “doctor.”