The Preacher Who Walked With Presidents

David Stokes
|
Posted: Feb 21, 2018 12:54 PM
Share   Tweet
The opinions expressed by columnists are their own and do not necessarily represent the views of Townhall.com. 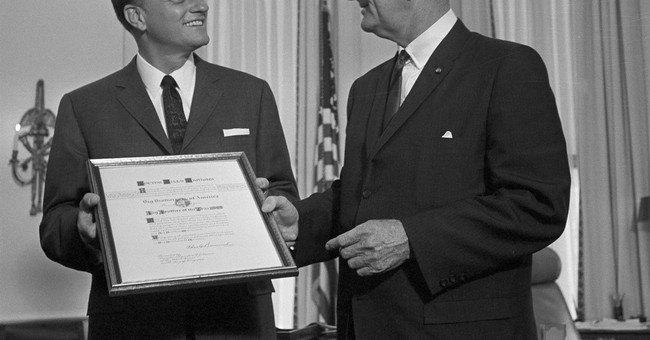 Fifty years ago, in the wake of the hard-fought 1968 presidential election, the nation faced what many assumed would be a turbulent transition. But it did not turn out that way. Whatever happened later, the country moved from what had been one of the most divisive campaigns in our history, to a comparatively calm and remarkably orderly (considering the times) transfer of power. This was due, in large part, to the combined and concerted efforts of two savvy politicians and a preacher.

His name is Billy Graham, and he was born just four days before the guns fell silent ending what was then optimistically called the War to End All Wars. He passed away Wednesday morning at the age of 99.

In their book, The Preacher and the Presidents: Billy Graham in the White House, Nancy Gibbs and Michael Duffy chronicled the evangelist’s journey from White House visitor, to presidential confidant. Beginning with a somewhat embarrassing Oval Office meeting with Harry Truman – one that brought out the president’s profane side – he went on to learn the ropes during the Eisenhower and Kennedy years. By the time LBJ was in charge, Billy was a regular over-night guest at 1600 Pennsylvania Avenue.

Presidents loved to pick his brain. Eisenhower once asked him, “How do I know if I’ll go to heaven?” Jack Kennedy inquired about the second coming of Christ and wondered, “Why doesn’t my church teach it.” When Graham indicated that the doctrine was written in Roman Catholic creeds, JFK complained, “They don’t tell us much about it, I’d like to know what you think.” Johnson wanted to know if he would see his parents in heaven.

Though Billy Graham was a friend of the president-elect fifty years ago, the man who was still president did not seem to mind sharing the preacher. In fact, Lyndon Johnson invited Billy Graham to spend his last weekend in the White House with him January 18-19, 1969. One evening he watched a movie with LBJ and his family, The Shoes of the Fisherman, starring Anthony Quinn. When the president dozed off mid-film, Billy quietly went to the projectionist and asked him to keep the reels around, thinking Nixon would like it.

The president and the evangelist went to church together on Sunday, January 19th. The next day, during the inauguration of the 37th president, Billy Graham delivered the invocation. Then, following Nixon’s address – as the Johnsons quietly left the stage – the now ex-president’s daughters kissed the preacher. And Billy went back to the White House and spent the night with the Nixon family on January 20th.

The following Sunday, President Nixon began a custom of holding worship services in the White House. The first clergyman to officiate was, of course, Billy Graham.

It seems to me that Billy Graham found the balance. He managed to stay faithful to the simple gospel message, even when surrounded by the seductive trappings of power. The man of God found a way to connect with politicians in a way that earned their respect and opened doors for personal ministry.

Billy Graham was a faithful servant of God and citizen of America. In a very Kipling-esque sense, he walked with presidents, but never lost his “common touch.”