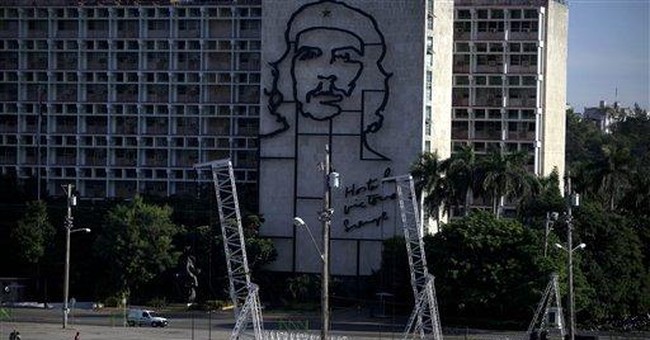 Cue the doves in places like Prague, Warsaw, Moscow, Tehran, and Caracas. Peace is at hand. Peace in our time. Central Europe, the region that has provided the kindling for so many of the conflicts that have burst forth into full flame for nearly 100 years, is once again safe from its protectors. Pardon me while I pause to fan myself as I tear up. We have been once more delivered – we, as in all humanity, that is – delivered from the mean old policies of Dubya, and company. The good guys know better. Trust them.

Pardon the preacher in me (it is, in fact, my day job), but I can’t help but think of a scripture, one that has an ominous ring to it, in light of the recent decision by the Obama administration to back away from the previously proposed and planned nuclear missile shield in and around the Czech Republic and Poland.

“For when they shall say, Peace and safety; then sudden destruction cometh upon them…” I Thessalonians 5:3 (KJV)

One might call what we are seeing these days Yogi Berra-like foreign policy, as in “It’s déjà vu all over again.” We are underestimating Iran and appeasing Russia – all in the same fell swoop. Remarkable!

Okay, one more time. The year is 1938, and there are some very bad people who are being underestimated by some very, supposedly bright, but actually just incredibly naïve people. Though it happened more than 70 years ago it is still relevant. Its relevance is reinforced each and every time those who play with matches and kindling ignore the obvious-to-anyone-with-a-brain lessons. The story will cease to be relevant when the world finally figures it out. My advice is: Don’t hold your breath.

In fact, the long ago, yet up-to-date, fiasco is known now simply by the city-name-as-a-metaphor, Munich - apologies to that wonderful Bavarian city, a place unfortunate enough to have been an international and diplomatic crime scene. David Faber, the grandson of former British Prime Minister Harold MacMillan, and a former Conservative Member of Parliament (1992-2001), has written a fresh, factual, engaging, definitive, and, well, haunting account of what happened back then.

The book is called, Munich, 1938: Appeasement and World War II.

Appeasement was never really a “bad” word until it became forever identified with the foreign policy failures in Great Britain under the premiership of Neville Chamberlain. The word itself simply means to pacify or soothe. Most of us understand that there is a measure of this required for peaceful and civilized living and discourse.

But when appeasement met Adolf Hitler, it was manipulated, twisted, scorned, and ultimately dismissed. To put it in the words of Sean Connery playing a character in the 1987 movie The Untouchables, Mr. Chamberlain had brought a knife to a gunfight in Munich. A knife crafted out of a very thin sheet of paper. But our leaders are doing even better – they are throwing the knives away.

The appeasement of the 1930s, gave way to the resolve of the 1940s, but it was a lesson learned the hard way. Is history repeating itself?

I think a better case can be made that history may be reversing itself. Back then, our nation moved from isolation and denial toward eventual engagement. It was a progression that was somewhat understandable – after all, who wants war? Now however, it seems that some are determined to move us from resolution and vigilance – the qualities that have, indeed, kept us safe for the past eight years – toward appeasement.

Think of it this way: It’s one thing to cut Neville Chamberlain some slack for what he did back then with his deliberate policy of appeasement. Many people then had been seduced into a sense of sleepy underestimation of Hitler and his henchmen. After all, even former Prime Minister David Lloyd George had visited the dictator at Berchtesgaden a couple of years earlier and was clearly smitten. He returned home, calling his Nazi host “the greatest living German” and “the George Washington of Germany.” He even had a device installed at his home in Surrey – one that would lower a large picture window into the ground, creating “the feel of a covered terrace.” It was something that had captivated him at the Eagle’s Nest.

Then there was the other Nevile, now largely forgotten in the appeasement story, Nevile Henderson (he spelled his name with only one “L,” unlike the PM, the only apparent difference between the two men). He was the British Ambassador to Germany at the time and was fond of saying things about the Nazis like:

“Far too many people have an entirely erroneous conception of what the National Socialist regime really stands for. Otherwise they would lay less stress on Nazi dictatorship and much more emphasis on the great social experiment which was being tried out in Germany.”

These days, you could sub out the words “National Socialist” and “Nazi” and “Germany” and insert the names of guys like Putin, Castro, Chavez, et al – and it might sound eerily familiar to some current diplomatic-speak coming out of Washington, or the U.N. But I digress.

Oh, and we must not forget good old Edward Frederick Lindley Wood, better known as the Earl of Halifax, or Lord Halifax. He was Chamberlain’s Foreign Secretary. He had been to Germany, as well – as a hunting guest of Hermann Göring. All of this is chronicled fascinatingly in Faber’s book.

Of course, Winston Churchill – a voice in the wilderness of those days – said, famously: “An appeaser is one who feeds a crocodile - hoping it will eat him last.”

But again, this was new territory for all of them. In fairness, they had no clue at first that the rules of geopolitics and diplomacy were quickly changing, such a revolution being driven by a mad man. They all saw the light, eventually. And even Winston Churchill, who had been so solitarily tough on his Conservative party brothers over the whole appeasement issue, understood – graciously so – that Chamberlain and company were sincere in what they tried. Speaking at his Downing Street predecessor’s funeral in November of 1940, and as events by then had cruelly proved Neville Chamberlain so sadly wrong, Churchill waxed philosophical:

“It fell to Neville Chamberlain in one of the supreme crises of the world to be contradicted by events, to be disappointed in his hopes, and to be deceived and cheated by a wicked man. But what were these hopes in which he was disappointed? What were these wishes in which he was frustrated? What was that faith that was abused? They were surely among the most noble and benevolent instincts of the human heart--the love of peace, the toil for peace, the strife for peace, the pursuit of peace, even at great peril, and certainly to the utter disdain of popularity or clamour. Whatever else history may or may not say about these terrible, tremendous years, we can be sure that Neville Chamberlain acted with perfect sincerity according to his lights and strove to the utmost of his capacity and authority, which were powerful, to save the world from the awful, devastating struggle in which we are now engaged. This alone will stand him in good stead as far as what is called the verdict of history is concerned.”

Now, however, things are both the same and different. We are certainly bearing witness to the forming of threatening storm clouds. And it’s all being largely ignored or minimized by those who should know better. History, yet to be written, will not, however, cut current leaders - who are apparently convinced that today’s threats aren’t substantive or substantial - any such Churchillian slack.

Why? Because we ought to know better. Our experience, sense of the past, not to mention just plain old common sense should scream to this moment: “Crocodiles eat doves!”