Would You Turn Your Cheek to a Terrorist? 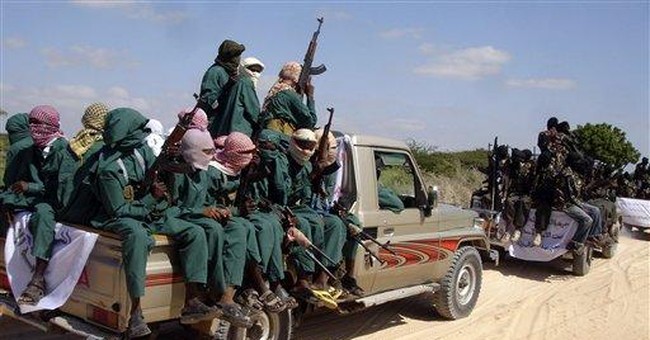 During a recent interview with CNN’s Anderson Cooper, President Obama indicated that his administration is in fact moving away from the of the phrase “war on terror.”  Recognizing that “we have a battle or a war against some terrorist organizations,” he sees those groups as not “representative of a broader Arab community.”  Presumably, his use of the word “some” in reference to terrorist organizations does not mean he thinks other terrorist organizations are less dangerous, but is just a case of awkward phrasing.

Then again, he did say that “words matter.”

The president told Cooper that “words matter in this situation because one of the ways we’re going to win this struggle is through the battle of hearts and minds.”  My question is this: Are we now trying to win over the hearts and minds of terrorists?

Certainly there are issues that need to be debated in the marketplace of ideas.  There are a vast number of Muslims in the world who are not radicalized. And we certainly want to use reason, intelligent argument, and appeals to justice, mercy, and compassion as part of a concerted effort to prevent some from crossing over to the dark side.

But for those who are already indoctrinated, immersed, and otherwise in bondage to a fanatical Islamist ideology, it is foolhardy to think that any words from anyone in the west will disabuse them of their destructive notions and deadly ambitions.

Frankly, I – along with so many others – have never been a fan of the whole “war on terror” nomenclature.  It smacked of vagueness and misdirection, directing focus on one particular methodology in a larger conflict.  I have always thought we should be demonizing an ideology – one very worthy of such a characterization.

We should have, all along, been saying that we are in a war against a vile, loathsome, and pernicious ideology – Islamism.  It is only a combination of a misguided sense of political correctness blended with a cowering fear of inciting dangerous people that has kept us from telling it like it is.

At a time when this country needs to be vigilant and focused on a very real enemy – one determined to end our way of life as we know it – Mr. Obama has blurred the issue.  He is moving us away from a war mindset to something more surgical and limited.  This should be no surprise to observant Americans.  After all, he didn’t really have much to say on the issue during his campaign.

To minimize or marginalize danger is to ignore it.  And to ignore danger is how to quickly become blind and vulnerable.

Make no mistake, anything less than a clear commitment, born of national self-interest and concern for international justice and stability, to destroy Islamism in this generation the way we defeated Nazism nearly 65 years ago, is, in fact, the epitome of naivety. Reaching out to moderate Muslims has its place, but not without a clear challenge to them to be on the front lines of resistance to Islamism.

Islamism is not synonymous with Islam, per se – but unless Muslims rise up and fight against the radicals, it may one day be.  Much is made of the fact that Islamists only make up a small percentage of Muslims worldwide.   But as I have written before, that kind of dismissal ignores the fact that we are still talking about more actual people than the total combined populations of Germany, Japan, and Italy, as the world went to war in 1939.

There are, in fact, clear parallels – even direct connections – between Islamism and the mechanisms of fascism and Marxist-Leninism.

As Daniel Pipes has noted, “Islam is the most political of religions, the one most oriented toward power.”  He further suggests that Islamism – the kind that is radical, utopian, and totalitarian, “is a modern evolution of something that was always in Islam but takes it to an ideological extreme.”

It would follow, therefore, that Muslims themselves – particularly those who fly the flag of moderation – must deal with the cancer in their own religious body.  Otherwise, they run the risk of ensuring the ultimate identity of Islam with terror, hunger for power, and violence.

In the 1920s, when the Ku Klux Klan paraded through the streets of America preaching a doctrine of bigotry and attaching their venom to an image sacred to all Christians - the cross - it took many Christians a long time to repudiate the hooded fanatics.

It was simply because many “Christians” (all white ones, of course) found themselves sympathizing with some of what the Klan stood for.  They preached a form of patriotic Americanism that resonated with many in America’s heartland – especially during that decade of seismic social change.

Sure they wore hoods and had funny titles for everything, but they also waved the flag and carried the cross.  So what if they burned the latter.  This is how some rationalized their sympathy with such a glaringly un-Christian cause.

Using Christian imagery, clergymen, and even churches, for a short time the KKK had a place in the hearts of many “God-fearing” Americans.  In some places, a person could not be elected to office without Klan support – it was a big deal for a while.  It was an ugly chapter in the history of Protestantism in American church history.

When the KKK was finally repudiated as a major movement in America, it still took some “Christians” a long time to get it out of their system.  The “nativist” instinct lived on, though spoken of only in whispers and with subtle winks of the eye.

I suspect it is that way with many of our Muslim neighbors these days.  They may not buy into the terrorism and violence, as they practice a more moderate Islam, but there may be a few things that simply resonate with them.  Possibly this is why it is so hard to find moderate Muslims who will actually renounce Islamism.

Former Vice President Dick Cheney may well be one of the most unpopular people in the country these days, but even a broken clock is right twice a day.  And when he warns us – as he did this week – that the country is swiftly becoming more vulnerable to terrorist attack, in light of the body language of the new administration, he may be on to something.

Cheney, speaking of Islamist terrorism in general, and particularly Gitmo detainees, recently reminded us “These are evil people. And we’re not going to win this fight by turning the other cheek.”

It’s like that old story about the man who sold a mule, telling the buyer that the animal would do anything as long he was asked nicely.  The next day, the buyer returned and shared a tale of frustration because the stubborn mule would not do a thing – no matter how many times he was asked nicely.

The seller picked up a wooden two-by-four that was leaning against his barn.  He walked      right up to the mule and hit the animal in the head.  Then he whispered, "Please pull that plow." The mule started moving as fast as he could.

"I thought you told me to never mistreat your mule," the farmer told his neighbor with a questioning look on his face.  The farmer hesitated and said, "Like I said, talking nice to him works every time. But, sometimes you have to get his attention first."

I am all for reaching hearts and minds, but German entnazifizierung (denazification) could not happen until we had their attention by actually winning a war.

Re-education is much more effective as a post-war exercise.