The Perilous Journey from Gitmo to NIMBY 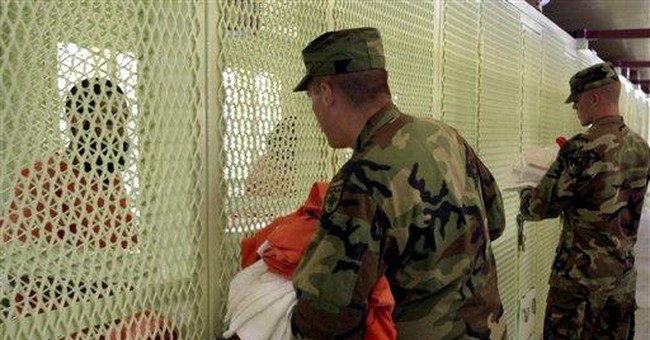 There is a Caribbean legend that when Christopher Columbus, on his second voyage to the new world, came ashore at what he that day called Puerto Grande (now Guantánamo Bay, Cuba), he was less-than-impressed.   No gold was to be found, nor gems – not even fresh water.  He left the next day mumbling something in Italian that comes down to us more than 500 years later loosely translated as “this place sucks.”

A brass plaque marks the spot, though not the actual language of the moment.

This arid and unwelcoming spot of eroding land is these days the focus of national – even international – attention as the Obama administration takes over in Washington.  Among the first actions taken by our new president has been a move toward fulfilling a promise made all along the recent campaign trail – to close GITMO “within a year.”  This order also includes halting all trials currently under way at the facility, where as many as 800 “detainees” in the war against Islamist terror are being held.

Taking a page from the great explorer’s phrase book I might add: “This decision sucks.”

Though any potential relocation of those held at GITMO is at least a year away, the suspension of all trials should send chills throughout a country still basking in the warmth of the recent inauguration.  Robert Spencer, director of Jihad Watch, reminds us:  "When you take the case of Omar Khadr, whose trial was halted, there is a great deal of evidence that he is not only guilty of jihad activities but his family also has been deeply involved with Osama bin Laden and al-Qaida for years."

And Khadr is just one of many dangerous people who may be emboldened by the new directive.

I believe we are on our way – a slippery slope of sorts - to seeing the very idea of a “war on terror” morph into something more benign.  First it may become a Truman-like “police action” against bad guys.  But what I fear most is the potential for a dangerous, but vital, conflict to be eventually redefined as a moral-equivalency “game” of misunderstanding between shirts and skins.

One top House Democrat, John Murtha of Pennsylvania – a man who has been a vocal critic of most aspects of the war we have been fighting since the attacks of Sept. 11, 2001 – is so pleased with Mr. Obama’s action that he would apparently welcome the GITMO prisoners to a facility in his district.  But he notes, with a “darn-it-all-to-heck” dismissal, that there are no maximum-security facilities in his area.  So he will be spared “not-in-my-backyard” (NIMBY) letters from sane constituents.

Interestingly, just as the nation begins to grapple with the actual consequences of noble-sounding utterances about civil rights and liberties for enemy combatants in a time of war, there is a new resource making a bit of a splash.  Timing is everything they say – and Lt. Col. Gordon Cucullu (retired Army) has written a book that is being released at just the right moment.

This Tuesday, January 27th, INSIDE GITMO: The True Story Behind the Myths of Guantánamo Bay will hit bookstores across America – and it is a must read.   I have spoken at length to Mr. Cucullu about the book and its development, and have read an advance copy.  It is a monumental contribution to the great national debate we should be having about what has really happened at GITMO, and what will likely happen upon the closing of that important facility, complete with the transfer of very dangerous people to a neighborhood near you.

Col. Cucullu initiated the project several years ago after hearing so many reports of abuse going on at GITMO.  He decided to find out the facts for himself.  Over the course of five separate visits he inspected the facility in its entirety, interviewed guards, nurses, cooks, and other personnel.  What emerges is a compelling description of what day-to-day life has been like in the facility, these past several years.

The book details the techniques used in interrogation, how detainees communicate with each other, even the food they eat and medical care they receive.   It highlights how dangerous it is at GITMO – but not for the inmates, rather for the guards and staff.

People who have spent time at GITMO tell me that prisoners have been treated better there than they are at prisons in America.  In fact, it is commonplace for American personnel to be the recipients of abuse meted out by the Guantánamo detainees.   And when provoked by the bad guys, our people can do nothing to respond or retaliate.

I wonder how stateside wardens and guards will handle these “special” people?

Col. Cucullu reminds his readers that, over a multi-year period, thorough investigations covering more than 24,000 interrogation sessions at GITMO revealed only three actual violations.  He also notes that the average detainee in Cuba sees a physician four times a month (the average American does so three times per year).

The book also reminds us that in 2007, 94 United States senators voted in favor of a “nonbinding” resolution that GITMO detainees “should not be released into American society, nor should they be transferred stateside into facilities in American communities and neighborhoods.”

Cucullu acknowledges that in the immediate aftermath of the 2001 terrorist attacks things were done that were certainly excessive, motivated by what had just happened and in fear of another attack.   But any such tendencies were corrected early on and reports to the contrary are simply politically motivated distortions and exercises in misinformation.

Get the book.  Read it.  Read the end and source notes, too.  You be the judge.

The idea of transferring hundreds of detainees to the custody of the American prison and court system may resonate with some and sound rather civil, but many people are simply not thinking this through.

I know the mantra is that some of these people don’t belong there, they are innocent – they are just farmers or peasants.  And Mao and Castro were mere agrarian reformers.  But frankly, GITMO is not “the gulag of our time” – as some have described it.  There are bad people there – people who would love to kill you and me.  As a norm, we believe someone is innocent until proven guilty, but the presumption is quite different when dealing with enemy combatants in time of war.

These terrorists would even gladly kill those who promote their cause and freedom.

If GITMO detainees are brought stateside and, at least in some cases, mingled in with our mainstream prison population, what about the potential for recruitment?  American prisons are already hotbeds of rage-driven fanaticism and conversion to terrorism.  We don’t need more catalysts for terrorist breeding on the “inside.”

And what happens when these “detainees” have their day in an American court?   One doesn’t have to be a legal expert to figure out that battlefield evidence is difficult to gather and document, at best.   Those who want the “warm-fuzzy” of seeing a misunderstood terrorist go free to sin no more, should watch an occasional episode of TV dealing with evidence, loopholes, and criminal investigation.

And when the first really bad terrorist dude has a case against him dismissed because of evidence left on a battlefield somewhere, he will walk free and blend in with us.

Then Mr. Formerly-GITMO-Detainee-Who-is-Now-Free will do everything he can to bring the battlefield to a backyard near you.