The Barack Ballad of Abraham, Franklin, and John 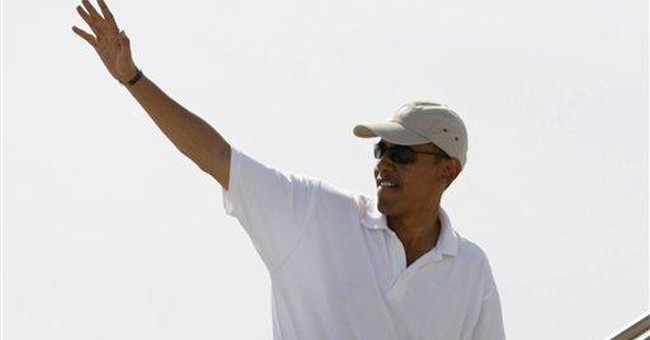 With apologies to Dion and his now 40-year-old song - Abraham, Martin, and John - I see the ghosts of three past presidents standing slightly off stage as the nation watches the approach of inauguration day.

The ancient Israelites tended to name-drop a patriarchal hat trick when they wanted their rhetoric to stick.  Crying out about, “the God of Abraham, Isaac, and Jacob,” was enough to speak with authority.  For a politician these days, especially the highly successful one who will have to settle on seeing the White House from his Hay-Adams Hotel room window before actually moving in, there is no better political triumvirate to invoke than the really big three: Abraham Lincoln, Franklin D. Roosevelt, and John F. Kennedy.

President-Elect Barack Obama’s inauguration will certainly be one to remember.  Anticipation alone exceeds anything in recent memory.  The convergence of historic imagery and the fact that so many challenges await our 44th president, make this transition something that rivals only a few such moments from our nation’s past.

The inaugural prayer has become a source of controversy, and now the oath itself – at least the suffix “so help me God” – is under fire.  I am sure Mr. Obama hopes what he has to say in his maiden address as our new president will be so resounding that any other pre-inaugural firestorm will fade into distant memory like that burning space heater on the platform in January 1961.

From the start, the Obama campaign dispensed with any pretense of subtlety as it sought to conjure up and identify with images of past presidential greatness.  He announced his candidacy surrounded by all things Lincoln, solidified political support at a key primary point by tapping into the still apparently potent power of Camelot, and raced to the November finish line sounding a lot like Mr. New Deal.

His cabinet complete, his team now in place, and his much deserved (and no doubt needed) Hawaiian vacation over, the next event on the calendar is the inauguration itself.  And all pre-inaugural controversies notwithstanding, central to that event will be the speech.  The new man from Illinois has already demonstrated the ability to come through during big speeches – but this one is the granddaddy of them all.

No doubt he has been reading up for a long time on the inaugural addresses of his ghostly trio.  But will he be able to deliver something that will rise to the standards they set?

When John Kennedy was working on his inaugural address, he charged speechwriter Theodore Sorenson with studying Lincoln’s Gettysburg address.  JFK was very conscious of history.  When he died, his widow commissioned a quick review of our 16th president’s funeral to use as a working model for her assassinated husband’s sad and somber farewell.

Of course, Franklin Roosevelt’s 1933 address is probably the most famous – largely because he entered office just as the nation’s economic outlook was at its bleakest.  One thing Mr. Obama needs to remember though, if finding inspiration from FDR, is that when the 32nd president took office things were much worse than they are today.

Those who advocate a New Deal-like approach to the current economic situation would do well to read up on their history.  If there is any parallel to what has happened recently and the events of The Great Depression, what should be remembered is that we are only a few months in, following a market tumble.

In Great Depression terms this is 1930 – not 1933.  In January of 1930, the market had rebounded and there was little indication that things were going to get much worse.  In fact, a case can be made that it was the actions Herbert Hoover and the Congress took in 1930 – things like the Smoot-Harley Act (protectionism), raising taxes, and attempts by the government to manage the economy – that led to a continued downward spiral.  Add to all of this the fact that more than half the nation entered a period of sustained drought that year (timing is everything), and we had the makings of what became a long national perfect storm.

Then FDR came to town and kicked it up a notch.  Thus began a frenetic period when the “best minds” made things up as they went along, content that they simply knew better because they were running things.

I once heard it said that a fanatic is someone who, when faced with the clear failure of a plan of action, determines to work harder and redouble the efforts.

Reading the entire speech Mr. Roosevelt gave on March 4, 1933 – beyond the “fear itself” stuff - is, in fact, quite chilling.  In true populist fashion, the new president railed at the enemies that would become his usual suspects for more than a decade: business leaders and those he called “money-changers.”  He used his words as a scourge to drive the culprits out of town:

“The money changers have fled from their high seats in the temple of our civilization.  We may now restore that temple to the ancient truths.  The measure of the restoration lies in the extent to which we apply social values more noble than mere monetary profit.”

He called on the nation to fix the “overbalance of population in our industrial centers,” suggesting migratory “redistribution.”   Pack your bags and go west, or south, young man.  Roosevelt talked of extensive “national planning” and unprecedented governmental “supervision” of major sectors of the economy (and the country itself).

And Franklin Roosevelt threatened that if the Congress did not bend to his will on these things, he would seek “broad Executive power to wage war against the emergency, as great as the power that would be given to me if we were in fact invaded by a foreign foe.”

Ray Moley was one of the men tasked with helping FDR craft the speech, and in his handwritten notes the word “dictator” appears (though without any elaboration).  Possibly this was bounced around as a word fitting for that whole “broad Executive power” idea.

It is known that many on the left in those days saw virtue in the “strong man” approach to leadership.  A movie (funded by William Randolph Hearst) was produced at the time called Gabriel Over the White House, starring Walter Huston, and extolling the virtues of “benevolent” despotism.

FDR loved the movie – even offering some suggestions about the script.

Mr. Obama would be wise to put the FDR speech away, however – there is not much there that really applies to current reality.  At least, let’s hope not.

That leaves us with the ghost of Old Honest Abe.  Like Mr. Obama, he came to the presidency with a somewhat unimpressive resume.  But he also knew a thing or two about speech making.  His address at New York’s Cooper Union in February of 1860 paved the way for the Republican nomination.   Before that he had gained fame and a reputation for effective rhetorical argument during his legendary debates with Stephen Douglas.

We think of Lincoln these days as a great communicator (a traits most of our more effective presidents have in common).  His address at Gettysburg is still studied.  His Second Inaugural was a classic with lines like “with malice toward none and charity for all.”

But can anyone quote a line from Abraham Lincoln’s first inaugural?

He put in a plug for the postal service: “The mails, unless repelled, will continue to be furnished in all parts of the Union.”  Inspiring stuff.

Regarding slavery he “boldly” said: “I have no purpose, directly or indirectly, to interfere with the institution of slavery in the States where it exists. I believe I have no lawful right to do so, and I have no inclination to do so.”  He was, as Winston Churchill once described a political foe, “resolute to be irresolute.”

He, of course, did elaborate on the Constitutional idea “to form a more perfect union,” probably the most memorable portion of the speech.  But beyond that, the fact is that Lincoln’s first inaugural was a bomb.  What he had to say was important – and he spoke against the backdrop of perilous times.  As a speech, however, it was not memorable and no one studies it much these days.  It was too long – more than 3,600 words and delivered in about 45 minutes.  And he tried to cover too many bases; a big mistake in inaugural addresses.

There is a reason why JFK had Ted Sorenson study the Gettysburg Address, not Lincoln’s first inaugural.  The speech at the cemetery in 1863 was a mere 278 words long.  Kennedy’s inaugural was 1,364 words long and delivered in slightly under 14 minutes.

FDR flirted with long-windedness – his 1933 address came in at about 1,900 words.  But, his tag line, the one that is remembered, was right at the beginning.  It was all down hill from there.

John F. Kennedy knew, like Abraham Lincoln grew to understand throughout his presidency, that brevity was the soul of wit.  When a speech is shorter, a great line even toward the end will resonate – as did the “ask not” part.

So, before this column becomes ironic, let me simply suggest that President-Elect Obama follow sage advice ministerial students and seminarians have heard for years as they study how to preach: “Stand Up – Speak Up – Shut Up.”

OK – one more and I promise I am done.  An old – and somewhat cheesy - “preacher joke” has the clergyman’s wife whispering in his ear as he goes to the pulpit “K.I.S.S.”  This stands for “Keep It Short, Stupid.”

On January 20th, I will keep an eye on Michelle.