Democrats Between a Rock and a Hard Place

David Limbaugh
|
Posted: Nov 29, 2019 11:59 PM
Share   Tweet
The opinions expressed by columnists are their own and do not necessarily represent the views of Townhall.com. 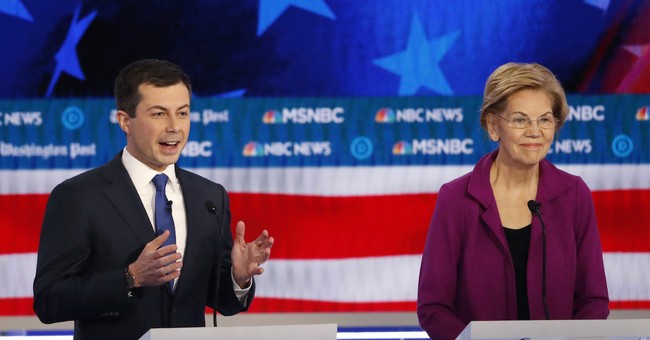 Is it just me, or has it also occurred to you that Democrats, in this all-important year leading up to the 2020 election, rarely talk about policy issues? They are exclusively focused on removing President Donald Trump, and they only discuss policy during their somniferous debates.

In the Democrats' defense, their mainstream media bosses cover nothing but Trump and Trump crucified. Also, some Democratic Party leaders probably realize that their ideas don't fully resonate with the people and so it is in their interests to keep the focus on Trump.

But to their surprise, it seems they have made a grave tactical error in putting all their rotten eggs in the impeachment basket. Polls indicate their strategy has backfired, especially among independents and particularly in the swing states.

Perhaps people are sensing that the Democrats are focused more on Trump than on solving the nation's problems. Only if you believe -- as do the Democrats' leftist base and Republican never-Trumpers -- that Trump is the nation's major problem will this myopic approach likely appeal to you. Most people, however, aren't neurotically obsessed with Trump and still care about the economy, the border, abortion, guns, foreign policy and other issues.

But let's step back a minute. Is the Democrats' decision to fixate on alleged Trump corruption just a matter of strategy, or could it be just as much an organic development flowing from the same extreme mindset that drives their policy agenda? Could it also be that they are so convinced of the superiority of their ideas that they think they don't have to spend as much time selling them? Even though some Democratic Party leaders are nervous, they are prisoners of their base and their media masters.

I believe the radical leftist ideology thus dominating the Democratic Party leads to the left's malice toward Trump, which actually has far less to do with his so-called coarseness than with his steadfast and mostly successful opposition to the party's policy agenda.

Leftists aren't used to losing these days. Everywhere they look, their ideas appear to be dominating. People with contrary opinions are being muzzled and shamed throughout our culture. Anyone remotely within their orbit who strays from their orthodoxy is forced to repent and apologize for their heresy.

The left has been further emboldened by former President Barack Obama's success at cramming many of his ideas down America's throat in his quest to fundamentally transform this nation away from its founding ideas -- from identity politics to Obamacare to abortion to same-sex marriage to his war on domestic energy to an explosion of the administrative state.

It is interesting that leftists and many never-Trumpers believe that Trump supporters are a cult, robotically following their leader and mindlessly absorbing ideas of their group, when, in fact, leftists are the ones obsessed over Trump, intellectually imprisoned by their own groupthink and seeing everything through their Trump-colored lenses. They are the ones mired in their own echo chamber, largely oblivious to what makes the rest of us tick.

Proof of leftists' ideological isolation is their cluelessness about the pitfalls in pressuring Democratic Party leaders to move so far left so fast. They obviously have no idea that there are tens of millions of us out here in flyover country -- and many more than you think in purple and even blue states -- who haven't given up on the ideas that make this country great and exceptional.

For all their smugness about Trump's imminent demise and the superiority of their "enlightened" policy positions, they have an uphill battle going into 2020, which is partly attributable to their arrogant dismissal of the rest of the nation and partly to Trump's policy successes.

As much as they've succeeded in indoctrinating many young Americans and others, they still have a long way to go in making their case for abortion on demand up to the point of birth and beyond; open borders; free health care, education and sanctuary for illegal aliens; socialism; single-payer health care; identity politics; gender anarchy; radical environmentalism; confiscatory taxes; and the selective suppression of speech and religious liberties.

In an open and honest airing of these ideas, Democrats still cannot win national elections. Some of the party's old guard leaders realize this, which is why they concentrate on Trump, conceal their party's radicalism and have recently been trying to moderate their ideas.

But they are caught between a rock and reinforced concrete. Concentrating on Trump alone isn't working, but pivoting to their radical agenda might be even riskier, however much they try to soften it. Look for them to become even more desperate to impeach Trump, or for a bitter intramural struggle between the radical elements dominating their party and the few remaining leaders who realize that this extremism won't yet sell nationally.