The Fall of James Comey

David Limbaugh
|
Posted: Apr 20, 2018 12:01 AM
Share   Tweet
The opinions expressed by columnists are their own and do not necessarily represent the views of Townhall.com. 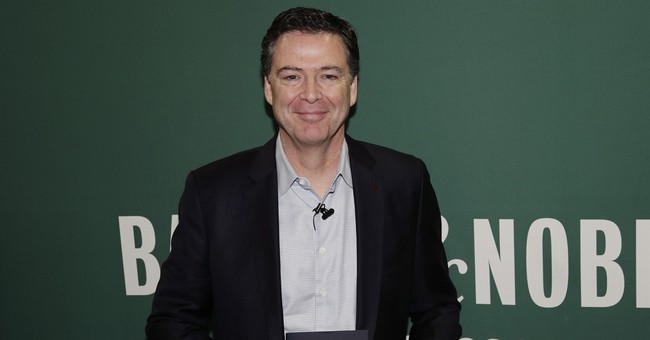 I originally assumed that former FBI Director James Comey is an honorable and truthful man who was striving to be objective and avoid undue political influence. He has earned my change of mind.

Our law enforcement and judicial institutions should operate, to the extent possible, above politics to ensure equal justice under the law.

The term "justice is blind" is more than a cliche. Justice, by definition, must be administered impartially, without regard to wealth, power, gender, race, religion or any other special status. The law must guide the judicial system, from start to finish -- from the decision to indict to the verdict of guilt or acquittal.

Comey presents himself as a consummate professional, a moral paragon, dedicated to the law and consciously above rank political concerns. He has systematically undermined this carefully crafted image with his unseemly forays into the public arena, his professional decisions, his public statements, his book and his interviews.

FBI officials and agents I've met have always been highly professional, discreet and circumspect -- so close to the vest that they won't even share with friends information pertaining to ongoing investigations. They want to make clear that they operate with no favoritism and that their allegiance is to justice and the law.

I assumed Comey would be no different. He initially projected a patina of professionalism, as we witnessed during parts of his news conference in which he announced he wouldn't prosecute Hillary Clinton and during his congressional testimony. He came off as consciously committed to operating above the political fray and following the law.

As his news conference unfolded, it became obvious that he was trying to be all things to all people, but instead of pleasing everyone, he alienated most. He meticulously documented the litany of damning facts against Clinton as if he were presenting a closing argument to a jury. But then he essentially told us that none of that mattered because she hadn't intended to break the law. My BS antenna started sending me strong signals, which were later confirmed when consulting the relevant statutes. He couldn't have laid out a better case for gross negligence and even willful criminal behavior, yet he chose to characterize her actions as noncriminal. If this weren't bad enough, we later learned that he drafted a statement clearing Clinton of charges two months before the FBI interviewed her in its probe. His twisting the law into a pretzel to avoid prosecuting Clinton screams that political considerations were paramount and superseded any legal analysis.

Moreover, Comey admitted in his interview with ABC News' George Stephanopoulos that he factored the likelihood of Clinton's winning the election into his decision to publicly announce reopening her email investigation, fearing that she would immediately become an illegitimate president. He might as well have just worn a sign into his interview reading "political animal."

Comey's decision to write a tell-all book about an ongoing investigation on which he was the senior investigator and for which he could be a witness was abominable. It has gravely diminished him and the FBI, and it has contradicted his claim that he is concerned with protecting the image and integrity of the bureau. I doubt that Comey would have ever been appointed to such a position in the FBI had people known he was the type to air dirty laundry and share inside information on matters that demand discretion. Indeed, many current and former colleagues are recoiling with disdain.

Some of Comey's statements in the book and interviews were particularly inappropriate. His duty of professionalism didn't end when he left office. His comments on Donald Trump's appearance were especially petty, more fitting for a teenage Twitter thread than from a former high-ranking law enforcement official.

Even worse was his reckless opinion to Stephanopoulos that it's "possible" that Trump obstructed justice, even though he admitted there is no evidence. Then there were his gratuitous statements that the Russians may have something on Trump and that it's possible the alleged incident involving prostitutes in a Moscow hotel room happened. How could anyone watch that interview and still respect Comey's intellectual honesty?

Free speech guarantees certainly apply to this publicity hound, but they don't insulate him from our reasoned opinion that he has no business saying Trump behaved like a mob boss or that he is morally unfit to serve.

Comey's conduct in this affair has been disgraceful. Deputy Attorney General Rod Rosenstein concluded that he made "serious mistakes," that he won't admit his mistakes and that both Democrats and Republicans called for his termination. Former attorneys general, judges and lead prosecutors believe that Comey violated his duty to preserve, protect and defend the FBI. He violated Justice Department policies and tradition. And he leaked four memos, at least one of which was classified, to a friend for publication instead of turning them over to investigators.

I suspect that Comey began writing this book expecting financial profit and professional and personal vindication. I'm afraid he'll have to settle for the big bucks alone. I would feel sorry for him if he weren't so sanctimonious.