David Limbaugh
|
Posted: Jan 20, 2017 12:01 AM
Share   Tweet
The opinions expressed by columnists are their own and do not necessarily represent the views of Townhall.com. 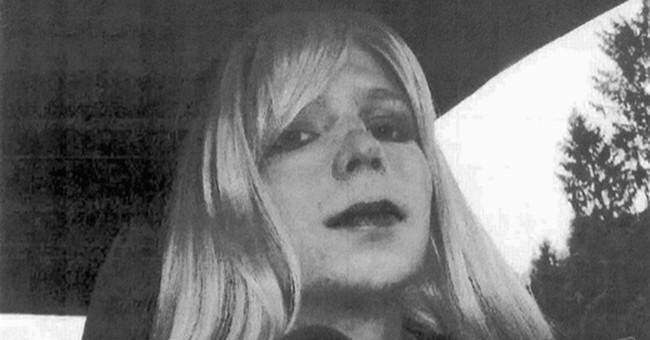 I highly doubt that President Obama commuted Chelsea Manning's sentence out of compassion -- and suspect it was just one more slap in America's face on his way out the door.

Out of all the possible beneficiaries of his presidential pardon pen, why would Obama single out this unrepentant traitor for leniency? Well, Manning was convicted of espionage as Bradley Manning. I suppose Manning's gender transformation could have played a part in Obama's mind, as those types of leftist causes always seem to trump other concerns, such as national security.

What possible mitigating facts could move a person of ordinary sensibilities and a healthy respect for our armed services, our national defense and the rule of law to ignore the mountains of incriminating and aggravating evidence and substitute his judgment for the military trial judge's?

Well, the political left is always looking for a good whistleblower -- unless he or she is exposing the misdeeds of a leftist administration, such as the unrewarded witnesses against the government in the Operation Fast and Furious fiasco. When the informant can embarrass the U.S. military -- that takes the cake.

Among the hundreds of thousands of classified documents that Manning stole with the specific intention of delivering them to WikiLeaks for public dissemination was a video of American soldiers in Iraq involved in a very problematic and possibly illegal shooting.

But if exposing this video was Manning's burning motive, why didn't she solely release it and not the truckloads of other sensitive materials?

Even if we were inclined to sympathize with Manning's gender confusion (though I thought the left would never consider gender transformation as anything other than triumphant liberation), would it be worth it to send a signal diminishing the gravity of this offense and the harm and potential harm it caused?

The military judge had before her all exculpatory evidence when she rendered her decision and sentenced Manning. She could have sentenced Manning to 136 years but chose 35 years instead, which suggests she weighed all the positive and negative factors. Moreover, Secretary of Defense Ash Carter and the Pentagon opposed President Obama's actions.

Understand that Manning pleaded guilty to the charges, and they were based on a shocking immensity of damning evidence. Manning was a private first class deployed on foreign soil from November 2009 to May 2010 and had access to top-secret information. During that time, she downloaded some 400,000 classified files concerning the Iraq War, more than 90,000 from the war in Afghanistan, a quarter-million diplomatic emails, classified videos of U.S. airstrikes and classified files from the prison in Guantanamo Bay. (This last one probably earned her bonus points from Obama.)

Does this sound like someone who wanted to expose an isolated incident of alleged wrongdoing or someone who was deeply committed to harming the United States, compromising fellow soldiers, endangering Americans throughout the world and aiding and abetting the causes of terrorists and other enemies of the United States?

What were the consequences of this betrayal? It sent the State Department into crisis and caused great expenditures of time and money to assess the damage from the leaks. Fox News reports that ambassadors were forced to resign and CIA station chiefs were recalled. And according to Defense Department officials, Manning's treachery accelerated the Arab Spring and possibly contributed to the rise of the Islamic State group. Further, two intelligence sources confirmed that after the release of two Afghanistan reports in 2010, the Taliban reportedly went on a killing spree and took out everyone fitting the description of those working with the United States. These sources said there is no question that the Taliban killed people after the leaks and that this had a chilling effect on subsequent recruiting.

Where are liberals on all this? They were apoplectic over Russian attempts to interfere with our election but are immovably indifferent to national security leaks that compromise the interests of the United States and benefit Russia and other foreign governments. Let's please not indulge the fiction that their interest in the Russian interference allegations is anything other than an opportunity to delegitimize Donald Trump's election and his presidency.

Obama has continually shown us where his sympathies lie. Even usually mild-mannered Paul Ryan said this commutation is outrageous and sets a "dangerous precedent" that those guilty of compromising our national security will not have to pay for their crimes.

Obama is also sending a signal that protecting our troops and other personnel who devote their lives to defending the nation and keeping Americans safe is a low priority -- that safeguarding our national security interests and secrets is just not that big of a deal.

Sen. John McCain called the commutation a "grave mistake" that could encourage more espionage and undermine whistleblowers who operate through the proper channels. With all due respect to Sen. McCain, this was no mistake. It was a deliberate action by President Obama through which he once again communicated his disrespect, if not outright contempt, for the greatest military on the face of the earth, which was under his charge, regrettably, for the past eight years.