David Limbaugh
|
Posted: Apr 15, 2016 12:01 AM
Share   Tweet
The opinions expressed by columnists are their own and do not necessarily represent the views of Townhall.com. 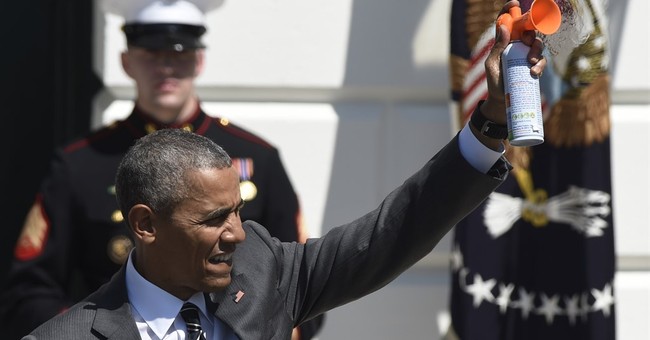 It's one thing to be upset with the so-called Republican establishment for failing to stand up to Barack Obama and his destructive policies, but it's another for a GOP presidential candidate to exploit that anger illegitimately against a fellow anti-establishment candidate.

Many of us have been critical of the GOP leadership for opposing conservatives in GOP primaries, not backing conservatives in office trying to do the right thing, always advising that Republicans dilute their message to attract independent voters and not sufficiently recognizing the threat President Obama represents to this nation and opposing his agenda.

From the beginning, grass-roots conservatives, based on abundant warning signs, warned that Obama would be an extremely progressive president, and we were right. Despite Obama's empty promise to be bipartisan and conciliatory, we knew what a rabid partisan he would be. We took him seriously when he announced he would fundamentally transform America, and he has done just that, probably even more than we feared.

I wrote two books chronicling Obama's destructive agenda, and those were before the past two years, when he has been even worse -- across the board. He has increased spending and taxes and refused to reform entitlements, thus doubling our national debt to exceedingly dangerous levels. He has deliberately downscaled our military, also to perilous levels. He has unilaterally pulled us back from the war on terror, being more concerned about not offending Muslims than with defending American citizens. He has chosen not to enforce our borders. He has systematically abused his executive authority, flouting the Constitution. He has engaged in a war on conventional energy sources and promoted failed alternative energy sources. He has grossly expanded the administrative and regulatory state. He has orchestrated the corruption of the IRS and enabled the gunrunning operation "Fast and Furious." He has engaged in a war on religious liberty, exclusively against Christians. He has precipitously

withdrawn from Iraq, thus squandering our work and betraying our lost lives and treasure. He has pushed a liberal social agenda, from increasing federal funding for abortion to ramrodding the legalization of same-sex marriage. He has led from behind in all aspects of foreign policy, alienating our allies, including Israel, and coddling our enemies -- especially facilitating Iran's quest to obtain nuclear weapons and fund global terrorism. He has reversed welfare reform and its progress in restoring the nuclear family and freeing people from its insidious clutches of dependency. He has severely damaged our health care system, and he has divided the nation more than any previous president along the lines of race, gender and income. And so much more.

I don't want to write a third book on Obama, though he's not finished doing his mischief. He would love, for example, to replace Justice Antonin Scalia with an activist liberal judge and issue more lawless executive orders granting benefits to people here illegally and promoting environmentalism. People have a right to be very upset, not just with Obama but with the GOP establishment for not doing enough to stop him.

Though we must keep fighting Obama, we also must turn part of our focus away from him and toward electing the Republican candidate best-equipped to reverse the damage Obama has done, reignite economic growth, secure our defenses, rebuild our foreign alliances and stand for life and American families.

Seventeen candidates originally threw their hats into the ring for the Republican presidential nomination, and the field has narrowed to three, though the third -- John Kasich -- has no earthly chance and can only be considered as a spoiler or a brand builder or as positioning himself to be vice president.

Trump holds himself out as an outsider because he's never held office before. Ted Cruz is an outsider, in the sense that he has openly battled the establishment elements of his own party since he came to the Senate.

Most GOP elected officials have still not endorsed either Trump or Cruz, but as much angst as establishment types have for Cruz, most fear Trump far more, not because he's an outsider but because they think he could be a disastrous president.

Trump wants to establish himself as the sole outsider and is strenuously trying to paint Cruz as an insider, citing a few recent high-profile Republican endorsements and the effort of Mitt Romney and others to stop him. Trump supporters say Cruz has sold out to the establishment for these reasons and because he is the most likely beneficiary of the "Never Trump" movement.

Trump has also wrongly charged that Cruz colluded with the establishment to "steal" Colorado. In this way, Trump hopes to seal his claim to be the sole aggrieved outsider. He says that working together, they cheated and disenfranchised millions of voters.

Trump knows full well that Colorado wasn't stolen and that he began there on a level playing field with Cruz, but he didn't do the necessary groundwork to compete. But he also knows that his supporters will believe otherwise and become more entrenched if he cries foul loudly enough. He hopes to draw supporters away from Cruz and woo the undecided in upcoming states by leveraging these allegations in service to establishment/Cruz conspiracy theories.

Trump is now laying the groundwork to support the narrative that unless he is chosen at the convention, the nomination will have been stolen from him. Trump knows that long-standing rules require that a candidate win more than half the delegates, before or during the convention, yet he's demanding, in essence, that the candidate with a plurality of delegates going in must be anointed, which has never been the case.

Many of us have been fighting the establishment for years, but let's not lose our heads and make it the scapegoat for everything, including the claims that it is stealing votes and disenfranchising voters. Trump is pursuing a reckless path, because he is inflaming the passions of people who are already fit to be tied, partially for legitimate reasons. He is setting the table for post-convention antipathy, which would inhibit reunification of the party should Cruz get the nomination -- and even if Trump were to get it.

If there were actual cheating going on, I would decry it from the highest mountain, but it is just as wrong to allege cheating when it isn't occurring for your own political benefit. Could we please dispense with these ridiculous allegations and get on with this process without further enraging the voters?