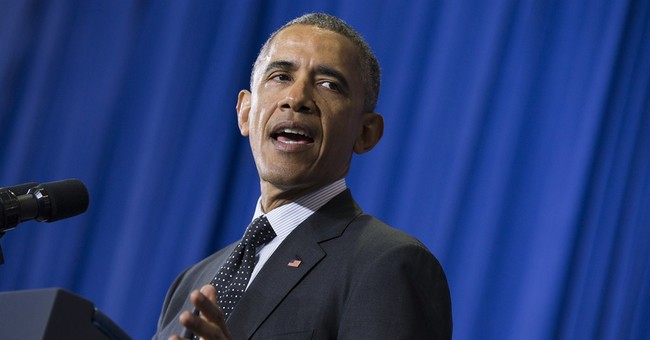 Trending
President Obama seems more interested in defending the religion of Islam than in defending the United States against the threat of Islamic jihad, but Islam isn't under attack; we are.

Obama has created a straw man -- or fattened one up that others created. The United States isn't at war with Islam -- or even radical Islamists, for that matter. By incessantly and wrongly suggesting we are hostile to Islam proper, Obama is giving credence to that charge and planting a seed in the minds of Muslims, thereby aggravating the problem he claims he wants to diminish.

Nor do we target Muslims as Obama recklessly suggests. Last time I checked, our authorities don't profile Muslims in any way, at any time, in any capacity. Have you ever seen the Transportation Security Administration, for example, singling out Muslims for special scrutiny at the airport? If anything, this administration is so paranoid about creating that impression that it has a policy of erring on the side of coddling jihadis -- as opposed to protecting national security -- such as when it declined to pursue leads concerning U.S. Army Maj. Nidal Hasan's ties to radical clerics that might have prevented his fatal shootings at Fort Hood in 2009.

Obama can convene unserious summits instead of traveling to France to join hands with world leaders against jihad; he can play semantic games with unnamed "violent extremism"; he can cite irrelevant examples from a thousand years ago of excessive violence at the hands of Christians; he can point out how many Muslims have been killed by other Muslims; and he can laud Muslim individuals for acts of heroism against jihadis. But he can't change what we all observe.

The stubborn reality is that acts of terrorism in the world today are overwhelmingly committed not by Christians, Jews, Buddhists, Hindus or Zoroastrians but by those claiming to be Muslims, no matter how much Obama strains to advance his fraudulent claims of moral equivalency.

No one is fooled by Obama's willful confusion, and the cause of world peace is not furthered by it. Yes, some people love to hear his slander of Jews and Christians, but that's not because they are silly enough to believe that these groups are engaging in terrorism but because they are not particularly fond of Judaism or Christianity and perk up every time they are vilified.

Obama protests that he just wants to make clear to the Muslim world that we are not against the religion of Islam. He says the Islamic State group and other jihadis are not truly Islamic but attempting to hijack the religion. If he is sincere about that, then why does he want to let the worst of that bunch out of Guantanamo Bay and shower them with civil rights? If he is determined to convince peaceful Muslims that we recognize they are not like the terrorists, why does he insult them by coddling the ones he claims are aberrant?

After all, if peaceful Muslims don't identify with the radicals, how would treating those radicals as enemies and enemy combatants alienate the peaceful ones? And if he believes that the billion-plus Muslims he talks about are so peaceful, why does he act as if they are on a hair trigger to become terrorists, to the point that we can't even call out the radicals among them without fear of every Muslim's turning into one?

State Department spokeswoman Marie Harf says we need to understand the root causes of terrorism and help potential terrorists to find jobs. Those who disagree are just not nuanced enough to understand the complexity of the problem.

Obama agrees, saying the radicals would have greater difficulty recruiting people to their cause if we would quit smearing the religion he holds so dear and try harder to understand and address their "grievances," including their poverty and certain unspecified democratic complaints about a civil society, both of which are so self-evidently and embarrassingly preposterous as to warrant no rebuttal.

Sorry, but it is Obama and Harf who lack nuance. They seem to view everything through their distorted lenses of community organizing and economic determinism, exhibiting a tunnel vision reminiscent of a manifestly failed Marxist ideology.

What Obama and his mouthpieces need to understand is that Islamic terrorists are not driven by grievances, unless you define grievances as opposition to their determination to create a global caliphate. They are motivated by deeply held religious and ideological convictions that are not going to be mollified by liberal domestic policy overtures. This is a spiritual matter.

Obama is doing more to fuel Islamic State recruitment by showing its potential recruits how weak we are and that Islamic State aspirations for a global caliphate are not such a fantasy if the world is rolling over for them rather than fighting them with equal and superior force.

Even if Obama is correct, recruitment is not the main issue. There are enough jihadis now to keep the world busy for more than a generation, and the more victories they win the more they'll attract to their cause.

Could we please return to reality before it is too late?