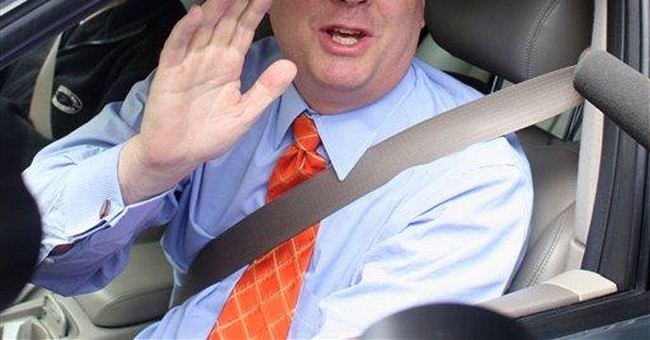 I realize that the hot topic today is racism and that both liberals and conservatives are falling all over themselves to prove how non-racist they are and, in the process, throwing anyone and everyone under the bus just to prove their bona fides.

I think it's sad, especially when the people who are emerging unscathed from this are far from blameless and those accused of the dastardly deeds of reporting this incompletely aren't quite the villains they're being portrayed as. It bothers me how little courage people have to stand up for what is right on the issue of race, mainly for fear they'll be stigmatized with charges of insensitivity toward race or, worse, racism.

It seems to me that President Obama's unchecked liberalism is in such disfavor among the electorate that supporters of his agenda often invoke the race card against opponents of his agenda both to distract attention from substantive issues and to demonize conservatives.

I truly don't believe this Shirley Sherrod story is primarily about sloppy, negligent or even malicious reporting. Obviously, fairness dictates that quotes should be reported in context. And it is indefensible for a reporter to misrepresent a person's meaning intentionally, whether from failing to provide the context or otherwise. Having met Andrew Breitbart, I sincerely doubt he reported this story with any intent to mislead.

But even if we are willing to assume, for purposes of discussion, the worst about Breitbart and condemn him for whatever reason -- e.g., because it makes us feel superior, makes us appear above racism ourselves, or serves a political cause to demonize him (and thus tea partiers and conservatives) -- where does that leave us?

Let's just say Breitbart is the worst human being on the planet (though I reject that he's even a bad guy). Are we going to allow ourselves to be distracted from the rest of the back story and from all the other vitally important issues facing us today?

Have all those who are patting themselves on the back for pointing out how badly Shirley Sherrod was mistreated studied her views? Do they automatically give her a pass for some of the other things she did say that at least bear on her class warfare mindset or, even more to the point, her willingness to imply -- unfairly -- others are racists?

She was presumably referring to the people who established slavery at this nation's founding (but don't take my word or even Andy's for what she said; listen to or read her words yourself, because there's not enough space to include her entire speech). She said: "So that's when they made black people servants for life. That's when they put laws in place forbidding them (i.e., blacks and whites) to marry each other. That's when they created the racism that we know of today. They did it to keep us divided. And ... it started working so well they said, 'Gosh, looks like we've come upon something here that could last generations.' And here we are, over 400 years later, and it's still working."

McCarthy goes on to quote Sherrod apparently addressing the motives of some of Obamacare's opponents. She said: "I haven't seen such a mean-spirited people as I've seen lately over this issue of health care. Some of the racism we thought was buried. Didn't it surface? Now, we endured eight years of the Bushes, and we didn't do the stuff these Republicans are doing because you have a black president."

Do we not see the irony in this mad rush to lionize Shirley Sherrod because she was falsely depicted as a racist by someone who took her comments out of context, when that very same Shirley Sherrod seems to be, in effect, unfairly and categorically demonizing people as racists? How about the irony in the castigation of Breitbart for smearing someone as a racist by people who routinely smear an entire group of people (conservatives) as racists?

To be clear, I'm not suggesting two wrongs make a right. But I am saying that we shouldn't allow this incident to distract us from: a) other important issues; b) the troubling statements that Sherrod did make (in context); or c) the ongoing malicious charges of racism constantly leveled against tea partiers, other conservatives and other Obama opponents, even by many of the people exploiting this incident. You've surely read about the JournoList scandal involving discussion by mainstream liberal journalists to deliberately smear conservatives, including Karl Rove and Fred Barnes, with charges of racism?

Racism is an indefensible sin, but false charges of racism are right up there with it -- bearing false witness against people and putting them in the worst possible light.