Obama vs. Insurers and the People, Part 2 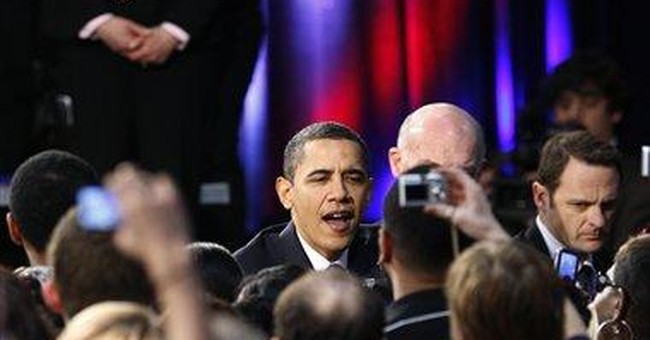 President Barack Obama obviously has no qualms about slandering people or industries that interfere with his agenda. In the same creepy manner he defamed the Cambridge Police Department without benefit of the facts, he is scapegoating the insurance companies based on his distorted version of facts.

In the past week, he has ratcheted up his war on insurance companies, who, he apparently figures, must be destroyed if he is to accomplish his Utopian dream of socialized health care. He made them the focus of his wrath again, in his umpteenth health care speech, Monday in Philadelphia. Even the White House blog, in a post titled "Moving Forward to Put the American People Ahead of Insurance Companies," frames this debate as between insurance companies and the people.

Who is Obama to be smearing health insurance companies for allegedly bankrupting people to increase their profits when his policy agenda is already bankrupting America to increase government power? As the late Milton Friedman asked the clueless leftist Phil Donahue, "Is it really true that political self-interest is nobler somehow than economic self-interest?"

Is it fair to accuse the insurance companies of arbitrariness when they refuse to cover what their contracts don't require them to cover? And isn't Obama implying that if the government were to take full control over health care, there would be no denial of coverage? We don't have to wait for his plan to take effect to know that's false. Everyone, including Obama, is aware of Medicare's denying or reducing reimbursements so drastically that an increasing number of doctors are refusing Medicare patients. Does he call that arbitrary?

In addition, whether or not you bristle at those suggesting Obamacare would usher in death panels, you are in fantasyland if you think Obamacare doesn't contemplate increased rationing -- by the government.

The Democrats' plans involve the formation of an administrative board, which would make determinations on what kind of coverage the government would pay for and, perhaps, even allow.

What's the difference between that and an insurance company's denying coverage? Well, it's worse for the government to do it, actually. The government's coverage decisions would be dictated not by a private and at least somewhat consensual contract, but by the fiat of a largely unaccountable bureaucrat whose authority would be derived from powers delegated to him by whatever administrative bodies Congress might outsource to do its dirty work. The bureaucrat's charge would not be to infuse compassion in his decision, but to coldly cut costs. Read the Democratic bills!

Though I don't belong to the "Obama is a genius" school, I know he's smart enough to realize that insurance company profits are but a fraction of rising health care costs and that it's grossly misleading to make insurers the primary villains. This is simply Chicago politics writ large in a last-gasp effort to enslave us with government health care.

First, he is intentionally mischaracterizing the Republicans' position. They don't advocate baby steps, but a series of market reforms that would not entail restructuring the entire system under government control.

Nor do they want to relax all regulations on insurance companies. They do want to remove some of the coverage mandates, not for the purpose of helping insurers, but to benefit consumers, who ultimately would have to bear the costs of elective procedures for others. Republicans also want to relax arbitrary laws preventing consumers from buying across state lines.

Further, Obama is misrepresenting his own plan as centrist and a composite of Democratic and Republican ideas. It is the last thing from centrist. His plan contemplates -- and would eventuate in -- full-blown government control, which is also deliberate and which he's on record advocating.

He has rejected outright all Republican ideas except for tort reform and "fraud and abuse." But he is just pretending to support tort reform with some meaningless smoke and mirrors. As for fraud and abuse, it's revealing that he would credit Republicans with a franchise on the concept, but his lip service promise to curb it is just more cynical sophistry. He already has a track record on this with his stimulus plan. Enough said.

Everything about this unprecedented federal power grab stinks, not least of which are the highhanded, unconstitutional and otherwise illegal methods Obama is explicitly advocating to pass this monstrosity over the informed will of the American people. We must pray he fails.