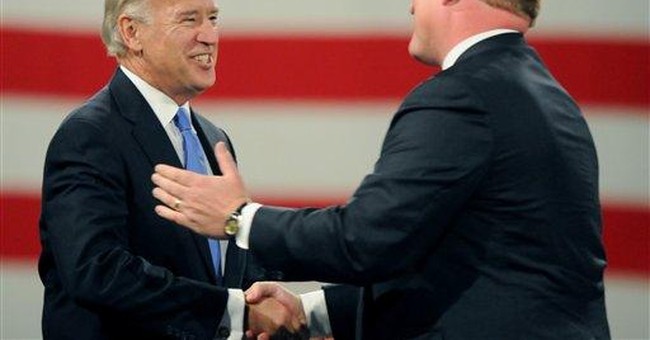 In a Democratic fundraising speech in Iowa over the weekend, Vice President Joe Biden told party loyalists that opponents of the Obama administration's agenda "should be worried about us, for we are their worst nightmare." Duh.

Finally we can agree on something, Joe. Even the liberal New York Times reports that at the current level of federal spending, the annual interest on the national debt will exceed $700 billion by 2019 -- compared with $202 billion this year. Some forecasters predict it will be much higher. This additional half-trillion dollars a year in interest is more than our current combined expenditures on education, energy, homeland security and the wars in Afghanistan and Iraq.

Oh, and the Times isn't even factoring in the cap-and-trade nightmare you and Barack have in store for us, Joe -- you know, that urgent legislation to catapult the nation back into Third World status based on hysteria generated by fraudulent science and corrupt zealots and politicians.

Nor is the Times including in its calculations the additional debt that would result from Obamacare.

Joe, when The New York Times is sounding the warnings over the exploding national debt, you and Barack insist not only on not reversing your disastrous course but also on making it worse. How can reasonable people assume anything other than that you are trying to run this nation into the ground financially?

Don't dare keep telling us your hyper-ambitious spending is a necessary evil required to deliver us from a financial crisis you inherited. Whatever crisis we face is debt-related, purely and simply. Everything else is manageable. Yet you all are deliberately increasing our indebtedness as far as the eye can see, without the slightest pretense of scaling back in this millennium. In fact, you are laboring to establish further entitlements and institutional changes that would generate exponential burdens on our debt and would be enormously difficult for any responsible and financially sane successor to undo, much less reverse.

Adding insult to injury, you are spending this money not to improve ("stimulate") the economy -- which even the most politically and economically illiterate should now realize -- but to restructure American society, dismantle our free enterprise system and impose in its place a command-control economy and political system -- in which life's decisions, including over our private health care, are dictated from Washington.

But while you and Barack are hoisting your wrecking ball, could you please spare us the pseudo-sanctimony and transparent populism in telling us that it will take "grit and determination" to outlast the "special interests" on Wall Street and the insurance industry to pass your destructive agenda?

You both know better. When you have to bribe Sen. Mary Landrieu, D-La., with a larcenous $300 million addition to your Senate bill (I know, you're pretending it's just Harry Reid's bill) that's specifically earmarked just for her state -- at the expense of the rest of the states and the national interest -- something smells to high heaven. You could at least have the decency to admit this provision to raise the bill's cost by increasing Medicaid subsidies for "certain states recovering from a major disaster" is not even motivated to help Louisiana, but to buy Landrieu's vote. And you want to talk to us, Joe, about the corruption of special interests?

Special interests, Joe? Is that how you describe 56 percent of the American people, who now oppose Obama's plan? And that's without even knowing the half of it. Or maybe you would describe them as dangerous protestors or domestic terrorists?

But, Joe, I do applaud you for your candor in telling your fawning supporters, "I can tell you with absolute certainty: (Barack's) resolve has never waivered for one instant."

Bull's-eye, Joe. You and Barack believe you know better than the American people what is good for them, and you only care what they think to the extent that it makes your job more difficult when they oppose you.

But if you told the truth about your plan -- that it would cost dramatically more than you pretend (especially considering that the benefits wouldn't begin to be paid until 2014 and that taxes would increase almost immediately); that the public option would subsume private care; that the federal government would ration care; that medical choice would be drastically reduced; that you are still trying to secure federal funding for abortion; that you intend to cover currently illegal immigrants; that after all your hype about promoting this bill to achieve universal coverage, millions would remain uninsured and penalized, to boot; that medical quality would be seriously reduced; and that overall costs would increase -- your support for the bill would be in the single digits.

So keep chanting it, Joe; you are indeed a national nightmare.