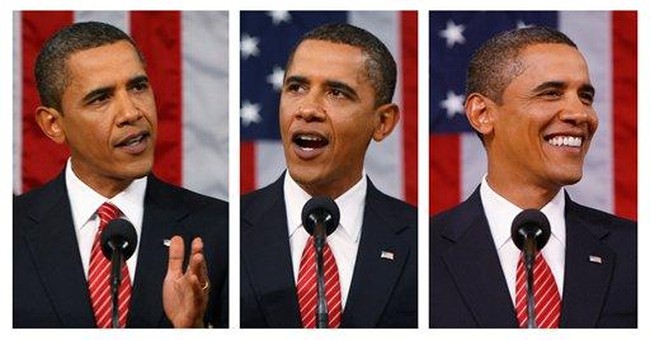 Can someone explain to me how President Barack Obama's grandiose scheme destined to reduce the quality of the best health care system in the history of the world, force millions of people who choose not to purchase health insurance to purchase it, greatly increase medical costs, our deficits and national debt, ultimately reduce patient choice, and place health care decisions in the hands of heartless bureaucrats is somehow a demonstration of compassion?

Why, in the course of his countless speeches on health care, has Obama rarely, if ever, praised American health care, which is the envy of the entire world? Perhaps for the same reason he doesn't praise America about much of anything, I suppose. If he's not trashing us, he's not talking about us.

So instead of lauding our record in leading the world in treating heart disease and cancer and extolling our medical research industry for producing more than half of the $175 billion of health care technology products purchased globally, he complains: "We are the only advanced democracy on earth ... that allows such hardships for millions of its people. There are now more than 30 million American citizens who cannot get coverage. ... We spend 1 1/2 times more per person on health care than any other country, but we aren't any healthier for it."

As to his claimed number of uninsured, at least we're making progress. He's temporarily removed the illegal aliens to lower the number from 47 million to 30 million. But he's still lying to say 30 million "cannot get coverage."

Again, 18 million of these make more than $50,000 a year and can afford health care but choose not to purchase it. And millions more have access to government programs and don't access them, which, incidentally, doesn't bode well for Obama's mandated universal coverage plan. These are Census Bureau figures of which Obama is well aware yet chooses to misrepresent, which is why it's hard to take him seriously when he complains about his opponents' alleged distortions.

And if he has such bipartisan intentions, why did he spend a significant part of his speech demonizing his opponents and misrepresenting their motives? On the one hand he says, "We must bring the best ideas of both parties together," but on the other he says, "But know this: I will not waste time with those who have made the calculation that it's better politics to kill this plan than improve it."

Obama implies you can't oppose his plan for reasons other than political ones. But in fact, we oppose it because it would destroy the best health care system in the world and would be one of the final nails in the coffin of America's free enterprise system. That's not politics, Mr. Obama; it's our survival as a free people.

The unvarnished truth, Mr. President, is that you are the one who won't consider proposals from the other side, other than your transparent feint to tort reform. You will not consider market-based solutions because you don't believe in the market. Otherwise, you would not spend half your waking hours devising ways to destroy it and demonizing the profit motive (as in this very speech) -- the fuel that drives economic productivity.

In this spirit of harmony, Obama also threatened to "call out" those who misrepresent what's in the plan, which presumably means he'll re-enlist his network of snitches to report to the White House those who attempt to set the facts straight.

Just imagine the singular audacity of a man who says he "will not sign a plan that adds one dime to our deficits -- either now or in the future" -- when the Congressional Budget Office already contradicts him on that claim, when it's impossible for him to know, in a dynamic economy, whether it will happen, and considering the government's history of vastly understating the costs of government-run health services, such as Medicare Part A and Medicaid. If he were really about cutting costs, he'd support market reforms, such as health savings accounts, and ending mandated coverage and tax laws incentivizing employer-provided insurance.

But of all his lies, none is worse than his claim concerning the public option, which he will not abandon, no matter how nervous it makes freedom-loving Americans.

Why, if he envisions only 5 percent of Americans "signing up for it," is it his hill to die on? The answer lies in his previously stated goal for the public option to pave the way to a single-payer, government-run system, in which the government ultimately controls health care decisions, wholly invades our privacy, and finally -- inevitably -- has to ration care using government criteria to determine who makes the cut.

Obama has shown his socialist colors too many times to fool the public by using free market terminology to destroy the free market. If he succeeds in passing this bill, it will be against the will of the people he claims to represent.