Sotomayor, Reverse Empathy and the Rule of Law 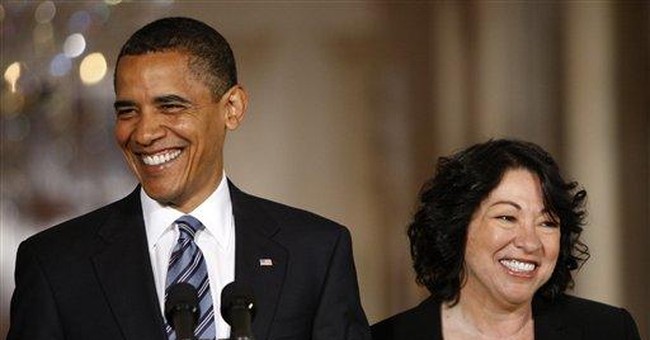 True to form, President Barack Obama -- in his remarks introducing his Supreme Court nominee, Judge Sonia Sotomayor -- said he was doing one thing while doing the exact opposite. He articulated his criteria for the optimal nominee yet chose someone who falls squarely outside those criteria -- as best we can tell.

But what's all the fuss? A foolish consistency is the hobgoblin of little conservative minds. Obama's mesmerized audiences are not supposed to pay attention to the meaning and context of his words, only to their aesthetic appeal and to the tonal qualities and modulation in his voice.

Obama said a Supreme Court nominee's two most important qualities are her rigorous intellect and mastery of the law and her recognition of the limits of the judicial role -- that a judge's job is to interpret law, not to make it.

Then came the "but," the exception that imperceptibly swallowed the rule. He quoted former Justice Oliver Wendell Holmes as saying, "The life of the law has not been logic; it has been experience." In other words: "Forget what I just said about how judges should interpret, not make, the law. I want my judges to have empathy. And don't tell anyone, but when I say 'empathy,' that's code for bending the law to achieve the results I want based on the selective empathy I have for certain victimized groups."

Before you fall for the upcoming protests that Sotomayor truly is a practitioner of judicial restraint, you might want to examine her record, including the case of Ricci v. DeStefano.

Frank Ricci is a dyslexic Connecticut firefighter who quit a second job in order to study up to 13 hours a day and paid someone to read his textbooks onto tape in preparation for the New Haven Fire Department's exam for promotion to lieutenant or captain. Though he received the sixth-highest score out of 77 applicants vying for eight vacancies, the city decided to deny him (and all other applicants) his earned promotion because no black applicants passed, even though the exam had been carefully constructed to ensure race neutrality.

Ricci was among 18 candidates -- 17 whites and one Hispanic -- who sued the city of New Haven for racial discrimination. The district judge issued summary judgment against the plaintiffs. On appeal to the 2nd U.S. Circuit Court of Appeals, Judge Sotomayor was one of three judges on the panel who issued a per curiam opinion (adopting the full reasoning of the district court without elaboration) affirming the district court's ruling.

The plaintiffs failed to achieve an en banc (entire court) rehearing of the appeal, but not without a strongly critical dissenting opinion from one of Sotomayor's fellow Clinton appointees on the court, Judge Jose Cabranes.

Cabranes noted that it was highly unusual for the panel to have issued a per curiam opinion, because the questions raised on appeal were "indisputably complex and far from well-settled." He wrote, "The core issue presented by this case -- the scope of a municipal employer's authority to disregard examination results based solely on the race of the successful applicants -- is not addressed by any precedent of the Supreme Court or our Circuit. … What is not arguable … is … that this Court has failed to grapple with the questions of exceptional importance raised in this appeal."

Sotomayor and her like-minded colleagues not only highhandedly denied justice to the aggrieved firefighters in this case but also tried to bury their injustice in their summary affirmation of the district court's ruling, something that obviously troubled Judge Cabranes. This is judicial activism at its most egregious and least transparent, when judges disregard the law to achieve the result they prefer and attempt to conceal their actions.

Again, this is what Barack Obama obviously has in mind when he discusses "empathy." In Ricci v. DeStefano, Sotomayor's empathy was for those who weren't aggrieved -- call it "reverse empathy" -- and she just didn't have any left for the poor saps who worked their tails off to earn their promotions -- just as Obama doesn't have any left for mortgage debtors who honor their obligations.

While defenders of Sotomayor will argue that she didn't engage in judicial reverse discrimination in this case, the facts yell otherwise. But if you're still in doubt that she would base her rulings on her personal feelings, be aware that in a speech at Berkeley in 2002, she said it's perfectly acceptable for judges to consider their "experiences as women and people of color" in making their decisions.

Also readily available (on YouTube) is videotape of her saying -- before remembering her comments were being taped and then feigning to backtrack -- that "the Court of Appeals is where policy is made."

Senate Republicans must take a stand and vocally oppose this nomination, not on the basis of partisan politics, but in defense of the rule of law and the proper role of the judiciary, principles the president is only pretending to honor.