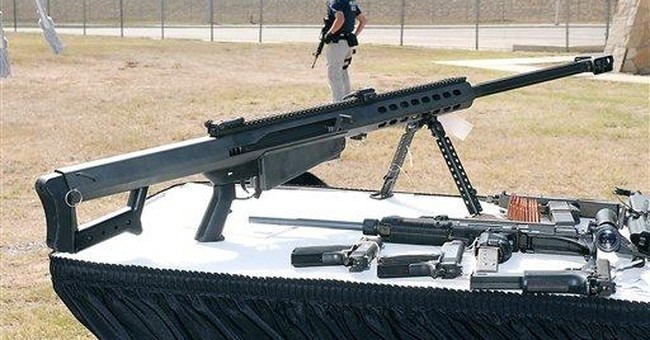 There has been a lot of outrage over the Department of Homeland Security's leaked summary report on "Rightwing Extremism," but by far its most odious aspects are its implications that military veterans are fertile targets for radical, violent groups and that right-wingers are inclined toward racism.

Information from this April 7 report was provided to law enforcement officials to help them prevent terrorist attacks against the United States.

The "Key Findings" are way light on objective facts but heavy on subjective opinion -- opinion clearly colored by the worldviews and biases of those issuing the report. Right off the bat, DHS admits it "has no specific information that domestic rightwing terrorists are currently planning acts of violence, but rightwing extremists may be gaining new recruits by playing on their fears about several emergent issues. The economic downturn and election of the first African American president present unique drivers for rightwing radicalization and recruitment."

There's more. "The possible passage of new restrictions on firearms and the return of military veterans facing significant challenges reintegrating into their communities could lead to the potential emergence of terrorist groups or lone wolf extremists capable of carrying out violent attacks."

At the risk of incurring the scrutiny of the DHS, I must say that these gratuitous sentences are outrageous. In the first place, I don't know anyone playing on "fears about several emergent issues" more than the current administration, of which the DHS is a part. Even when President Barack Obama is delivering a speech on the economy purportedly geared toward reassuring Americans that things will be all right, he has to stoke their fears and anxieties about other financial shoes he expects to drop in the near future. He and his aides are the ones who have signaled they have something to gain from keeping the public in crisis mode, that "something" being the opportunity to make foundational changes to our economy and the relationship between government and the private sector.

I know I'm naive, but the only violent right-wing extremist groups I've ever seen are those played in Hollywood by uninformed, whacked-out leftist actors. I've always wondered where all these Hitler throwbacks live. I've also never seen any of their recruiting signs posted at the local supermarket trolling for right-wing nut jobs prone to "Clockwork Orange" ultra-violence.

Can you imagine a pamphlet stuck under your windshield wiper as you return to your car after shopping because your subservient stay-at-home wife didn't do her biblical duty of attending to the grocery purchases that week? "Attention Fellow Fascists: Seeking Scripture-Reading, Bitterclinging Recruits to commiserate together the economic downturn and then act on it."

How convenient for this report to admit it has no specific information about plans for acts of violence by right-wing groups but then to go on to imply it's only a matter of time. It's kind of like those stubborn media reports decrying black-voter suppression in Florida in 2000, though the Commission on Civil Rights could never find any actual evidence to support its charge.

How dare these people issue such inflammatory garbage? How dare they say that the election of the first African-American president is a "unique driver" for radicalization and recruitment? I know it serves the political cause of the left to continue to divide the races, but this is a government-issued document we're talking about here that was designed to guide the approach to homeland security and law enforcement.

I don't care that this was only intended to be an internal report. This has to be affecting the thinking, direction and actions of those responsible for keeping this nation safe from true terrorist threats. This report seeks to poison the minds of agents to make them believe that returning veterans warrant greater scrutiny and that conservatives are prone to bigotry.

How dare they slander military veterans by suggesting they are more prone than the average citizen to criminal, seditious and violent activity? As The Washington Times' editors note: "A 2000 Justice Department study found that 'veterans were incarcerated at less than half the rate of adult male nonveterans.' Veterans are more likely to be peace officers."

Adding insult to injury, Homeland Security Secretary Janet Napolitano was all over TV depicting conservatives as Timothy McVeigh clones. Then she issued a disingenuous statement, that "we do not -- nor will we ever -- monitor ideology or political beliefs."

Well, Secretary Napolitano, you sure could have fooled me -- and anyone else who can read for himself. You (or someone in your charge) are not only monitoring the ideologies and political beliefs of conservatives but also poisoning law enforcement agents with a bias against them and suggesting their beliefs lead to violence against the government. Shame on you.