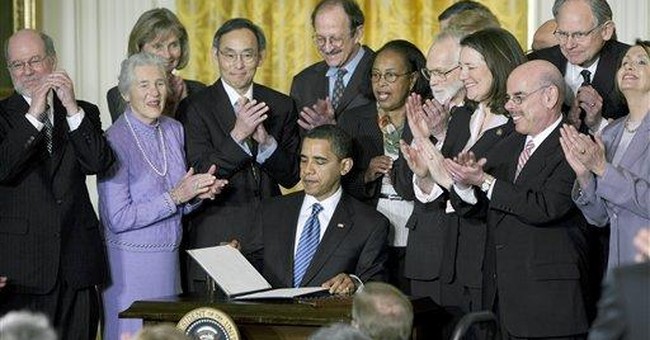 Does the following statement from Melody C. Barnes, director of President Barack Obama's Domestic Policy Council, strike you as a) patronizing or b) Orwellian? "The president believes that it's particularly important to sign this (presidential memorandum authorizing federal funding for human embryonic stem cell research) so that we can put science and technology back at the heart of pursuing a broad range of national goals."

Your answer should be both a and b, especially when considered in conjunction with another presidential memorandum "aimed at insulating scientific decisions across the federal government from political influence."

The president brazenly sermonizes against scientifically challenged conservatives while triggering federal funding of research that is scientifically controversial and preparing to impose cap and trade penalties on corporate America in deference to global warming junk science.

While you won't hear much about this in the mainstream media, there is a meeting currently taking place in New York City that serves as an ironic backdrop for Obama's embryonic stem cell order.

OneNewsNow.com reports that more than 70 scientists -- representing the views of tens of thousands more scientists -- are meeting at The Heartland Institute's second annual International Conference on Climate Change to make the case that politically motivated alarmism, not science, is driving climate change activism, which potentially threatens the sovereignty of the United States.

At the conference, European Union and Czech Republic President Vaclav Klaus likened those pushing global warming hysteria to the communists of Old Europe, who refused to listen to opposing views. Their goal, Klaus warned, is to control the public.

Sounds familiar. The Obama administration repeatedly implements policies that are in direct contradiction to its benign rhetoric, which is what I mean by "Orwellian." Consider its fiscal recklessness accompanied by promises of fiscal responsibility, including its staggering denial that it is promoting earmarks. Or its boasts of bipartisanship while shutting Republicans out of the legislative process. Or calling its plan to chill an employee's choice to opt out of union membership the "Employee Free Choice Act."

But Obama's statements while introducing his embryonic stem cell executive order truly take the cake. He said: "But after much discussion, debate and reflection, the proper course has become clear. The majority of Americans, from across the political spectrum and from all backgrounds and beliefs, have come to a consensus that we should pursue this research -- that the potential it offers is great, and with proper guidelines and strict oversight, the perils can be avoided."

It would take several columns to parse that statement alone, but just look at the misleading phraseology: "The majority of Americans … have come to a consensus." Assuming a majority favors embryonic stem cell research -- and even federal taxpayer funding for it -- is it not deceptive to imply that a majority constitutes a consensus?

Of course, those who agree on a proposition always share a consensus among themselves, but doesn't "consensus" suggest that there is almost unanimity on the issue?

The answer is yes. The Obama left repeatedly uses this type of language to manufacture the impression that only a fringe minority disagrees with the overwhelmingly accepted majority view. They declare a consensus when there isn't one and bully the true opposition from voicing their concerns. They do it with global warming, embryonic stem cell research, "intelligent design" theory and now Keynesian economics.

They have plenty of help from the liberal lapdog media. They dutifully report that Obama is lifting a ban on embryonic stem cell research when there has been no ban on such research, only a restriction on federal funding for it. Nowhere do they acknowledge the genuine ethical objections to or the scientific problems that have been encountered in such research. Instead, they just portray opponents of federal subsidies for the practice as Luddites.

You'll rarely hear from them about the failures and hazards of embryonic stem cell research, such as a report that embryonic cells injected into a boy caused multiple brain tumors. You'll never hear them speak about the increasing successes of adult stem cell research, even though adult stem cell science is less expensive, more accessible, probably involves less cancer-causing risk, and is not ethically controversial.

Beware; when the Obama left mounts its rhetorical high horse and tells us it is advancing science in furtherance of a consensus, it is most likely signaling that it is implementing a highly controversial, scientifically dubious policy whose opposition it intends to intimidate and silence with the formidable force of the presidential bully pulpit.