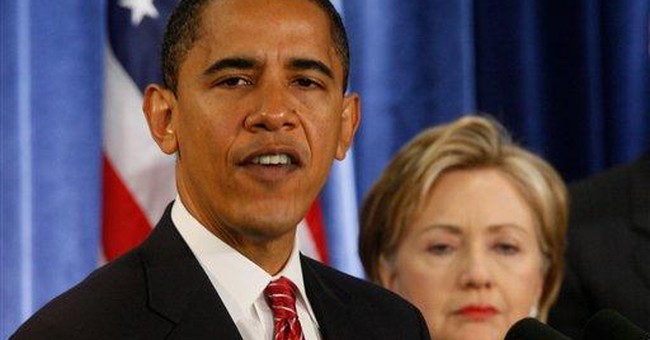 I am far less convinced than many that Barack Obama will be a centrist in office. Despite his announced future Cabinet appointees, I find it amazing that people are so willing to believe he'll change his stripes that fast.

Just what about Obama's very liberal voting record to date causes one to believe he'll be any different as president? I could see an aspiring presidential candidate establishing a centrist legislative record in the state and federal senates to make himself more electable as president, but not the other way around.

There's another red flag that should give pause to those hoping against hope -- pun intended -- that Obama will indeed govern as a centrist. The very liberal mainstream media are giving Obama nothing but plaudits for his presumed centrist appointments. If they truly believed he had changed his governing philosophy, they would be anything but sanguine.

Even the far-left blogosphere has not thrown in the towel yet. They're not ecstatic, but I think deep down, they know they have a fellow traveler about to take the oath of office. As one writer for the liberal Huffington Post put it, "He will be the president we want him to be."

Also, just because this or that appointee was in the Clinton administration does not mean Obama is a centrist. The media have whitewashed any liberalism associated with the Clintons and portrayed them as committed moderates.

How easily we forget that Bill Clinton had to be dragged kicking and screaming to sign welfare reform after rejecting it twice. How readily we ignore his liberal judicial appointments, not only the high-profile Supreme Court justices but also lower-level judges across the board who greatly impact American jurisprudence.

How quickly we give Clinton a pass for deliberately gutting the military he loathed while ignoring a terrorist threat he barely recognized -- a weakened military President Bush had to rebuild while taking the heat for the necessary expenditures. How mindlessly we credit Clinton for balancing the budget, when if he'd had his way and had not been checked by the Gingrich Congress, he wouldn't have come close to achieving that to which he never even aspired.

How casually we overlook that Bill and Hillary tried to impose socialized medicine on this nation -- an act of such procedural and substantive overreaching that it contributed to major congressional losses for Democrats. How foolishly we excuse Clinton for refining the art of class warfare in the modern era by falsely depicting President Reagan's across-the board-tax cuts as skewed to the wealthy and demonizing the greatest period of peacetime growth under Reagan as the "decade of greed."

But even if the Obama appointees seem more centrist than expected, we must recognize that Obama will be the boss, not the individuals in his Cabinet. People are raving about Obama choosing Robert Gates to continue as defense secretary, but they forget that when Bush chose him, many of us were surprised because Gates was in the "Iraq Surrender Group," which had sharply criticized Bush's policies in Iraq. But Bush did not soften his policies just because Gates came on board. He followed his own counsel, just as we should expect will be the case with Obama.

You should note that President Bush received no accolades from the press for choosing centrists such as Colin Powell and Condoleezza Rice. In Bush's case, it was just assumed they would do his bidding and not the other way around.

Even if I'm completely wrong about Obama's appointments, I believe it is exceedingly premature to conclude that Obama will govern as a centrist.

I just wonder what some of the people now rushing to applaud Obama as a centrist will say if and when he tries to: implement nationalized health care; drastically disarm our nuclear capacity -- unilaterally; sign into law card-check legislation, which would permit unions to undo secret balloting; appoint very left-wing activist judges; close Gitmo and relax our tough interrogation techniques; further open our borders to illegals; inaugurate a gargantuan "new" New Deal upward of $1 trillion in forced government spending, euphemized as a stimulus package; impose Draconian measures against our economy and liberties under the pretense of ameliorating man-made global warming; or radically alter the tax code to punish the "wealthy."

The liberals inside and outside the mainstream media will say he had to do it to get us out of the economic doldrums, which will be a lie. What will you conservatives say?