David Harsanyi
|
Posted: Nov 23, 2018 12:01 AM
Share   Tweet
The opinions expressed by columnists are their own and do not necessarily represent the views of Townhall.com. 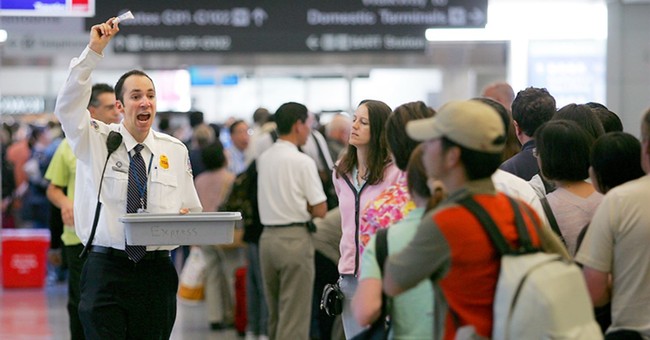 The other day -- after slogging through a check-in line at one of the nation's busiest airports, dutifully removing my shoes and belt, and checking my bag and pockets for other potentially dangerous items (water and loose change) -- I was pulled aside by a crack Transportation Security Administration agent so he could further investigate the contents of my carry-on. While waiting, I witnessed what looked to be a 10-year-old boy being molested by a 250-pound man.

Now, normally I would have reported this incident to the proper authorities. Inappropriate contact with a child, inside or outside his clothing, is a criminal act. But in this case, the proper authorities were the ones feeling up the kid, and the father had already protested the frisking -- although, like all of us, he probably understood that no matter how vociferously he objected to this bit of state-sanctioned criminality, it wasn't going to change anything.

Who knows? Maybe the kid had earned the attention of TSA by sporting that "Minecraft" hoodie. Or maybe his laptop had set off the explosive detection machine. Or maybe he was randomly picked. The boy looked innocent enough to me -- which may have been exactly what the little would-be villain had in mind. When the father inquired, the agent told him -- right before touching his son's crotch -- that this sort of thing has become necessary because of drug mules using children.

If you don't think the terrorists have won, you probably haven't visited an airport in a while. Not only do these places needlessly gobble up hours of our days and billions of our dollars but here we also collectively lose all dignity and act like a bunch of automatons just so they'll let us out of the place. Though sometimes it seems as if we might never escape. If we really wanted to slow the caravan from Central America down, we would make the migrants enter through a TSA checkpoint.

It is at those checkpoints that we suspend our disbelief and pretend that (often) disheveled and (very often) rotund government agents who separate us from our water bottles possess the expertise to ferret out terrorist plots. (By the way, is there not a single physical requirement needed to hold this allegedly vital security job?)

Then again, it's one thing to force millions of adults to schlep through these slow-moving lines so their toiletries can be scanned by some uninterested government worker -- on occasion sharing a few moments of rough intimacy with a blue-gloved stranger -- and another for kids to be used as props in this production of security theater.

If you're thinking, "Hey, David, you have no expertise on issues of security, and you know nothing about how to stop bad people from getting on planes," you're 100 percent correct. That only means I could probably work for the TSA.

Let's not forget that in 2015, the TSA sent internal investigatory units, "red teams," to airports around the nation to see whether they could sneak explosives and guns through the screening process and onto planes -- which they did 67 out of 70 times. Although I'm no security specialist, by my rough calculations, that means that the terrorist success rate was over 95 percent. Maybe the 5 percent who were nabbed by TSA agents posed as preteens.

This information, incidentally, was only leaked to the public. We have no idea whether the TSA is performing any better today. But even if it has vastly improved -- say, the agency is now stopping 70 percent of fake terrorists -- it would mean the billions of dollars spent on airport security is still being wasted. In a merit-based environment, this would result in mass termination and a complete overhaul of the system. Instead, the Department of Homeland Security -- a Cabinet-level department formed in 2002 to ensure that a number of inept agencies could work together incompletely -- is still patting down old ladies and preteens. Nothing has changed.

The TSA claims that it has employed "modified screening procedures for children 12 and under that reduce the likelihood of pat-down screening." Is there any evidence of this? And why do we allow any children to be patted down after they've walked through body scanners and metal detectors anyway? There is no plausible reason for a grown person to put his or her hands on a child in this way.

Obviously, security isn't going anywhere. Obviously, security measures also act as a deterrent and can't always be properly measured. Of course, I understand that the agent was only doing his job. Whether his contention about drug mules was true or not, though, you might not be surprised to learn that this kid didn't end up having heroin stuffed in his underwear. Even if he did, is it really worth subjecting hundreds (thousands?) of boys and girls -- not to mention septuagenarians, the disabled, etc. -- to this kind of search on a daily basis? There has to be a better way.