David Harsanyi
|
Posted: Jun 29, 2018 12:01 AM
Share   Tweet
The opinions expressed by columnists are their own and do not necessarily represent the views of Townhall.com. 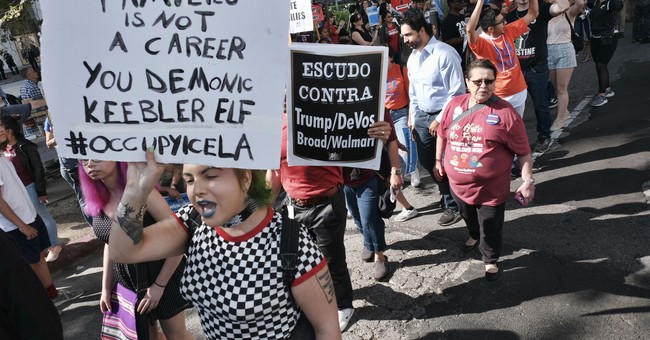 It looks as if the next phase of our ginned-up national moral panic will feature the public shunning and harassment of people we disagree with. And in a free country, even the pretend oppressed can kick imaginary Nazis out of their establishments, as we saw when the co-owner of The Red Hen in Lexington, Virginia, booted White House Press Secretary Sarah Huckabee Sanders from her restaurant.

Certainly, politicos don't deserve safe spaces from peaceful protest or confrontation. You want to make their lives miserable, humiliate them and show everyone how principled and right-thinking you are? By all means, stop them from having those chimichangas. That'll teach 'em.

But don't fool yourself into self-idealization. You're no budding Martin Luther King Jr. No matter what you think of President Donald Trump, you're still an insufferable jerk. You're just a member of a blindered tribalist mob, imbued with a false sense of certitude that allows you to justify incivility. That is to say, you're like a Twitter troll made real.

It should be noted that this kind of harassment isn't widespread in the real world, though it is widely justified by liberals. Many leftists have convinced themselves that members of the Trump administration -- in place after a free and legal election and, to this point, comporting with the laws of American governance -- should all be in front of a judge in The Hague. It isn't only about the separation of families at the southern border. It's about tax cuts. It's about Obamacare. It's about everything. Republicans are regularly accused of being accomplices to murder. The hysterics that bloom from that kind of position create a swelling exasperation among Democrats that borders on religiosity.

"If you see anybody from that Cabinet in a restaurant, in a department store, at a gasoline station," said Rep. Maxine Waters, erstwhile outlier of the irrational left and now hero of the "resistance," "you get out and you create a crowd and you push back on them and you tell them they're not welcome anymore, anywhere." Create a crowd, huh? Not welcome anywhere? That's a tough spot.

Now, should it even be said that if any conservative politician had called for mobs to badger Democratic officials when they're at the supermarket, the nation would be thrust into a national dialogue about the growing and perilous incivility on the right? There would be a flood of anxious op-ed pieces and cable news roundtables featuring chin-stroking hypocrites contemplating the future of discourse in America. No one would be spared. Every Republican politician on earth would be asked to condemn these comments.

But at least Waters doesn't lean on some rickety whataboutism for the practice of hounding members of the Trump administration out of their local supermarkets.

"Some who defend baker's right to refuse service to gay couples, whine re ppl refusing service to a person who's the face of a deceitful Administration," tweeted the perpetually confused Ana Navarro. "What's good for the goose, is good for the Red Hen. Difference is, being gay is not a choice. Being an accomplice to Trump, is."

The problem with this widely used talking point isn't the tit-for-tat vacuousness; it's the flawed analogy. Jack Phillips never refused service for a gay couple in the first place. That's simply a smear that the left has endlessly repeated. Phillips, whose shop was open to everyone, refused to design a unique cake that would have featured a message that he felt would undermine his faith. He would have refused to make the same cake for a straight couple -- or any kind of cake that would have undermined his faith for any kind of person.

The co-owner of The Red Hen, on the other hand, refused service for someone simply because she disliked her beliefs. She was free to do so. But Sanders didn't demand that the chef at The Red Hen create a specialized "Make America Great Again" dish.

Of course, to some extent, President Trump invites this sort of reaction. Then again, to some extent, political Trump exists because of the decades of hyperbolic attacks on Republicans. Fact is, Democrats make little distinction between soft-spoken moderates such as Paul Ryan and crude sometimes-conservatives such as Trump. Democrats have been comparing Republicans to Nazis since the 1960s.

But if liberals really believe Sanders works for an "inhumane and unethical" administration as the co-owner of The Red Hen does, that's fine. (Although, it's interesting that her supposed moral outrage seemed to be wholly predicated on policies that existed under the Obama administration.) I'm sure Republicans can relate. I'm sure social conservatives saw the Obama administration's support of abortion with virtually no limitations as being just as morally repugnant.