David Harsanyi
|
Posted: Jan 19, 2018 12:01 AM
Share   Tweet
The opinions expressed by columnists are their own and do not necessarily represent the views of Townhall.com. 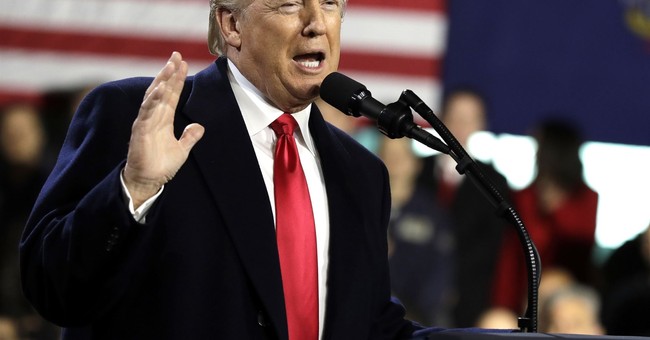 Every morning, it seems, President Donald Trump's most determined opponents awake to find out what sort of obnoxious, fact-challenged, puerile, norm breaking thing he has offered that day and say to themselves: "Oh, that's nothing. We can do something dumber than that!"

So the nation wades from one bizarre and nonsensical controversy to another. As I write this, I can't even recall what topic we were debating last week, but I'm certain it was idiotic. Part of the problem is that those who drive coverage of Trump are obsessed with the president in unhealthy ways, ways that have absolutely nothing to do with policy or governance.

For a couple of weeks now, our self-styled guardians of democracy have engaged in a concocted controversy about the president's mental state. It wasn't only liberal columnists plying their readers with this wishful thinking; the entire city of Washington, according to Politico, was consumed with using the 25th Amendment to remove the president. It was a major topic of conversation on the Sunday shows. Former Trump booster Joe Scarborough squeezed a week of coverage out of it.

When the president's physician, Dr. Ronny Jackson -- a man who has been the White House doctor since 2006 -- explained that Trump is, in fact, "very healthy" and has "incredible genes" and excellent cognitive health, the White House press corps was in disbelief. I mean, Michael Wolff had told us the opposite was true.

One reporter asked why Trump "appeared to slur his words" at a recent press conference. Another reporter asked why Trump had the "sniffles." Everyone was worried about his insalubrious meal plans. "Is he limited to one scoop of ice cream now?" a real reporter asked the presidential doctor. Jonathan Karl of ABC asked, and I kid you not, "Can you explain to me how a guy that eats McDonald's and Kentucky Fried Chicken and all those Diet Cokes, and who never exercises, is in as good of shape as you say he's in?" Confirming what everyone in the world who eats right and exercises daily yet still struggles to keep their weight down already knows, Jackson answered, "It's called genetics.

More importantly, the doctor also said Trump passed an extensive cognitive exam that tests for "all those things" and repeated the conclusion that the president doesn't suffer from mental issues. So the conspiracy theories began on social media, not by random tweeters but by White House correspondents of the nation's leading newspapers and leading reporters of the nation's biggest networks.

CNN chief medical correspondent and former Hillary Clinton adviser Dr. Sanjay Gupta asked Jackson, the doctor who actually examined the president, whether Trump has heart disease. Jackson said no. On Wednesday, Gupta claimed on television that Trump does have heart disease. (It took a little more than one year to go from "Russia stole the election!" to "Trump is too fat to be president." Those 15 to 20 pounds are a killer.)

There is simply no way we would have gone through a similar round of frenetic mental-health coverage if the president had a D next to his or her name. Yes, a person can be cognitively sharp yet unfit for office. But here's the problem: Many journalists, including CNN's Brian Stelter, spent the past week baselessly speculating about the mental health, not the overall fitness, of the president. They did so based on their intuition and hopes, rather than any genuine evidence. "We're just asking questions" is the sort of thing birthers tend to say. Be better than the birthers.

More significantly, the truth is there are a bunch of people in this country who don't really care about Trump's mental health, the future of democracy, the decorum of the office, the Constitution, collusion or the truth. They're personally insulted by the outcome of the last presidential election and happy to embrace any story that helps them try to overturn it. Some of them, I'm positive, are hopeful that Russian interference changed votes so they could continue to spin their tale of a stolen election.

These folks are often Trump's greatest gift. The day-to-day drama is often brought on by the president's words, which are sometimes ugly and often self-destructive. Much of it, though, is exacerbated by his adversaries, who are ridiculous in their own special ways.

Anyway, on to the next nonsensical controversy.