Why Are We Still Bowing? 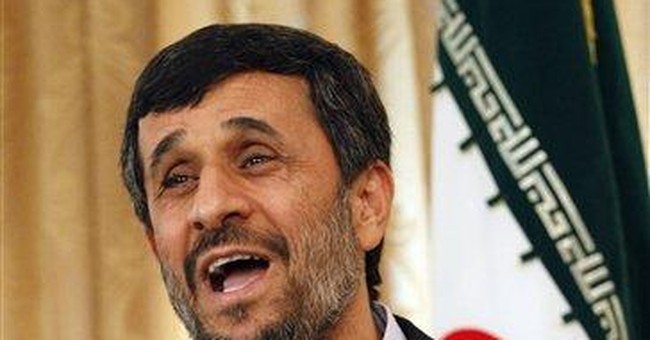 Not long after President Barack Obama gave his conciliatory speeches to the Islamic world, he chose not to meddle in the sham election of Iranian President Mahmoud Ahmadinejad. In fact, he offered not a word of support for the men and women who took to the streets against that totalitarian regime.

Then, as "manmade disasters" continued to erupt spontaneously around the world -- including at a United States military base -- the administration held steadfast in using non-offensive euphemisms, lest anyone be slighted by our jingoist need to use words that mean something.

And when the president was given a chance to fulfill a campaign promise and acknowledge the genocide of 1.5 million Christian Armenians by Turks during World War I, he instead did everything he could to block the resolution.

These days, as Christian farmers are being slaughtered by Muslim machetes in Nigeria, outrage from the White House is difficult to find -- though it made sure to instruct our Libyan ambassador to apologize to "Colonel" Moammar Gadhafi after he offered some mildly critical comments about the dictator's call for jihad against Switzerland (true story).

Gadhafi can be forgiven, but there are transgressions that can't. One such sin was perpetrated by Israel after the nation's decision to allow a new housing project to be built for its citizens in its capital city, Jerusalem.

The White House became so agitated with the future 1,600-unit housing project -- and the ill-advised timing of the announcement, which came during Vice President Joe Biden's visit -- that the casual onlooker might have been led to believe that the Jerusalem neighborhood in question was part of some unfinished negotiation with Palestinians or even that it was one of those "settlements." It was neither.

Still, according to The Jerusalem Post, Hillary Clinton telephoned Israeli Prime Minister Benjamin Netanyahu -- who, along with many other Israeli officials, apologized for the ill timing of the project's announcement -- to "berate," "rebuke," "warn" and "condemn" Israel. White House senior adviser David Axelrod used NBC's "Meet the Press" to say that the incident was an "affront," an "insult" and "very, very destructive."

As the administration was manufacturing this anger, the Palestinian Authority was preparing the newly minted Dalal Mughrabi Square. You know, just a place for folks to gather and commemorate the 32nd anniversary of 1978's Coastal Road Massacre, in which 37 Israelis -- 13 of them children -- were murdered in a bus hijacking.

An American named Gail Rubin, who happened to be snapping some nature pictures in the area, also was gunned down.

No worries. No affront taken. That's not "very, very destructive" to the process. We are above the fray, above frivolous notions of "allies" or "friends." History only matters when our enemies deem it important. We don't want to tweak the fragile mood of the Arab street.

If the purpose of this manufactured angst is to pressure Israel into handing parts of Jerusalem over to a corrupt Fatah (we don't need to discuss Hamas, which, unlike Fatah, has the decency not to pretend to recognize Israel's right to exist), then someone is exhibiting a profound naivete. And if the purpose of pursuing a Jewish-free West Bank is to create good will with the Muslim world, good luck.

It is this administration's prerogative to change our foreign policy -- and allies. Yet it would be nice if someone reiterated to our new Muslim friends that the United States has yet to deploy a single soldier to risk life and limb for the security of Israel. It has, however -- only recently -- sent thousands of Americans to perish for, in part, the cause of Muslim freedom in Iraq, Afghanistan and Kosovo.

That sacrifice alone should be enough to absolve us from any more bowing -- or kowtowing.