Peculiar Be Thy Name 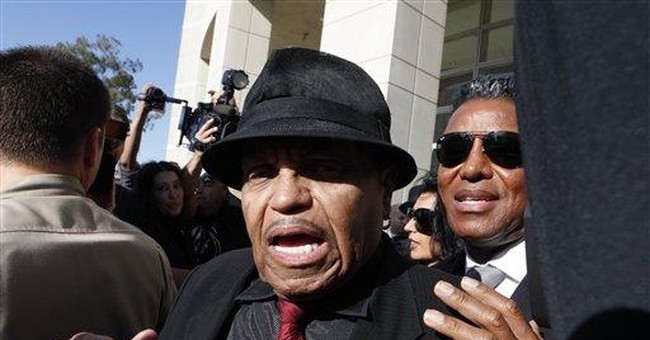 Perhaps no finer Christian name has ever been bestowed upon a child than the one Jermaine Jackson, of Jackson 5 fame, came up with for his son: Jermajesty.

We can forgive the famous for not being bound by the norms of civil behavior and branding their offspring Kyd or Suri or Trig or Satchel or Apple (or, apparently, any inanimate object that happens to be lying around), but what has happened to the rest of us?

Is there no better way to let everyone know how special your uber-gifted little one is than digging deep into Irish folklore, Apocryphal gospel or Tolkien for a name? Is the humiliation of sending him to school with something as pedestrian as Joe too much to bear?

Researchers at San Diego State University recently confirmed what any parent involved in a play date already knows well: Ordinary won't do anymore. The study found that nearly one-third of boys received one of the 10 most popular names in 1955 and that by 2007, fewer than 1 in 10 received a "common name."

My childhood acquaintances were a monotonous blend of Jefferys and Lisas and Tonys -- and even "Butch," who, unlike today's Finn or Adonia (kids who, let's face it, have no choice but to be creative writing majors or strippers), is undoubtedly, unlike me, engaged in some manner of productive and masculine work.

LiveScience reports that researchers believe this explosion of unusual baby names is a cultural shift that ignores the once-valued "fitting in" and embraces the frowned-upon idea of "standing out."

Once I heard it put that way, I was completely on board and primed to name my next kid Davinity.

"When taken too far," the piece warns, "this individualism could also lead to narcissism, according to study researcher Jean Twenge, of San Diego State University." Twenge seems to have a major hang-up about the imagined plague of individualism sweeping the American landscape (as if parents in the '50s wanted their kids to toil on assembly lines in lifelong anonymity).

She goes on to explain, "There's been this cultural shift toward focusing on the individual, toward standing out and being unique as opposed to fitting in with the group and following the rules."

Though Twenge is a professor and I a mere writer with barely enough intellectual ability to use two mildly uncommon girl names I found lying around biblical text, I wonder what's wrong with standing out and being unique?

It's not as if we need to fret too much about "following rules." Any individualism or freethinking is wrung from those little souls with ruthless urgency as public schools relentlessly instill the importance of "collective good" early and often.

Yes, one can lament some loss of cultural identity and continuity, because there are some conflicting messages being sent -- say, Caleb Berkowitz or Jeremiah Yang. But diversity (and I have it on good authority from numerous bumper stickers) is our strength, and creative christening only adds richness to our society.

My hope is that we continue to name kids Jet, Juice Box or Whathaveyou. Then again, the process has become so atomized that in a few years, you might start thinking about Mary or John. You know, if you're really going for something unusual.