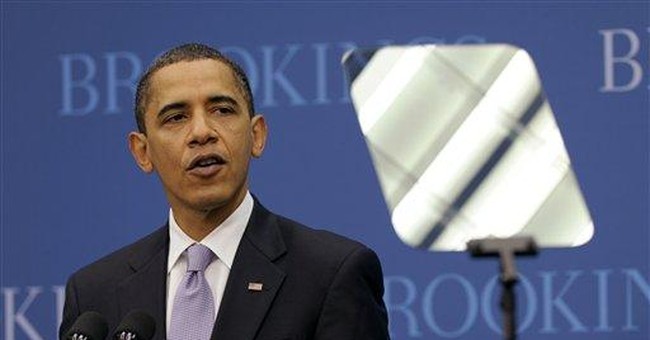 We don't need a cap-and-trade deal. What we need is a RICO trial.

Every now and then, apparently, history challenges us with a crisis far too important to be left to the democratic process or the vagaries of public opinion. In these instances, the enlightened, the powerful, the moral must act swiftly.

So sayeth the Obama administration this week, empowering the Environmental Protection Agency to police greenhouse gases as a danger to public health and welfare, thus giving the agency discretion to regulate ... well, anything it pleases -- or, I should say, whatever is left.

"These long-overdue findings cement 2009's place in history as the year when the United States government began addressing the challenge of greenhouse-gas pollution and seizing the opportunity of clean-energy reform," explained EPA Administrator Lisa Jackson. "This continues our work towards clean energy reform that will cut GHGs and reduce the dependence on foreign oil that threatens our national security and our economy."

Jackson, of course, is an administrator, not a policymaker. She is charged neither with meditating on our energy cravings nor with solving our national security dilemmas. She isn't charged with tackling the nation's economic problems, either. In fact, any more assistance from D.C. on that front and we all will be peddling frozen apples in the bruising cold.

What Jackson has done, though, is inadvertently offer the strongest case against the EPA's dubious decision on carbon dioxide. If the EPA's actions really converge on as many spheres of public life as Jackson asserts, then a single crusading regulatory agency is in no position -- and should have no authority -- to regulate all of them.

No worries, we're told. The EPA wouldn't do it. It's a bluff. It has other things in mind. In this case, it is all about hastening much-needed "action" on climate change by employing a technique universally known as blackmail.

Obama, as we know, has no authority to enter into a binding international treaty (isn't the Constitution irritating?), as any treaty must be ratified by the Senate -- a Senate that won't pass a cap-and-trade scheme any time soon if we're lucky.

Now that the EPA can duplicate any suicidal emissions pact world leaders can cook up (exempt: emerging nations, poor nations and nations that value prosperity), the president would not need to ratify a thing. And who needs treaties when the Obama administration already has threatened the Senate with unilateral regulations on greenhouse gases unless a cap-and-trade bill is passed? The administration need only mirror the agreement it can't make.

In effect, the EPA is warning most of the nation's businesses that burdensome regulations are coming unless the president is suitably mollified with a law that severely caps carbon emissions. In other words, figure out your own punishment, kids, or we'll have to come up with one for you. You know, choice.

The administration also acts as if this were the last chance to save mankind, when, in fact -- on the heels of the ClimateGate scandal, sagging poll numbers on warming hysteria and genuine economic worries (worries that would be exacerbated by more growth-inhibiting regulations) -- it might only be its last chance to cram through a framework for harsh emissions standards.

Granted, there are a few obstacles standing in the way. Votes. People. Process. And so on ...