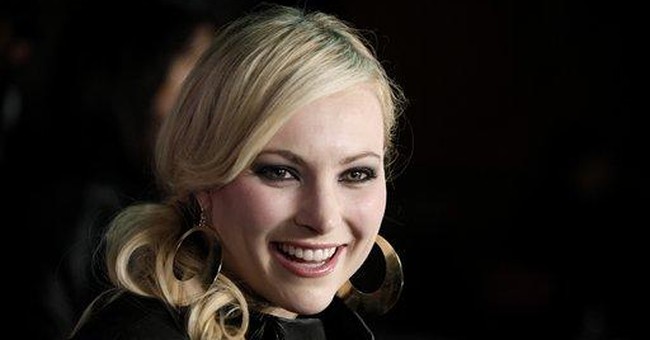 Not long ago, Meghan McCain, maverick progeny and rising media star (because, no doubt, of her impressive intellectual gifts), posted a cleavage-intense picture of herself on her Twitter account. "For years," the 25-year-old would lament later, "I have struggled to accept the fact that the way I look in a tank top comes off more 'sexual' than a flat-chested woman."

Then feel free to wonder why an intelligent young woman feigns astonishment when her candid shot creates a hubbub online after she disseminates the shot to 76,000 followers. Isn't that the point of posting on Twitter? Highlighting everything? Even your socio-political thoughts on cup sizes?

who is too dense to recognize the miracle of letting "followers" know he hates raisins or that he loved the finale of "Mad Men."

Now not only am I expected to transmit this minutiae mere seconds after I think it but also some 20-year-old in California has decreed that I must do it within the brevity of 140 characters. This need for conciseness, in fact, induces normally articulate friends of mine to write in Prince lyrics -- recklessly using "2" and "4" and "U" as words.

To this point, I've found Twitter so aggressively worthless that I was forced to research exactly what I am missing. In the process, I stumbled across a useful New York Times tech column penned by David Pogue that clarified all. The headline read, "Twitter? It's What You Make It."

Despite this, I can't begin to add up how many times, as a member of the media, I've been instructed that I need to tweet by people who have absolutely no clue what tweeting means. How Twitter helps journalism is yet to be determined.

But the deepest mystery of Twitter is why celebrities and elected officials take part. After all, we all know they can't write their own lines.

Now, admittedly, Twitter can be entertaining on occasion, as it turns out that 140 characters offers a great chance to be misunderstood -- and an even greater chance one will expose his inner troglodyte.

In these past few weeks alone, a clueless Colorado state Sen. Dave Schultheis tweeted, "Don't for a second, think Obama wants what is best for U.S. He is flying the U.S. Plane right into the ground at full speed. Let's Roll." NFL running back Larry Johnson took time out from his busy day of stinking at his job to ridicule his coach and question the heterosexuality (crudely) of a critical tweeter. He lost his job.

So you see, though only a reported 11 percent of Twitter's users are actually teenagers, nearly everyone who participates may end up sounding like one. (Young people have the good sense to head to MySpace, where they freely can post sexually provocative pictures -- with music!) I certainly have no cleavage to ratchet up my "follower" numbers.

As a blogging, Facebooking, texting American who values the explosion of democratic user-generated Internet content and its contribution to intellectual debate, political activism, government transparency, entertainment, access to data and community, I can safely say I still see no reason to tweet.

Naturally, this phenomenon is growing by approximately 1 million percent yearly. Maybe this is just where I get left behind by technology. Still, I'm sticking with Google's CEO, Eric Schmidt, who called Twitter the "poor man's e-mail system" -- and considering e-mail is completely free and allows you to form complete sentences, that's not exactly a ringing endorsement.