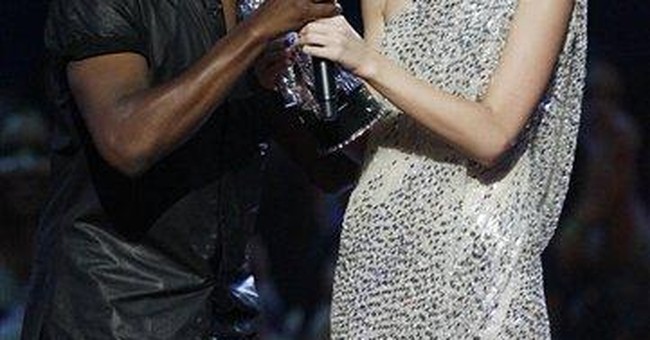 If you've been paying attention lately, you may be under the impression that the United States is spiraling into mass incivility.

The evidence keeps mounting: Rep. Joe Wilson's yelling. Serena Williams' yelling. Kanye West's ... whatever. All of these uncouth characters have been strung together by critics to establish, indisputably, that there is a societal explosion of boorish and coarse behavior.

On the political front, columnist Kathleen Parker calls this "a political era of uninhibited belligerence." House Speaker Nancy Pelosi, lamenting an imaginary climate of violence, wishes "we would all, again, curb our enthusiasm in some of the statements that are made."

Such a preposterous statement should be actionable. Pelosi, who only recently compared her political opponents to Nazis, isn't exactly a paragon of civil discourse. American politics always has been unsightly. Most of the time, in fact, far worse than today.

Have we transformed into so brittle a citizenry that we are unable to handle a raucous debate over the future of the country? If things were quiet, subdued and "civil" in America today, as Pelosi surely wishes, it only would be proof that democracy isn't working.

It's no accident, either, that those in power are generally the ones choking up about the lack of decorum. The truth is we could use far less bogus civility in Washington.

Some of us, for instance, would prefer the superb system of debating used by the British Parliament. Watching those foppish MPs holler "poppycock, sir!" at one another during speeches is a pure pleasure. The British trade courteousness for a more productive, more honest and, most importantly, more entertaining debate. (The occasional Taiwanese-style free-for-all parliamentary slap riot wouldn't hurt C-Span's ratings, either.)

Instead, here at home, stilted House rules dictate that a member of Congress may not refer to the government as "something hated, something oppressive." Its members shall not call any unnamed officials "our half-baked nitwits handling foreign affairs," no matter how true the statement may be. And they never, ever can describe the president as a "liar" or a "hypocrite" or claim he is "intellectually dishonest."

It's a miracle anything is discussed, actually.

Obviously, Rep. Wilson broke the rules when he rudely blurted out, "You lie!" The vulnerable souls inhabiting Congress -- people who spend half their lives and millions of dollars smearing political opponents as child-hating, warmongering, brown-shirted socialists -- were profoundly offended by this act of rudeness. For many, it was another sign of the intensifying coarseness in American society.

Now, tennis (unlike politics) is, without question, one of the most civilized sports in the world. If there were any chance that Williams would shove an EXPLETIVE ball down the EXPLETIVE throat of a line judge, it might even be a sport worth watching. But despite the overwrought finger wagging of critics, the incident tells us nothing about society at large -- other than that athletes can be competitive and lose their tempers.

Neither does a hammered celebrity rapper making an idiot out of himself on the MTV (the exemplar of proper etiquette, no?) Video Music Awards. Yes, I, too, yearn for the bygone era of hip-hop chivalry, but those days, sadly, have passed.

Where does that leave us? Exactly where we were 10 years ago -- or 20. I've been around this country a bit, and most of the people I've encountered have been extraordinarily civil -- even if they occasionally drink too much or embarrass themselves or curse at one another while playing pickup basketball.

This new focus on civility is meant to cloud another issue. Let's not confuse personal civility with political civility. A "civil" citizenry can mean a pliable citizenry, waiting -- sometimes forever -- to speak their minds.

We have no duty to say "please" and "thank you" to elected officials. Not yet.