How To Lie With Statistics -- Again 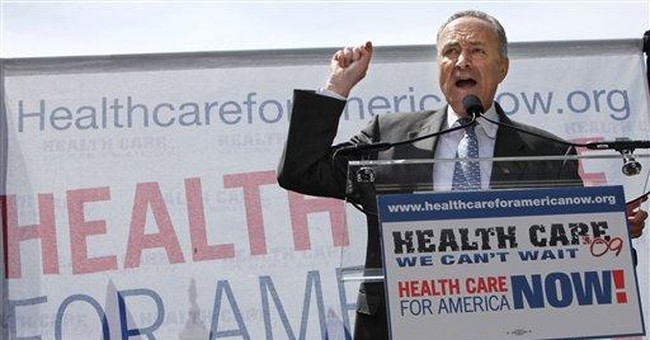 Did you know that about 300 million Americans went without food, water and shelter at some point last year?

I am a survivor.

If you were blessed with the prodigiously creative and cunning mind of a politician, that kind of statistic -- meaningless but technically true -- could be put to good use.

In the entertaining 1954 classic "How To Lie With Statistics," Darrell Huff writes, "Misinforming people by the use of statistical material might be called statistical manipulation … (or) statisticulation."

One of the most persistent examples of modern-day statisticulation is the sufficiently true claim that 46 million (it becomes 50 million when senators really get keyed up) Americans don't have health insurance.

Set loose on the public's compassion, this number is a powerful tool in the hands of eloquent orators, such as President Barack Obama, when they're peddling government-run health care reform. And no matter how often the figure is debunked, no matter how many studies point to its inexact nature, it's just too politically inviting not to embrace.

It is true that the 46 million figure is based on unreliable Census Bureau data. But even the less unreliable Congressional Budget Office puts the number at about 31 million. And even that number, former CBO Director Douglas Holtz-Eakin claims, is an "incomplete and potentially misleading picture of the uninsured population."

For one reason, the uninsured figure counts all Americans (and illegal immigrants) who have been uninsured for any amount of time during a year, even if they happen to be between jobs or changing insurance plans or on family visits to Guatemala.

According to the CBO, 45 percent of the uninsured are uninsured for four months or less, which seems like a pretty positive number to me.

Then, another portion of uninsured Americans already qualify for existing government health insurance programs -- and government already controls 46 percent of spending on health care -- for which they have not signed up.

The CBO estimates that as many as 15 percent of the chronically uninsured are already eligible for help. The Urban Institute (hardly an advocate of free market fundamentalism) found that 25 percent of the uninsured qualify for some program.

In a study for the National Bureau of Economic Research called "Is Health Insurance Affordable for the Uninsured?," Stanford economists say, "Based on a plausible range of definitions and assumptions … health insurance is affordable for between one quarter and three quarters of adults who are not insured."

There are obviously inconveniences -- children and mortgages, for instance -- that quickly can make $50,000 seem like a pittance. Then again, 27 percent of all adults in their 20s (many, I presume, without offspring) choose not to have health insurance. Many of them surely have the means to purchase insurance but after meticulously considering the trade-offs (imbibing or insuring?) say no thanks.

These facts do not undermine the argument for nationalized health care. (History and common sense do that already.) They do, however, point out that many statistics, to quote Huff again, get by "only because the magic of numbers brings about a suspension of common sense."