Be a Patriot: Pay Up! 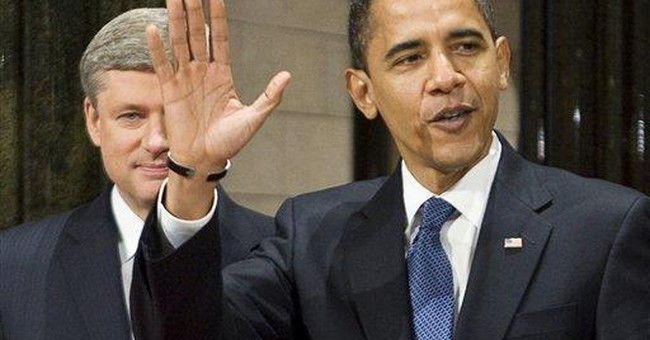 Why, for instance, should I be on the hook to pay those grating high-interest credit cards I signed up for? Or those detestable car payments? My cable bill's sorta steep, too.

For you folks who are less than ecstatic about straightening out my fiscal affairs, well, I have two things to say: 1) Don't be selfish. 2) Forget everything you ever have heard about the American Revolution. Taxes, extreme government spending and wealth redistribution are patriotic. And you're going to see so much patriotism your kids will be pigtailed uber-nationalists by the time they hit kindergarten.

This week, Barack Obama heroically signed away $787,000,000,000 for so-called stimulus. He reportedly praised a Republican supporter for her patriotism in supporting the bill -- which, by logical extension, means that those who voted "no" are unpatriotic toads.

Your president loves his country so much that he would sacrifice up to $275,000,000,000 of your money to keep the housing bubble bubbling, with almost no legislation or debate required. Obama claims his new mortgage bailout would give a second chance to those "homeowners who have played by the rules (and) have been making their payments on time."

Who knew that playing by the rules comes with a government warranty? After all, I may play by the rules and engage in bizarrely self-destructive behavior. You may not. You may have played by the rules -- invested in the stock market, a home, a business, a career -- and found yourself stuck with a financial dud.

But as every 2-year-old knows, consequences are the incentive to avoid risky behavior. So why are we rewarding failure and attempting to abolish consequences? Many of the homeowners government is bailing out took the unnecessarily chancy loans that helped fuel the financial jam we're in.

More than 90 percent of Americans, though, pay their mortgages on time, follow the rules and, for the most part, live in homes they can afford. You don't deserve help. Though luckily, you will be subsidizing those who acted recklessly. Remember: country first. And if you happen to be a renter who pinched and scraped in hopes of one day owning a home responsibly, you are out of luck, too. Just consider it your patriotic duty.

The more irresponsibly you behave, in fact, the more government works for you. This week, the federal government doubled its commitment to Fannie Mae and Freddie Mac, promising to reimburse the companies up to $400,000,000,000 for the losses they sustained from their investments in mortgage loans.

Yes, the same Freddie and Fannie -- once implicitly guaranteed by government and now explicitly run by government -- that helped, through social engineering, to push us into recession. It is vital, apparently, that we keep them afloat.

The only business plan that is more staggeringly counterproductive came from the auto industry, which is back for another bite.

After meting out nearly $1 trillion of government expansion in the stimulus -- including the canard of "tax relief," which, in effect, was only more wealth spreadin' -- how can Washington say no to anyone?

Obama has told us the American dream must be saved. So far, his remedy entails government rewarding bad behavior, encouraging dependency, subsidizing failure and penalizing success and prosperity.

It's the new patriotism. So don't complain.